What is the basis for Lombard's view that the basis of justification for OT men was different than for OT women?

While reading J. V. Fesko's The Theology of the Westminster Standards, I found an interesting tidbit in the context of his discussion of justification in Reformed theology:

Reformed theology, of course, rejects this idea, holding that justification is by faith alone (not circumcision nor good works). But the idea that men were justified on a different basis than women is still intriguing, so I'd like to better understand the view.

What is the basis for arguing that men and women in the OT were justified through different means? More specifically, here are a few aspects of the question:

I'd like to restrict the question to the views of Lombard and other scholastics – here I'm not looking for post-Reformation versions of this view.

But of course, Lombard's view is based on the incorrect assumption that circumcision started with Abraham.

The practice of circumcision predates Judaism by more than 10.000 years. Circumcision is the world's oldest planned surgical procedure, suggested by anatomist and historian Grafton Elliot Smith to be over 15,000 years old, pre-dating recorded history.

The Semites most likely copied the practice from the Sumerians. Abraham is believed to have had circumcision performed on himself and on all male relatives and servants in his household whether of Semitic origin or not, as a mark of the covenant between his God and these people, known thereafter as His Chosen People, the Children of Israel. Historians date this as around 1800 BCE, clearly long after circumcision was introduced by the Sumerians and Semites.

So just as some have assumed that circumcision started with Abraham, so others like Herodotus have incorrectly suggested that the Children of Israel introduced it into Egypt during their captivity around 1200 BCE. 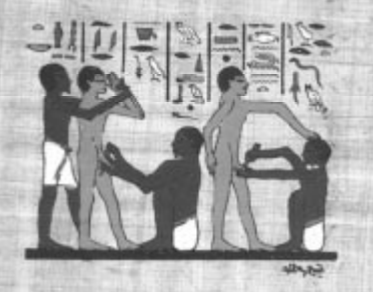 Evidence exists that ritual circumcision was being performed by the Egyptians as early as 2300 BCE, confirmation of this being a wall painting from Ankhmahor, Saqqarah, Egypt (dated in the eighth Dynasty, 2345–2182 BCE)

Now that we have established circumcision clearly predates Judaism, it is logical to search for the origin of this dualistic gender-based justification in customs that predate Judaism as well. Egyptian circumcision was used to demarcate a special elite class, very much like in the Abrahamic tradition, it is used to set apart the "chosen". Priests were the custodians of both secular and religious knowledge and they played a significant role in offering sacrifices to the Egyptian gods. Priests were expected to be pure morally and in physical appearance. The presence of the foreskin was regarded as a sign of female sexual organ and impurity and hence it was to be removed. As purity was a status of higher rank and a coveted attribute, the practice of circumcision, which originally was prescribed for the priests, ultimately became adapted by all men.

Priestesses in Ancient Egypt, on the other hand, were not circumcised and usually served in the temples of female deities. Those who served Isis were instructed to perform good deeds every day, such as anonymously donating to the poor. Detailed instructions for daily good deeds, rituals and sacrifices date back to the earliest dynasties.

Not the answer you're looking for? Browse other questions tagged biblical-basis old-testament justification gender or ask your own question.