Did St. Nicholas punch Arius at the Council of Nicaea?

Was Nikolaos of Myra (St. Nicholas) present at the Council of Nicaea and, if so, did he punch (or slap) Arius? This amusing factoid tends to crop up at this time of year and has a well-established place in Byzantine iconography, for example: 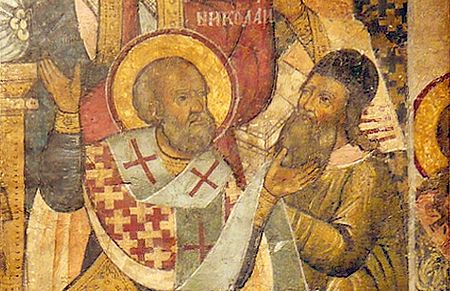 This blog post from 2015 and this article from 2016 dispute the historicity of this fact with fairly convincing arguments, including the fact that the first mentions of his presence are more than 500 years after Nicaea and the actual "punching" story is first recorded in the 14th century.

The Teubner critical edition of the various lists of Nicaea attendees, Patrum nicaenorum nomina latine, graece, coptice, syriace, arabice, armeniace, sociata opera seems to conclude that his name was only added to the list by influence of later biographies (such as of Symeon the Metaphrast), but that the earlier, more reliable manuscripts do not include him.

So, what is the evidence that St. Nicholas was at Nicaea and punched Arius?

There are some problems with the story, though.

In the first place, it’s not true. The story has no historical value.

As the old Catholic Encyclopedia notes, it’s doubtful St. Nicholas was even at Nicea, since the historical lists of bishops that attended that council don’t include him. Instead, Nicholas is linked to the Council by much later hagiographical works written over half a millennium after Nicholas died. Let’s Stop Celebrating St. Nicholas Punching Arius

Here is the excerpt of what the old Catholic Encyclopedia has to say about St Nicholas:

There is reason to doubt his presence at Nicaea, since his name is not mentioned in any of the old lists of bishops that attended this council. - Catholic Encyclopedia

But how did this legend come about:

According to Roger Pearse, editor of the Tertullian Project, the account of the violent incident at Nicea apparently shows up first over a thousand years after the Council, in a 14th-century work.

Even then, it isn’t Arius himself that Nicholas supposedly struck, but only “a certain Arian.” That story wasn’t good enough, though, so a couple of centuries later another writer changed it to Arius himself.

Note, too, that the medieval accounts have Nicholas slapping — not punching — the heretic. The story describes a medicinal slap or a rebuke, an attempt to “slap him back to his senses” rather than an expression of contempt or a wish to harm, as a punch certainly would be.

Be that as it may, in the original story the blow is not celebrated as a high point of the Council. On the contrary, for striking the Arian heretic, Nicholas was reportedly deprived of his mitre and pallium.

The later story, which changes the heretic to Arius, also ramps up Nicholas’s punishment, having him thrown into jail — and has him vindicated by no less than Our Lord and Our Lady, who appear to Nicholas in prison and, hearing that his has been imprisoned “for loving You,” free him of his fetters and clothe him in an archpriestly vestment, to the astonishment of those who come for him in the morning.

All said and pondered over there is no historical evidence that St Nicholas punched Arius.

In many places online we can find the statement that St Nicholas of Myra – the basis for Santa Claus – was present at the First Council of Nicaea in 325 AD, where he punched Arius in the mouth. So … is it true?

Unfortunately we have almost no historical information at all about any St Nicholas of Myra – our information is entirely based on Saint’s Lives of him, of which the earliest are 9th century, and the latest are modern compilations based on medieval collections. All these Lives are really closer to folk-tales than to history, and they reflect the accumulations of popular legends. Some of them do have Nicholas attending the Council of Nicaea; but they do not contain the story of Nicholas punching Arius. - Did St Nicholas of Myra / Santa Claus punch Arius at the Council of Nicaea?

The Saint Nicholas Center, his official website as it were, contains the story in detail. They did not give their references, and some of it sounds fantastical. It's entitled "Bishop Nicholas Loses His Cool."

In brief, Arius was arguing against consubstantiality, and Nick became agitated, slapping him across the face. He was immediately taken into custody, a miracle took place whilst he was jailed, and the Council went on to agree with his stance.

Not the answer you're looking for? Browse other questions tagged church-history hagiography st.-nicholas arius .

7
Why did the Council of Laodicea condemn "Judaizing" Sabbath rest?
4
Did the Second Council of Orange deny the "certain efficacy" of grace?
8
Why did St. Martin give half of his cloak, and didn't give the whole?
2
Was Jeanne d'Arc crazy: Did Catherine of Alexandria exist according to the Catholic church?
3
What answer did Arius and Eusebius have to Melchisedec being a representative likeness having ‘no beginning of days’ (Hebrews 7:3)?
0
What was the real issue between Arius and Bishop Alexander at Nicaea in 325?