When and for what reasons does the Pope have the right to legitimately excommunicate members of the Church?

Please explain me the teaching of the Church on the subject of validity of papal excommunications.

I’ve met one priest who holds that popes can only excommunicate members of the Church for real and grave reasons, and any excommunications for absurd, political, not genuine, or otherwise non-substantiative reasons is null and invalid, even if officially declared by the Pope.

Is such a statement correct? Are there any official documents on the subject?

Or is it true that the Pope can legitimately and effectively excommunicate any member of the Church for whatever reason?

Because, according to Wikipedia, Pope Julius II said:

I will not live in the same rooms as the Borgias lived. He [Alexander VI] desecrated the Holy Church as none before. He usurped the papal power by the devil's aid, and I forbid under the pain of excommunication anyone to speak or think of Borgia again. His name and memory must be forgotten. It must be crossed out of every document and memorial. His reign must be obliterated. All paintings made of the Borgias or for them must be covered over with black crepe. All the tombs of the Borgias must be opened and their bodies sent back to where they belong—to Spain.

One must be tried and judged guilty to incur a ferendæ sententiæ excommunication.

In that quote you give, where it says "I forbid under the pain of excommunication…," this refers to the conditions of a ferendæ sententiæ excommunication. One "incurs it only when the judge has summoned him before his tribunal, declared him guilty, and punished him according to the terms of the law." (source).

Some Background on Excommunications

For those Catholics in his jurisdiction, a bishop can

See also: "Who can excommunicate?"

However, a superior can annul the excommunication of an inferior, as then-Card. Ratzinger, prefect of the Congregation for the Doctrine of the Faith, did for Bp. Joseph Ferrario's excommunications of the so-called "[Hawaii Six][4]" in 1991. Here is Cardinal Ratzinger's letter: 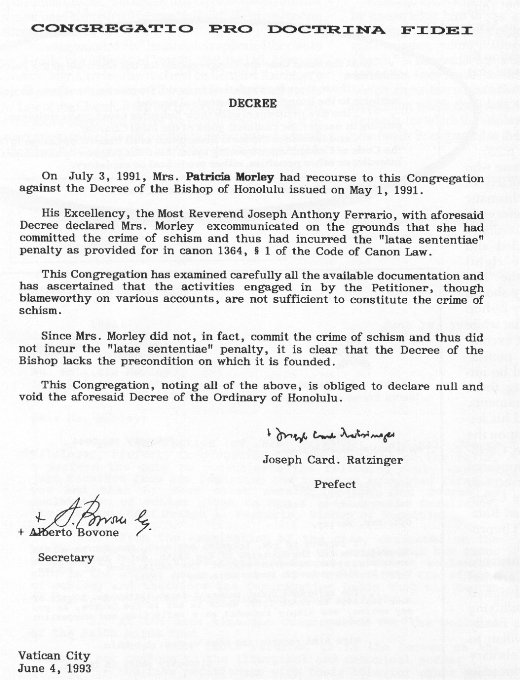 Now, a pope has no superior, save God alone. However, a subsequent pope can lift excommunications, as Benedict XVI did in 2009 for the Society of St. Pius X bishops whom John Paul II declared excommunicated in 1988.

When and for what reasons does the Pope have the right to legitimately excommunicate members of the Church?

882 The Pope, Bishop of Rome and Peter's successor, "is the perpetual and visible source and foundation of the unity both of the bishops and of the whole company of the faithful." "For the Roman Pontiff, by reason of his office as Vicar of Christ, and as pastor of the entire Church has full, supreme, and universal power over the whole Church, a power which he can always exercise unhindered."

The pope has to follow the the rules for excommunicating any Catholic faithful from communion of the Catholic Church as any other prelate of the Church!

In the Latin Church, Canon Law describes two forms of excommunication. The first is sententiae ferendae. This is where the person excommunicated is subject to a canonical process or trial, and if found guilty of misdemeanours meriting excommunication is duly sentenced. Once the sentence is published, that person is barred from active participation as a member of the Catholic Church. But this is a rare event.

The more common excommunication is that termed latae sentential, or what sometimes called often "automatic excommunication", where someone, in committing a certain act, incurs the penalty without any canonical process having to take place.[20] If the law or precept expressly establishes it, however, a penalty is latae sententiae, so that it is incurred ipso facto when the delict is committed.(Ca. 1314)

A person may be ferendae sententiae (i.e., upon judicial review) excommunicated if he

The 1983 Code of Canon Law attaches the penalty of (automatic excommunication) to the following actions:

Pope’s must follow the very rules that the pope’s have written down in the Code of Canon Law!

Not the answer you're looking for? Browse other questions tagged catholicism papacy canon-law excommunication .

12
Why did the Western and Eastern churches react to their respective states so differently?
6
According to Roman Catholicism, was the 1054 excommunication of the Patriarch of Constantinople valid, in light of Leo IX's death?
6
May the Pope waive the requirements of Canon Law in the appointment of bishops?
5
In the Catholic Church, can archbishops excommunicate people?
3
What is the origin of the cope?
6
How are conflicting views concerning latae sententiae excommunications resolved in the Catholic Church?
8
Does the Catholic Church have a contingency plan for the case that the pope and all cardinals are dead?
1
Should Catholics ignore Hebrews 13:3 if a Prisoner is excommunicated?
2
Are Catholics allowed to entertain that the Old Vulgate might contains errors?