Is falling to the floor during blessings or prayers supported in Roman Catholic doctrine?

I did not think things like this happened in the Roman Catholic Church—or maybe I did not understand what was going on.

Is falling to the floor during blessings or prayers supported in Roman Catholic doctrine (much like in the Pentecostal Church)?

Falling down could be a sign of possession, especially if it is a sort of fall that injures oneself.

In the New Testament, προσπίτνω is often translated as "to fall down," whether it be demons falling down before Christ (e.g., Mk 3:11) or a penitent sinner falling down in resignation to Christ (e.g., Mk 5:33). It could mean "to kneel," although "γόνυ ἐπουράνιος" (to bend the knee; cf. Phil. 2:10) means more properly "kneeling" or "genuflecting" (that latter word literally means "knee-bending").

St. Jerome translates προσπίτνω as procido, which carries the sense of prostration (lying face-down in adoration). This is used, for example, in the ordination rite for priests: 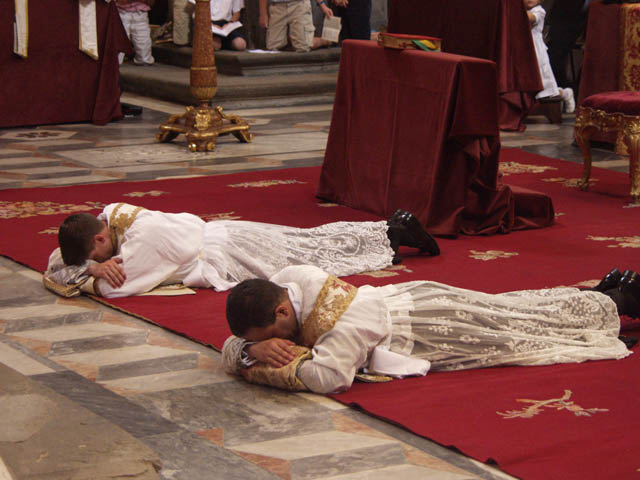 cf. also the nine ways of prayer of St. Dominic

Here are some scriptures that may be of interest.

13: and it was the duty of the trumpeters and singers to make themselves heard in unison in praise and thanksgiving to the LORD), and when the song was raised, with trumpets and cymbals and other musical instruments, in praise to the LORD, "For he is good, for his steadfast love endures for ever," the house, the house of the LORD, was filled with a cloud, 14: so that the priests could not stand to minister because of the cloud; for the glory of the LORD filled the house of God.

17: When I saw him, I fell at his feet as though dead. But he laid his right hand upon me, saying, "Fear not, I am the first and the last,

I never really believed in all this until it happened to me at a catholic charismatic program. It was a very calm setting, no noisy prayers, no hysteria All I can say is I felt over powered with the Lord's presence and my knees buckled when someone prayed over me

Not the answer you're looking for? Browse other questions tagged catholicism prayer blessings charismatic or ask your own question.