Did Churches plant a tree at their entrance in 13th century Christian Spain?

Nahmanides (in his commentary to Deut. 16:22) writes that the Christians in his time had a custom of planting a tree at the entrance of their Churches.

Is there any corroboration validating the claim of such a custom at all, especially in Nahmanides' time and place (13th century Christian Spain)?

Her is the original Hebrew:

Did Churches plant a tree at their entrance in 13th century Christian Spain?

The short answer would seems that it was quite possible, but it was never a universal practice or tradition in Spain or any other European country for that matter. It is not unheard of as a way of beautifying the grounds around a church, monastery or cathedral. It was definitely not a local custom, but it probably existed here and there, as the the desire of the local clergy and religious authorities wished.

This type of landscape design exists in here and there in modern days. Westminster Abbey (Mission, BC) in an example of such an existing custom. The Abbey Church was was consecrated in 1982 by Cardinal Basil Hume. 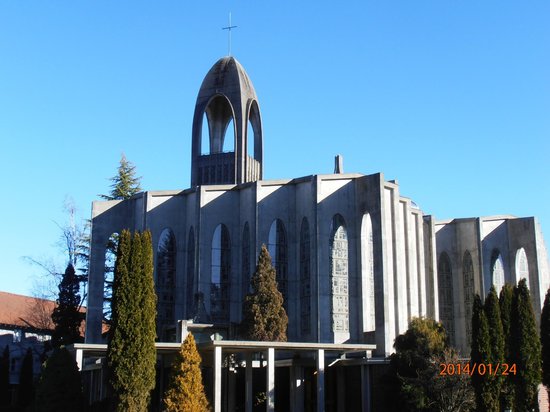 Moving a little closer to Spain, we can see St Edward's Church, Stow-on-the-Wold, England has trees in front of the church in such a way that even JR Tolkien would be in awe.

At least this church takes us to the 13th century.

This medieval sanctuary's tree-framed door looks like a portal to a mythical realm.

Bound by two ancient yew trees, this door looks more like a portal to a fairy realm than a church entrance. The arched wooden opening, capped by colorful stained glass windows, beckons visitors to unleash their imaginations and fantasize about the magical worlds that may be hiding on the other side.

Given the entry’s enchanting appearance, there’s little wonder why local lore says it inspired J.R.R. Tolkien’s Doors of Durin. Like this door, those elven entrances were flanked by two magnificent trees.

People speculate the writer came across the door during one of his many visits to the Cotswolds. But as exciting as the legendary connection is, there’s no proof that the link between the English church and Tolkien’s creations is true, making the theory just as fantastical as the author’s stories.

Even without a concrete Tolkien connection, St Edward’s Church is well worth visiting. The structure was built in the Middle Ages and is now a medley of fixtures from various centuries. Explore the building and you’ll find fragments dating from the 1000s through the 1600s, as well as pieces installed during Victorian-era restorations. Its tree-framed north door was constructed during the 13th century. 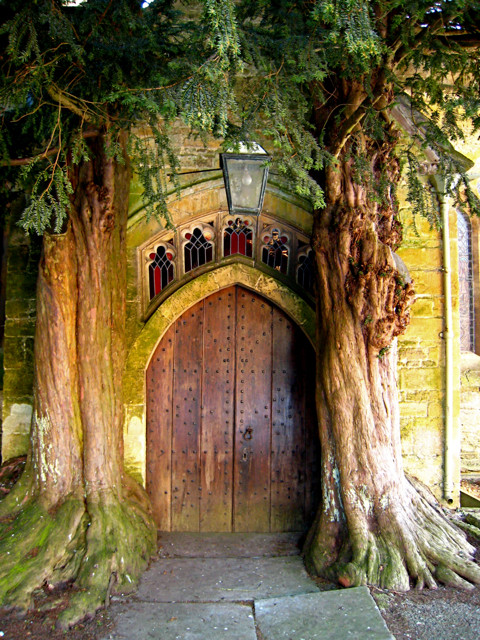 Now if other countries in the 13th century had trees in front of their churches, logic dictates that in the same time frame, there must have been some Catholic Churches in Spain with trees planted in front of their facades.

The yew (tree) is traditionally and regularly found in churchyards in England, Wales, Scotland, Ireland and Northern France (particularly Normandy). Some examples can be found in La Haye-de-Routot or La Lande-Patry. - Taxus baccata (Wikipedia)

To finish the question off, let us that a little walk down memory lane and look at the Cathedral of Seville with its orange tree courtyard!

Not just a pretty face, Seville’s orange trees are more than just a form of natural decor for the city centre.

From the intoxicating smell of the azahar, or orange blossoms, in springtime, to the practical use of the fruit in marmalade fit for a queen (literally!), the orange trees of Seville form a unique part of the city’s history.

This naranja amarga, or bitter orange, was later introduced to Europe by Genovese sailors, who brought it over from Asia. Rumored to bring happiness to whoever possessed it, the Moorish dynasty that reigned at the time decided to plant these bitter orange trees all over Spain, with a high concentration of them in Andalusia.

By the 12th century, everyone was a firm believer of the happiness-inducing qualities of the bitter orange. They began to plant them along the streets, and by the end of the century, even went so far as to construct the Patio de los Naranjos at the Cathedral of Seville. 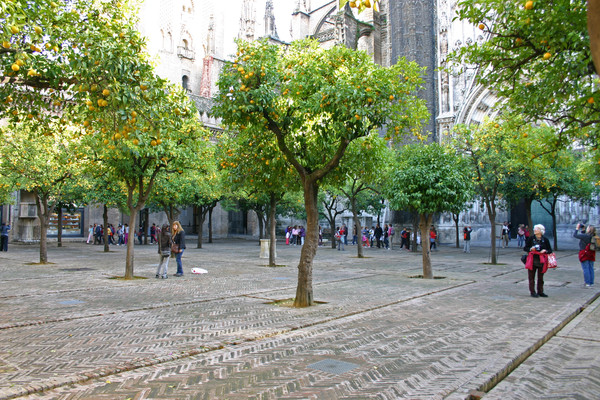 The serene orange tree courtyard offers a perfect spot to relax outside the cathedral.

Not the answer you're looking for? Browse other questions tagged church-history historic-customs or ask your own question.

6
Why did John Wycliffe oppose papal authority in the 14th century?
4
How have US Christian churches handled discrimination and segregation in the past?
10
Why did the Western and Eastern churches react to their respective states so differently?
7
What was the basis for saying that 11th-century Greek churches were “rebaptizing” Latins?
6
How did Oneness Pentecostalism spread and grow during the 20th century?
4
Does the text of the 13th Century Vita of St. Dymphna still exist today?
2
What did the original Christian writings look like during the 1st century CE?
8
Did 17th century Reformed Christians reject textual criticism?
6
What bible translation did the Unitarians use in 19th century America?