What were the specific changes to the canonization process introduced in 1983?

I understand that in 1983, the canonization process was changed via the document Divinus Perfectionis Magister. I see from Wikipedia that the role of Promoter of the Faith (a.k.a. Devil's Advocate) was reduced and the process was made "less adversarial".

However, I'm having a hard time understanding what specifically was changed (e.g. how was the Promoter of the Faith's role changed, what rules involving miracles changed, etc). Wikipedia has an article about the 1914 canonization process that was previously in effect, but it's not immediately clear what things are the same between the 1914 and 1983 process and what things have changed.

So what were the specific changes to the canonization process introduced in 1983?

Pope John Paul II changed this process dramatically. First, he put the responsibility for gathering evidence into the sole hands of the local bishop. More importantly, he abolished the entire legal system that had grown up around the canonization process and in its place made critical biographies his primary method for determining sainthood. The news shocked the Catholic hierarchy—lawyers lost their jobs and ecclesiastical historians gained new status. - John Paul II's "Canonization Cannon

More information on the various changes can be seen in this article: Canonization: Old vs. New Comparison

It is often noted by those skeptical of modern canonizations that the procedures by which the Church raises saints to her altars have been "changed" since the Second Vatican Council. What were these changes? Pope Paul VI began the process in 1969. His decree Sacra Ritua Congregatio split the Congregation of Rites into two congregations: the Congregation for Divine Worship and the Congregation for the Causes of Saints. The latter congregation was sub-divided into three offices, which led in turn to a restructuring of the canonization process. Between 1969 and 1983, the process in a sort of flux. In 1983, St. John Paul II's Divinis Perfectionis Magister further streamlined the procedure, eliminating much of the back-and-forth that characterized the pre-1969 procedure, as well as famously downgrading the office of Promotor Fidei ("Devil's Advocate") to make the office less adversarial.

But in what other ways do the pre-1969 and post-1983 procedures differ? How much has really changed in this process?

To help answer this question, we have prepared a side by side comparison of the pre-1969 procedure (which had remained relatively unchanged since 1588) with the post-1983 restructuring. Please note, because the years between 1969 and 1983 were a kind of interim period where the process was in flux, it is not included here, although a study of the changes in procedure during this period would be very illuminating. We present merely the pre-Paul IV system contrasted with the revisions made by John Paul II in 1983, revisions which characterize the current procedure followed in beatifications and canonizations. 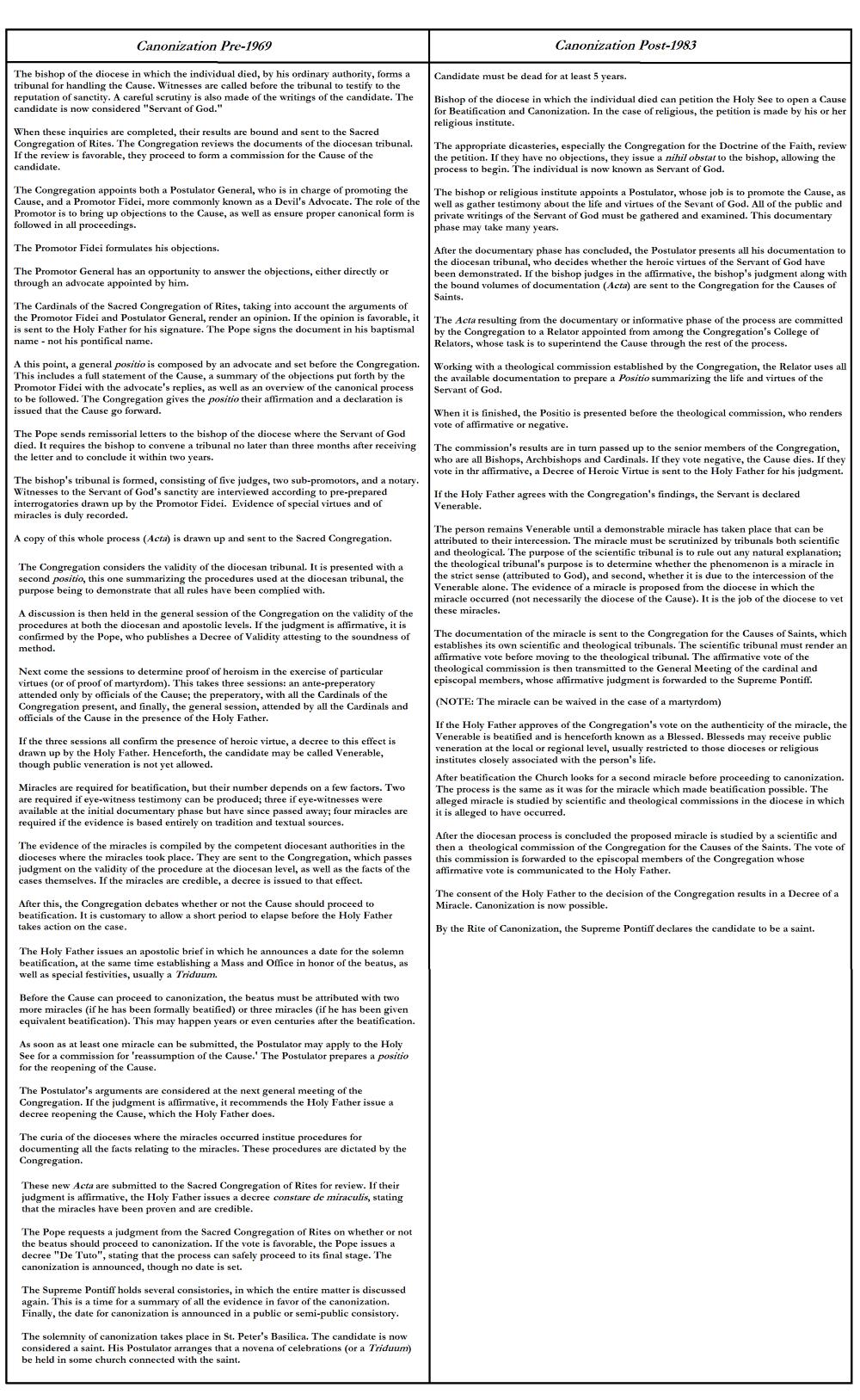 Essentially, while the modern canonization procedure maintains the nuts-n'-bolts of the pre-1969 system, the aspect of "checks and balances" that characterized the pre-1969 procedure is weakened. The rigid oversight is missing in the contemporary system. We will not review this entire argument, but recommend the reader consult our lengthy article "History of the Devil's Advocate" for more on how the character of canonization has changed.

The 1917 Code of Canon Law canons 1999ff. deal with beatification and canonization.

All the 1983 Code has regarding this is

Can. 1403 §1. Special pontifical law governs the causes of canonization of the servants of God.

Not the answer you're looking for? Browse other questions tagged catholicism canonization or ask your own question.

4
Why has “Devil's advocate” office been changed?
5
What is the process of removing an automatic excommunication?
4
By what process did the miraculous conception of Jesus occur?
0
What miracles were performed during the beatification and canonization processes of Mother Teresa?
7
Has there ever been a saint who has had their sainthood revoked due to falsification of their life details or the miracles leading to canonization?
4
What were the three miracles that St. Stephen performed to be canonized?
1
What exactly is the process of becoming a Jesuit?
4
What is the process of the Church approving a Marian apparition?