Was Herod Antipas an official king?

There are different Herods in the Bible. We have Herod the Great who ruled when Jesus was born and Herod Antipas, who ruled later.

I have seen in several places that Herod the Great is called "king" and Herod Antipas is called "tetrarch", apart from some texts written with simple language like Gospel of Mark where he is also called king.

My question is – was Herod Antipas a true, "full" king? Or does his title suggest that he was someone lower than king? Was he coronated? Is a tetrarch a king or something more like a prince or duke?

Herod Antipas was the son of Herod the Great and younger brother of Archelaus (both by Malthrace). Jesus was born during the reign of Herod the Great. Herod the Great's initial political career was as the the governor of Galilee, and later he was appointed as king over Judea by Caesar Octavius (Augustus). After he died, there was some conflict as to which of his sons were to become king of Judea (ultimately, none of them became king over all of Judea as he was). Herod made an amendment to his will just days before his death indicating that Archelaus should be king, but it didn't play out that way.1

Herod had written six wills during the course of his life. The sixth will was actually a codicil of his fifth will. Since this final version had been written only five days before his death, it had not been ratified by the emperor. Therefore, although Archelaus took over the leadership at Herod’s death he did not use the title king (Antiq. 17.8.4 §§202–3; War 2.1.1 §§2–3). After the Passover he and Antipas set out for Rome to dispute the last two wills, leaving Philip behind to govern. Archelaus wanted to convince Augustus that he should ratify the will made just before Herod died, because it represented his wish. On the other hand, Antipas sought to convince the emperor that Herod had not been of sound mind and body when he wrote the last will. While they were in Rome there was a revolt in Palestine, and a Jewish delegation arrived in Rome to ask autonomy for the nation and for union with the province of Syria. After much debate Augustus devised a compromise. He made Archelaus ethnarch (meaning “ruler of a nation”) over Idumaea, Judea, and Samaria. He made Antipas tetrarch (meaning “ruler of a quarter”) of Galilee and Perea and Philip tetrarch over Gaulanitis, Trachonitis, Batanea, and Paneas (Antiq. 17.11.4 §§317–20; War 2.6.3 §§93–100). Thus, Antipas, while losing his bid to be king, did prevent Archelaus from ruling the entire nation.2

So to clearly answer the question, Herod Antipas was "ruler of a quarter" (tetrarch) over Galilee and Perea. I've highlighted these regions in red/pink in the map below. 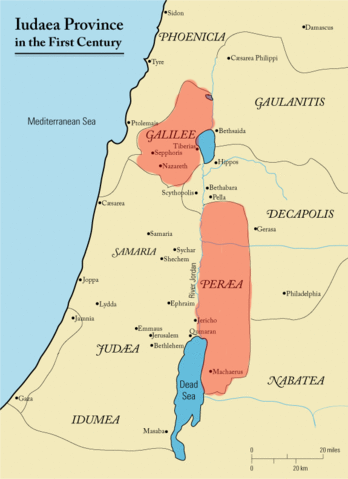 2 Ibid., 968. I linked all of the primary sources cited in the Encyclopedia to the English translations of the works available for free on the Christian Classics Ethereal Library so that you can read them for yourself.

3 Map from https://en.wikipedia.org/wiki/Perea#/media/File:First_century_Iudaea_province.gif (edited to highlight Galilee and Perea).

At the time before, during, and after Christ, the "kings" of Judea ruled at the pleasure of the Roman Emperor. The history I try to piece together below is found in Josephus' Antiquities of the Jews.

Herod the Great was the last king of all Jews, with the irony that he himself was not officially Jewish, having been born to an Arab mother (Wars of the Jews, 1.8.9). His son, Herod Antipas, at one point was designated to succeed him, but did not, as described below.

His entrails were also exulcerated, and the chief violence of his pain lay on his colon; an aqueous and transparent liquor also settled itself about his feet, and a like matter afflicted him at the bottom of his belly. Nay, farther, his privy member was putrified, and produced worms; and when he sat upright he had a difficulty of breathing, which was very loathsome, on account of the stench of his breath, and the quickness of its returns; he had also convulsions in all parts of his body, which increased his strength to an insufferable degree.

Not the answer you're looking for? Browse other questions tagged history israel herod or ask your own question.

8
What is the historical reason the King James Version was created?
23
Why was taking census a bad thing?
25
How could Jesus be born during the reign of Herod, and when Quirinius was governor of Syria, if those periods were not contemporary?
1
Where is there official writings from Perpetua or Felicity?
5
Where was Herod's temple built?
3
Is there any significance to the aside in Luke 23:12, regarding Pilate and Herod?
4
Why did Nehemiah need to tell us that the Queen was sitting beside the King?