Isaiah 25:6 "On this mountain, the Lord of Heavenly Forces"

Where does title "Lord of Heavenly Forces" come from?

The epithet "Lord of Heavenly Forces" translates yhwh ṣĕbāʾôt. The phrase consists of the name yhwh – the tetragrammaton – in construct with the plural noun ṣĕbāʾôt, traditionally "hosts" (e.g. BDB צבא, section 4c beginning at the top of the second column). According to one commentator:*

The noun [ṣĕbāʾôt] has probably an abstract meaning such as "plentifulness, numberlessness" and is intensified by plural form. Hence, it refers to numerous entities such as heavenly bodies and earthly armies.

As to where it came from, the first occurrence in our Bibles-as-bound probably also reflects the origin of the term: 1 Sam 1:3:

Now this man used to go up year by year from his city to worship and to sacrifice to the LORD of hosts at Shiloh....

The geographical origin of the term, then, is likely in the context of worship at Shiloh.† However, the term is utilized most frequently in the Bible by the literary prophets, generally without any direct reference to Shiloh. 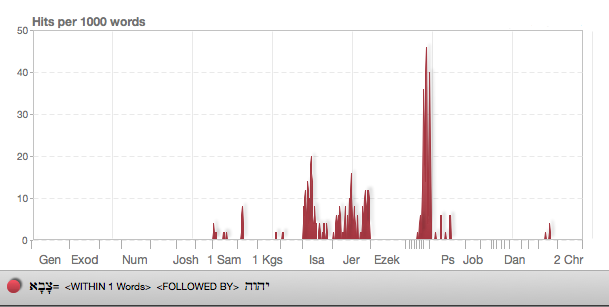 Although the OP only asks where it came from and not where it went later on, you may be interested to note another of my favorite uses:

Dost ask who that may be?
Christ Jesus, it is he;
LORD Sabaoth, his name,
From age to age the same,
And he must win the battle

† Even among those who hold that the Biblical origin of the term is the prophet Isaiah in the 8th C. (i.e. because a later date for 1 Sam is adopted), it appears to be mostly accepted that the connection to Shiloh is geographically correct. See Hans-Jürgen Zobel, “צְבָאוֹת,” TDOT, 12:230-232.

Not the answer you're looking for? Browse other questions tagged exegesis names-of-god isaiah .

14
Why does Jesus speak of himself in the third person?
2
According to Trinitarian belief how is Isaiah 48:16 interpreted?
3
What are the "heavenly realms"?
8
Joseph Smith Translation of verses in Isaiah 42 vs the Great Isaiah Scroll
2
How do seraphim in Isaiah 6 relate to the cherubim?
3
How do Christians who believe that the saints enter a blissful state as soon as they die explain David, Isaiah & Job's pessimistic outlook on death?
7
What is this ‘water’ in ‘wells of salvation’ that Isaiah speaks of here, and how is one to draw such water up?