When is the end of the Christmas season for Latin Rite Catholics?

When does Christmas really end for Catholics? I know it starts different for most Eastern Orthodox, but for Latin Rite Catholics, like myself, I don't know when it actually is supposed to end. At the very least I know it's over by Ash Wednesday, but there there seem to be very real reasons to celebrate from

So, I guess the real question is who has the stamina to party Catholic style for 40 days, especially after the hubbub leading up to Christmas, but in a liturgical sense, when does the Christmas season end?

The Christmas season immediately follows Advent. The traditional Twelve Days of Christmas begin with Christmas Eve on the evening of December 24 and continue until the feast of Epiphany. The actual Christmas season continues until the Feast of the Baptism of Christ, which in the present form of the Roman Rite is celebrated on the Sunday after 6 January.

The period following Christmas is called Ordinary Time or Time after Epiphany.

A picture is worth 1000 words. Cf. USCCB > Prayer And Worship > Liturgical Year > Christmas: 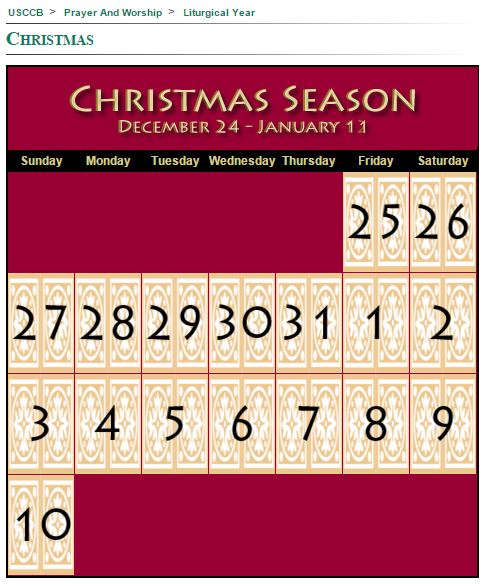 The liturgical season of Christmas begins with the vigil Masses on Christmas Eve and concludes on the Feast of the Baptism of the Lord.

The Christmas Season starts with Midnight Mass or the Christmas vigil (according to the new rite) and continues with a holy joy until the 2nd Vespers of the feast of the presentation of the Lord (February 2nd).The celebration of a 40 day season for Christmas goes so far back into antiquity that it is impossible to know at what point in time it became a tradition. The Feast of the Presentation was established as a feast on this date at least by the 6th century. Mary was obliged by Jewish law to present Our Lord to the Lord 40 days after his birth, thus bringing the joys of Christmas to a natural conclusion.

Until 1969, the ancient Feast of the Presentation of Our Lord, which is of Oriental origin, was known in the West as the feast of the Purification of Our Lady, and closed the Christmas season, forty days after the Lord's birth.- Directory on Popular Piety and the Liturgy (120) of the Vatican Website.

Traditionally speaking, our Christmas trees should go up on Christmas Eve and brought down on the Feast of the Epiphany with the arrival of the Magi with their gifts of gold ,frankincense and myrrh. On this day the three wise men are added to our manger scenes! In Europe, the Christmas Creches are only taken down on February 2nd.

Here is what Dom Gueranger has to say on this subject:

We apply the name of Christmas to the forty days which begin with the Nativity of our Lord, December 25, and end with the Purification of the Blessed Virgin, February 2. It is a period which forms a distinct portion of the Liturgical Year, as distinct, by its own special spirit, from every other, as are Advent, Lent, Easter, or Pentecost. One same Mystery is celebrated and kept in view during the whole forty days. Neither the Feasts of the Saints, which so abound during this Season; nor the time of Septuagesima, with its mournful Purple, which often begins before Christmastide is over, seem able to distract our Holy Mother the Church from the immense joy of which she received the good tidings from the Angels [St Luke ii 10] on that glorious Night for which the world had been longing four thousand years. The Faithful will remember that the Liturgy commemorates this long expectation by the four penitential weeks of Advent.

The custom of celebrating the Solemnity of our Saviour’s Nativity by a feast or commemoration of forty days’ duration is founded on the holy Gospel itself; for it tells us that the Blessed Virgin Mary, after spending forty days in the contemplation of the Divine Fruit of her glorious Maternity, went to the Temple, there to fulfil, in most perfect humility, the ceremonies which the Law demanded of the daughters of Israel, when they became mothers.

Besides, who has ever known of a joyous liturgical season (Christmas) being shorter than the season of preparation and joyful penance. Please recall that in some regions, Advent is six weeks long, not four like ours.

Unlike the Roman Rite, the Ambrosian Rite celebrates six Sundays of Advent (beginning with the Sunday after St. Martin’s Day) with proper epistle and gospel readings. These six Sundays were marked by seven Prefaces altogether: one for each of the first five, with two assigned to the Sixth Sunday of Advent. - Ambrosian Preface Texts for Celebrating Advent 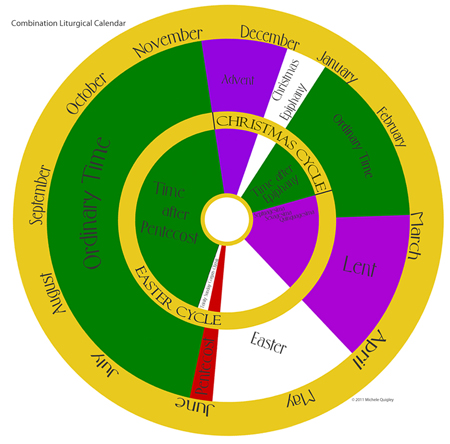 It seems inevitable every Christmas that there will be polite disagreement among Catholics as to when the Christmas season officially ends. Usually the discussion revolves around when to take down the Christmas decorations. Most of my friends will wait until after the Epiphany or after the Baptism of the Lord. But every year someone will say that that they are following the traditional and official end of the Christmas season, February 2nd, 40 days after Christmas, which is the Feast of the Presentation of the Lord or Purification of the Blessed Virgin Mary (commonly called Candlemas, in Greek Hypapante). Christmas to Candlemas: When is the Real End of the Christmas Season?

Often we will come across websites stating that the Christmas Season end on the Feast of the Baptism of the Lord. Liturgically speaking this is an err. This is simply the end of the Liturgical Time of Christmas. We can see in both the Ordinary Form of the Mass and Extraordinary Form of the Mass, that the Church dons green vestments the day following this magnificent feast. Nothing has changed here. 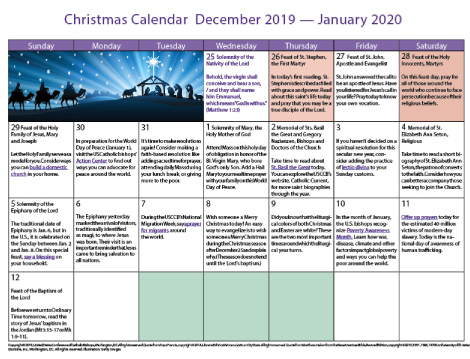 At Christmas we celebrate the Word become flesh, coming to dwell among us as the light of the human race, just after the darkest point of the solar year. Christmas, therefore, is a holy day second only to Easter in the Roman calendar. The Octave of Christmas (octave means eight; hence the octave of Christmas lasts for eight days) begins with Christmas day and ends after the Solemnity of Mary, Mother of God. The season of Christmas ends, and Ordinary Time begins, on the Monday after the Solemnity of the Baptism of the Lord, which signifies the purification of the world, through Christ Himself. - Liturgical Seasons

Tradition: decorating for Christmas begins on Christmas Eve... decorations are removed after Candlemas. (I am originally from Chicago & now in Phoenix... what I have seen these last several years & this sickens me... Christmas decorations are up even before advent begins & are taken down "...On the second day of Christmas My true love gave to me Two turtle doves and a partridge in a pear tree..." :)

Many Christians observe Candlemas but it is not a public holiday in countries such as Australia, Canada, the United Kingdom and the United States. - Candlemas

Not the answer you're looking for? Browse other questions tagged catholicism christmas calendar .

8
When is the Christmas Season?
10
Are the Sorrowful Mysteries recited when Christmas is on a Friday?
0
Is celebrating Christmas required of Catholics?
7
Which Episcopal Conferences set alternatives for abstinence on Fridays?
3
Do Mormons celebrate Christmas on/or around the 25th of December?
3
Married man becoming Latin Rite Catholic priest if giving up sex?
8
Is it possible for an Eastern Rite Catholic to change over to the Roman Rite and become ordained as Latin Rite priest?
3
What kinds of things are mutable in Latin Rite Catholic Liturgy?
5
Why does Christmas end on the Baptism of the Lord and not on the Presentation of the Lord?
1
Why aren't Christmas and New Year's Day the same date?