Are Catholics prohibited from getting their body tattooed?

I once heard a preacher stating that there are instructions in the Old Testament which prohibit the faithful from getting their body tattooed. I wish to know whether there are any teachings from the side of Catholic Church explicitly warning its members against tattooes .

Are Catholics prohibited from getting their body tattooed?

There is no official Catholic condemnation against getting tattoos. I know some priests who have tattoos! The whole idea of getting tattoos is to say the least very discouraged by the Church.

If the Church forbids us from mutilating our bodies, does this mean that getting a tattoo is against the teachings of the Catholic Church?

First of all, the Church has not made any kind of formal decision on the matter of tattoos. There is some Biblical evidence on this, for example, a passage in Leviticus that says:

"You shall not make any cuttings in your flesh on account of the dead or tattoo any marks upon you: I am the Lord" (Lev. 19:28).

Yet, it seems that this prohibition was present so as to avoid the people of Israel from following the pagan mourning practices of the Canannites. Moreover, these Old Testament ritualistic laws are not binding on Christians.

The Church does say that we should avoid practices that mutilate or damage our body, as you can see in no. 2296 of the Catechism.

The question of tattoos was on the mind of at least one pope. Pope Hadrian I forbade the usage of tattoos on one's body in 787 AD.

In 787 AD, Pope Hadrian banned tattooing. It still thrived in Britain until the Norman Invasion of 1066. The Normans disdained tattooing. It disappeared from Western culture from the 12th to the 16th centuries. - A Brief History of Tattoos

Nevertheless there were a few exception from this ban of tattoos by Pope Hadrian I.

Christian tattooing rarely enters the written record but when it does, it does so in interesting ways. Pope Hadrian I, in 787 AD, banned tattooing (since it was associated with heathen practices) but there was an exemption for religious tattoos since they would “bring spiritual rewards.”

In the Medieval period, mentions of tattoos become more numerous including clerics (such as Dominican priest and German mystic Heinrich Suso (1295-1366) who tattooed the name of Jesus over his heart). - Christian Tattooing

Why did British sailors get the Crucifixion scene tattoo on their backs.

European sailors were known to tattoo the crucifixion on their backs to prevent flogging (since it was a crime to deface an image of Christ). - A Brief History of Tattoos 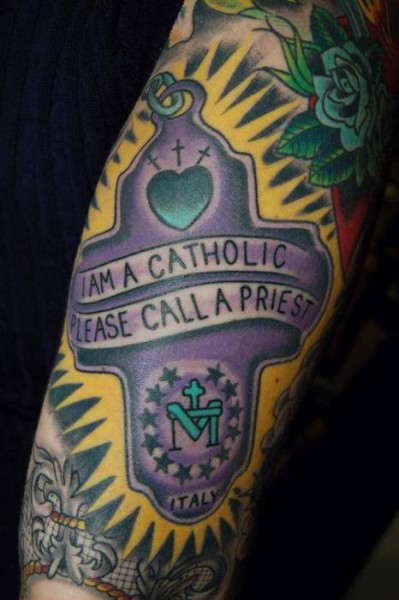 Here is a sample of a genuinely Catholic tattoo from Seven Types of Christian Tattoos.

I also know of some World War II marines (Catholics and non-Catholics alike) who got their dog tag numbers tattooed to their torsos or major portions of their limbs, for identification reasons in combat situations. 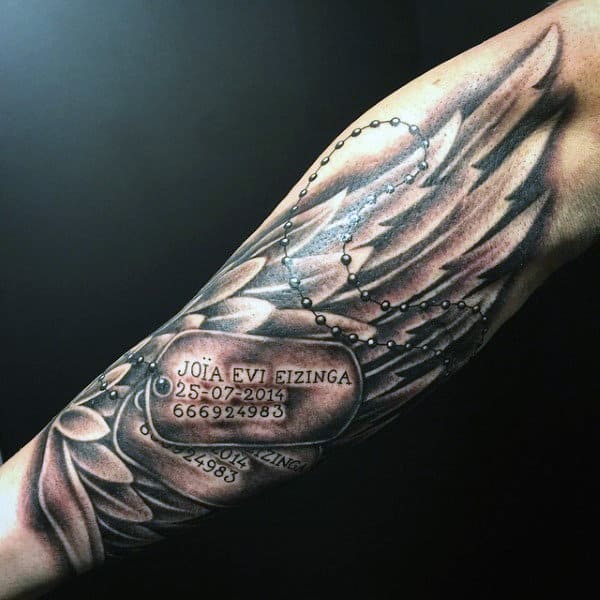 Why two dog tags are issued to soldiers?]9 The dog tag tattoo makes a third and permanent dog tag and often indicates the religious affiliations of soldiers.

Dog tag is an informal but common term for a specific type of identification tag worn by military personnel. The tags' primary use is for the identification of casualties; as such, they have information about the personnel written on them, and convey essential basic medical information such as their blood type and history of inoculations. They often indicate religious preference as well.

A pair of blank dog tags on a ball chain Dog tags are usually fabricated from a corrosion-resistant metal. They commonly contain two copies of the information, either in the form of a single tag that can be broken in half, or as two identical tags on the same chain. This purposeful duplication allows one tag, or half-tag, to be collected from a personnel's dead body for notification, while the duplicate remains with the corpse if the conditions of battle prevent it from being immediately recovered. The term arose and became popular because of the tags' resemblance to animal registration tags.

1
What is the Catholic teaching on tattoos?
1
According to the Catholic Church, can a tattoo be considered a sacramental?
0
What does the Bible say about body art/tattos?

1
What is the Catholic understanding of 'age' in Scripture and in its Tradition?
2
Was there any significance for the make of the tomb which was used to lay the body of Jesus?
5
Did David prophesy "God ruling the nations from a Tree"?
3
Did the metaphor of ' cup of suffering' as used by Jesus derive from OT?
2
What are the important gifts and graces given to Mary to become Mother of the Church?
1
According to Catholicism, how can a Christian be freed from the concupiscence of the flesh and thereby possess a sinless body?
2
Is it only Roman Catholicism that teaches the possibility of universal vulnerability of demon possession?
1
How did traditional Catholic teachings s determine the sides on which the Good Thief and the Bad Thief respectively hanged?**
3
Do catholic rules apply to former catholics?