Why do Christians have different books in their Bible?

Why is this? If there was an agreement on what books would be in the Bible in the early church, why are there so many differences between the books in various Bibles? Did some church leaders walk out and start there own churches with those books? Or is there some other reason?

Most of the books of the Bible were written by different people. An estimated 40 authors wrote the 70 or so books that various Christians accept as "the Bible". Most of these authors wrote independently from each other; if they were contemporaries, they typically did not confer with each other. If they were separated by time, the latter typically did not write with an apparent expectation that what he wrote would be considered scripture even though the former was during his time.

What you are referring to is the Bible Canon. A canon is

a regulation or dogma decreed by a church council.
Merriam Webster Dictionary

Basically, many Christians already followed many or even all of these books as scripture, then through councils called by early church leaders, a canon was set, decreeing them as scripture, indeed. These councils also set out to decree some theologies as Christian dogma and others as not Christian dogma. More rarely, some books were explicitly decreed not canon. These typically go by the names Apocrypha/Deuterocanonical books, Gnostic Gospels, or Pseudepigrapha. These books were accepted by fringe groups and rejected by the larger majority. This and among real issues (some teach dissonant doctrine) is why they were not included in the Biblical Canon. Most of them were just ignored or so fringe they were unheard of among the council members. 1

The following table helps compare all the major canons. See the footnotes for a comprehensive list of all the books. 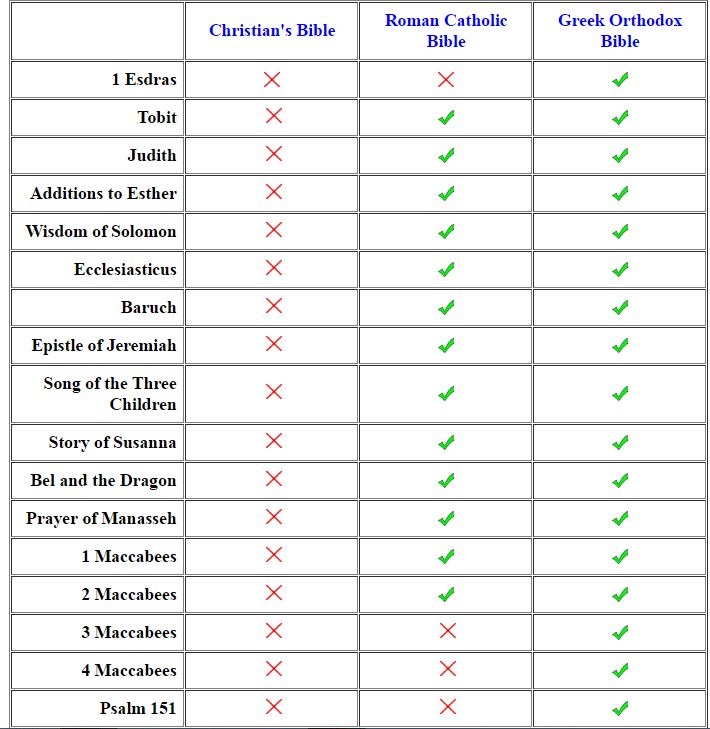 There are a few other canons in some much smaller segments of the Christian population, but those are typically very small in their number of adherents. For example, the Church of Ethiopia has a few more books in their canon than the Catholic canon. 2

The books accepted by any Christian group is called a canon. There are three major canons, one for the Catholics, one for the Eastern Orthodox, and one for the Protestants. The canon was decreed as "scripture" by early church councils, mostly based on the widespread use of these books. Over the centuries, there has been plenty of debate on the actual authenticity of these books, from both historical and theological perspectives. To many theologians and historians, the authenticity of any given book is a matter of independent study of those individual books, and opinions tend to vary widely among theologians, but tend to fall one way or the other among historians.

Not the answer you're looking for? Browse other questions tagged bible church-history canon .

-2
Do Catholics believe in the Old Testament?
43
How were the books of the New Testament chosen?
18
How long did it take to form the Biblical canon?
16
What writings are held as "biblical canon" by Swedenborgians?
10
When was the Biblical canon formalised?
11
How many 'Books' never made it to the Bible (Old and New Testament)?
8
When did the idea of a scriptural "canon" originate?
0
Resources to learn about Bible canonization

22
Why does communion frequency vary in different denominations?
11
How many 'Books' never made it to the Bible (Old and New Testament)?
5
Do any Protestant denominations organize a canon starting from a collection of books other than the Roman Catholic Church's canon?
5
How is it that Georgian Orthodox Church are in full communion with the Eastern Orthodox Church when they have a different biblical canon?
14
How did Christians cultivate their knowledge of the Bible before mass-printing of the Bible?
0
Why is there no archaeological evidence that Christians existed for 200 years after 70 AD?
7
According to Reformed Theology, why did the 70 Jewish translators include the Apocrypha?
9
Which canon did the Early Church recognize?
3
What is the history of the canon of the Bible in terms of 66 or 73 books (Catholic vs. Protestant)?
6
For Christians who are skeptical of the writings of the Apostolic & Ante-Nicene Fathers, what is their epistemological basis for trusting a canon?