According to the LDS Church (Mormons), how specifically did Joseph Smith translate the Book of Mormon?

First, here's the simple version: Buried together with the golden plates was a device known as the Urim and Thummim, described by Joseph Smith as:

two stones in silver bows—and these stones, fastened to a breastplate, constituted what is called the Urim and Thummim—deposited with the plates; and the possession and use of these stones were what constituted “seers” in ancient or former times; and ... God had prepared them for the purpose of translating the book.

Several revelations, including the translation of the plates, were received by the use of these stones, through a process that is not well-understood.

Answering the question well, however is a bit complicated. By the time most people became aware of the Book of Mormon, the work of translation was in the past; both the translation and the publication of the Book of Mormon were completed before the organization of the Church or the missionary work that brought the book to so many people. And Joseph Smith himself never had much to say on the subject; he considered the book to be the significant thing, not the process by which it was produced.

Joseph Smith would put the seer stone into a hat, and put his face in the hat, drawing it closely around his face to exclude the light; and in the darkness the spiritual light would shine. A piece of something resembling parchment would appear, and on that appeared the writing. One character at a time would appear, and under it was the interpretation in English. Brother Joseph would read off the English to Oliver Cowdery, who was his principal scribe, and when it was written down and repeated to Brother Joseph to see if it was correct, then it would disappear, and another character with the interpretation would appear. Thus the Book of Mormon was translated by the gift and power of God, and not by any power of man.

Again, this explanation may or may not be accurate, as David Whitmer was never present to witness the process. Joseph's wife, Emma, who did serve briefly as a scribe during the translation process, gave a slightly different description:

When my husband was translating the Book of Mormon, I wrote a part of it, as he dictated each sentence, word for word, and when he came to proper names he could not pronounce, or long words, he spelled them out, and while I was writing them, if I made any mistake in spelling, he would stop me and correct my spelling although it was impossible for him to see how I was writing them down at the time.

When he stopped for any purpose at any time he would, when he commenced again, begin where he left off without any hesitation, and one time while he was translating he stopped suddenly, pale as a sheet, and said, ‘Emma, did Jerusalem have walls around it?’ When I answered, ‘Yes,’ he replied, ‘Oh! [I didn’t know.] I was afraid I had been deceived.’ He had such a limited knowledge of history at that time that he did not even know that Jerusalem was surrounded by walls.

Many years later, in an interview, she gave some more detail on the process:

Joseph Smith could neither write nor dictate a coherent and well-worded letter, let alone dictate a book like the Book of Mormon [by his own effort]. ...

I am satisfied that no man could have dictated the writing of the manuscripts unless he was inspired; for, when acting as his scribe, your father would dictate to me hour after hour; and when returning after meals, or after interruptions, he could at once begin where he had left off, without either seeing the manuscript or having any portion of it read to him. This was a usual thing for him to do. It would have been improbable that a learned man could do this; and, for one so ignorant and unlearned as he was, it was simply impossible.

The only things that are clear from the historical record, (by looking at surviving newspaper articles, personal journals, and the like,) are that Joseph Smith was widely believed by his contemporaries--both friends and enemies--to be in possession of a set of golden plates in the late 1820s, that he claimed that these plates contained an ancient record, and that he had the means to translate it by means of the interpreters (Urim and Thummim) found with the plates.

At one point, Joseph Smith produced a transcription of several characters from the plates, plus a translation of the sample, which was shown to scholars by Martin Harris, Smith's scribe at the time. He was skeptical of the work and wanted evidence. The record is uncertain as to the details of what happened when he did so, with Harris claiming that he received a favorable response, and Professor Charles Anthon, the scholar he showed it to, denying the claim. As Gordon B. Hinckley noted,

Some years later when he was approached by an avowed detractor of Joseph Smith, Professor Anthon denied ever having commented with favor upon the characters or the translation. Yet the fact remains that Martin Harris was so impressed by the experience that he returned to Joseph Smith, and then immediately proceeded to Palmyra to put his affairs in order so that he might assist with the translation.

Unfortunately, while speculation abounds today, the actual concrete details of the process were never well-documented and have been lost to time, and all that remains are comments and recollections given years later.

Joseph Smith was surprisingly tight-lipped about the translation process. There isn't much we know about it.

When, later in life, he was asked about all of this, all he said is that he was able to translate this mysterious language by 'gift and power of God'. At this point, either he was unwilling to repeat the story about the seeing stones or he was changing his story to not include the seeing stones. When his brother, Hyrum Smith, asked him for more details, Joseph replied that "it was not expedient for him to tell more than had already been told about the coming forth of the Book of Mormon, and it was not well that any greater details be provided".

The Church of Jesus Christ of Latter-day Saints announced today the publication of more primary records and artifacts related to the translation of the Book of Mormon which, remarkably, sheds more valuable light on the translation process.

To quote the press release:

A new volume of “The Joseph Smith Papers Project” featuring the printer’s manuscript of the Book of Mormon was released Tuesday by the Church Historian’s Press, an imprint of the History Department of The Church of Jesus Christ of Latter-day Saints. “Revelations and Translations, Volume 3: Printer’s Manuscript of the Book of Mormon” is the 11th published volume of the project in the Church’s ongoing effort to make every document produced by Church founder Joseph Smith or by his scribes available to the public.

Publication of the volume represents a major milestone in a longstanding collaboration between historians from the Church History Department and the Community of Christ (formerly Reorganized Church of Jesus Christ of Latter Day Saints).

Both the introduction to the new volume and the magazine article discuss the instruments Joseph Smith used to translate, and both include never-before-seen photographs of a seer stone Joseph Smith likely used in the translation of the Book of Mormon.

So along with the complete printer's manuscript, the Church also published photos of one of the seer stones Joseph Smith used during the translation of the Book of Mormon. Not to be confused with the Urim and Thummim, this seer stone was not necessarily paired with another: 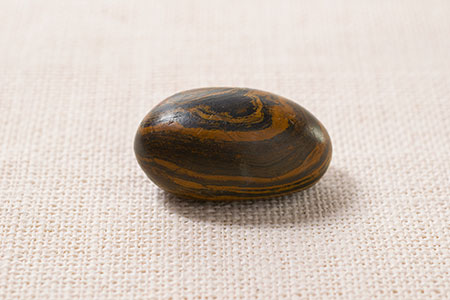 The translation process is still not very well understood, but the magazine article referenced above is already available online and contains a lengthy description of what we know about it, including the instruments of translation. That article (and The Joseph Smith Papers) are imperative reads for anyone seeking a rich understanding of the history.

There's an offical LDS page to answer your question here. I think that's your most solid and comprehensive answer. You can't get much more "according to LDS church" than their own web page dedicated to the topic.

It's broken into 4 sections: "By the Gift and Power of God", Translation Instruments, Mechanics of Translation, and Conclusion.

I think it's worth the read (about 2,000 words). It provides the church's standpoint about the how the Urim and Thummim was used, as well as what the Urim and Thummim referred to. It addresses Joseph Smith's loss of the ability to translate. It has links to related topics. It's pretty comprehensive and even includes some time period info about seer stones and their cultural and physical presence in early 1800s America.

There's hardly anything the Church of Jesus Christ is more eager about than that people read and study the Book of Mormon. You should have an easy time learning all you can about it from official church sources.

With the aid of two transparent stones fastened in the rims of a bow, called the Urim and Thummim, and allegedly with the aid of some additional stones called by some "seer stones". These were instruments prepared by the hand of God for the purpose of translating unknown languages, and their possession and use is what has constituted seers in ancient times as well as modern.

Most details outside of the fact that it was from gold plates that contained the acocunt, and that he normally dictated the words from the book while another acted as scribe, are left to the various recollections or attempts at recollection of those who were privileged enough to witness it.

I don't think that anyone in the church today (or anywhere in the world) knows the answer to this. If Joseph Smith or Oliver Cowdery were alive today, you might be able to ask them. I think we get into deep water very quickly when we wax speculative about what the process of translation "exactly" consisted of. This much I can tell you, that it was a correct translation of an ancient record, and that it required the power of God to be able to do it.

Not the answer you're looking for? Browse other questions tagged lds book-of-mormon translation joseph-smith .