How are the broken bones in the Shroud of Turin seen to be consistent with the bones of Jesus not being broken?

Many Christians believe that the Shroud of Turin is authentic. Recent research demonstrates how two nails pierced the right foot of Jesus, and the first nail actually went through his heel bone.

Additionally there are images of the right knee that show it to be severely swollen and indicate a fracture of the Patella bone.

According to those who believe that the Shroud is authentic, how do they see this as consistent with prophecy in John 19:36 that none of the bones can be broken to be a proper sacrifice?

Recent research demonstrates how two nails pierced the right foot of Jesus, and the first nail actually went through his heel bone.

A photograph of the shroud of Turin is below. A more legitimate source is: www.shroud.com

The short answer is: The majority of the professionals that had access to the shroud determined that there were no broken bones on the man whose image appears on it. They also determined that one nail was used on both the feet. If someone believes the shroud is the authentic burial cloth of Christ, this view, called the "classic" view, has no discrepancies. A more specific answer is below.

Both parts of your statement above (before and after the comma) have not been proven. Your first link ("Recent research") corresponds to a research paper that hypothesized two nails going through Christ's feet; experts disagreed (see below). It was also not agreed that any bones were broken (see below). This research was done by Paul C. Maloney, titled: “Joseph M. Gambescia, M.D. and the Position of the Feet on the Shroud of Turin. The History of an Investigation.” Incidentally, this research paper was not centered around whether or not any bones were broken; it was centered around how many nails went through Christ’s feet. He thinks there were two.

The first sentence from this research paper, from Mr. Maloney, states:

“I’d like to offer a disclaimer right at the beginning. I am not a medical doctor. I am a trained historian.”

HOW MANY NAILS WENT THROUGH CHRIST'S FEET?

This is an ancient Roman square nail; photo courtesy of Paul Maloney. 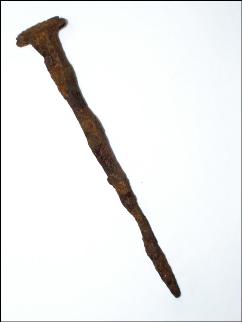 Mr. Maloney acknowledges disagreement as to the number of nails:

“Most medical observers have interpreted the data on the cloth as pointing either to two nails in the feet …or one nail.”

Mr. Maloney continues with his hypothesis:

“There were two nails on the right foot, and one wound in the left… [Dr. Gambascia] admitted that his colleague on the STURP team, Dr. Robert Bucklin, a forensic pathologist, did not agree with him… Here were two highly trained medical professionals with differing opinions. At least they did agree on one thing: the left foot was nailed across the right foot.”

In this research paper, Mr. Maloney says he thinks the man on the shroud's right foot was firmly set against something, making his right foot unable to move. He says that Dr. Gambescia and him believe that the man in the shroud's right foot was nailed first and that his left foot was placed over his right and nailed so that there were two nails going through his feet; one through his left and two through his right. They believe this from the blood patterns that show up on the shroud. I was unable to use the diagrams from the research paper. This picture approximately exemplifies the position of the feet referred to by Mr. Maloney.

”…the large blood stain at the ‘terminus’ of the frontal shin aligned perfectly with the heel!!! …Could this be right? I was filled with all kinds of doubts.” (Pg. 13) …In the latter view the ‘rosette’ pattern in the center of the right foot is plausibly set forth as proof that a nail penetrated the sole of the foot at that point.” (pg. 19) …When thus aligned, the large blood stain at the frontal right foot area located at the end of the frontal shin …was itself positioned automatically over the heel …of the right foot on the dorsal end, directly above the dark stain in that area. This fact suggested to me that Dr. Gambascia might be right -that there was probably a wound in the ankle/heel area. (pg. 38) … If one nail were used for the feet, as is commonly accepted in this “classic” discussion of the imprints of the feet on the Shroud, and the left foot has moved up and down creating the pattern we now see for the left foot, what would prevent the right foot from also swiveling on that single nail? Gambesca’s view -two nails in the right foot- offers the best explanation. With two nail wounds the right foot could not move at all.” (Pg. 44) …there is an important comparative distinction between the imprint of the right foot and that of the left. The question here is: Why is the right foot preserved as a “full” imprint whereas the left only preserves the rivulets -but no convincing “full” imprint of the foot itself?” (pg. 74)

This is a photograph of the blood from the feet of the man in the shroud. 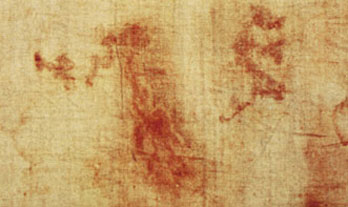 According to Mr. Maloney, there was no blood found on the center of the left foot of the man on the shroud. He thinks it doesn’t show up on the shroud because he thinks that’s where the nail was. He thinks the blood flowed off and around his left foot, not leaving a mark. He states:

“…it is important to realize that the center mark of the top left foot is hypothesized; it does not show up anywhere on the Shroud -either dorsal or frontal.”

In this same research paper, Mr. Maloney stems away from the shroud to what he actually thinks happened when Christ was crucified. He calls this: “The Crucifixion Simulation.”

THE CRUCIFIXION SIMULATION (From: Mr. Maloney)

DID A NAIL GO THROUGH CHRIST'S HEEL BONE?

This is a dorsal view of the shroud showing the legs and back of the feet. 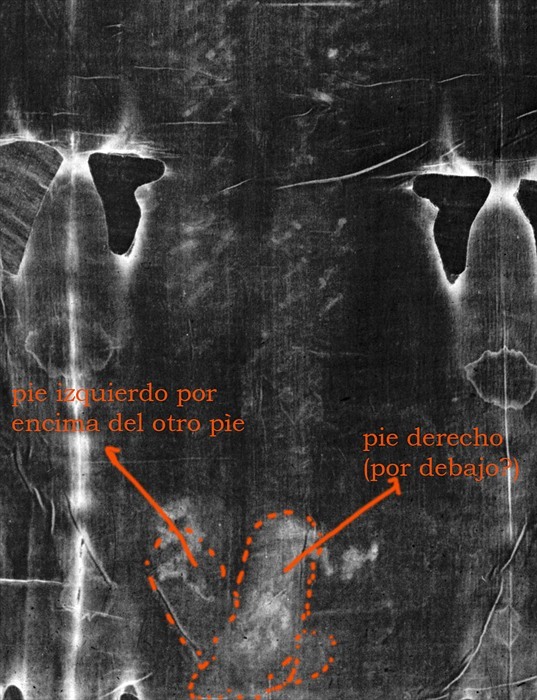 According to Mr. Maloney:

”When thus aligned, the large blood stain at the frontal right foot area located at the end of the frontal shin… was itself positioned automatically over the heel… of the right foot on the dorsal end, directly above the dark stain in that area. This fact suggested to me that Dr. Gambescia might be right -that there was probably a wound in the ankle/heel area.”

OTHER SOURCES -WAS THE HEEL OR KNEE BONE BROKEN?

”The Man of the Shroud has his feet bent forward and this is very important for the measurement…the position of the heel changes considerably if measured with a “hammer” or outstretched foot.”

”According to Dr. Petrus Soons and other medical experts such as radiologists and doctors I have personally spoken to who have come to our museum from the local hospital, there are absolutely no broken bones on the body, contrary to some who claim so.”

ARE THERE IMAGES OF THE RIGHT KNEE THAT INDICATE A FRACTURE?

The link you’ve provided of “there are images of the right knee” states:

”No signs of broken legs are visible, neither from a frontal nor a dorsal view. The right knee seems to have a swelling above the knee cap as can be seen in the discussion.”

”Most probably the swelling above the right knee cap is due to internal knee injuries having caused bleeding into the knee capsule, hemarthrosis… If such a swelling comes up after a bump of the knee cap against a hard surface, an xray photo often reveals a knee cap fracture. Therefore the TSM has most likely got a knee cap fracture probably by knocking his right knee against a hard surface.”

The first sentence in the next paragraph is interesting:

”It appears that the feet have been nailed by a single nail.”

From a religious perspective, your question only relates to people that believe the shroud of Turin is the authentic burial cloth of Christ. Those people are left to make their own opinions as to which expert carries more weight and as to how they interpret the scriptures. Some would only consider the NT passage and some would consider all three (below). I am not aware of any particular church that states their opinion on the matter. For those of us with absolute faith that Christ is The Messiah, none of this matters because our correct and incorrect interpretations of science and religion don’t affect his messiahship.

”…he protects all his bones; not one of them will be broken.”

” The Jews therefore, because it was the preparation, that the bodies should not remain upon the cross on the sabbath day, (for that sabbath day was an high day,) besought Pilate that their legs might be broken, and that they might be taken away. Then came the soldiers, and brake the legs of the first, and of the other which was crucified with him. But when they came to Jesus, and saw that he was dead already, they brake not his legs: But one of the soldiers with a spear pierced his side, and forthwith came there out blood and water.” 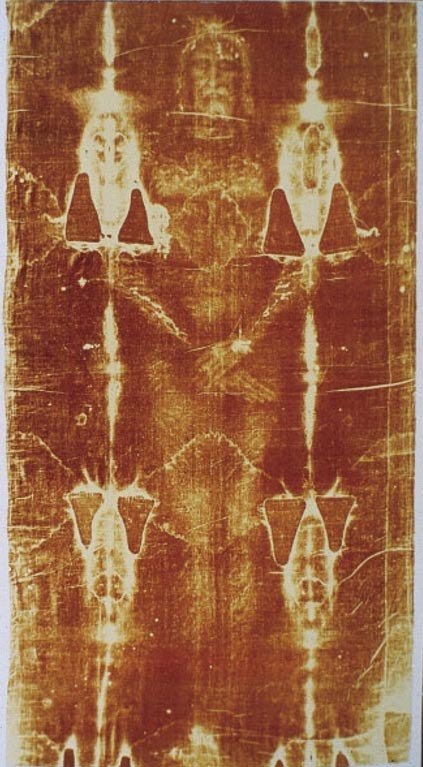 Several decades ago an ossuary was found and in it was a crucified male. I believe they showed a gnarly nail through his heel. It makes sense to hold the body up.

The importance of this discovery was HE HAD THE 'PIERCED ANKLE", Just as the Genesis prophecy says , speaking of the Serpent in Gen 3:15, " He will crush your head, and you will STRIKE HIS HEEL." God does not demand we believe with no evidence. But on the other hand, often there is enough evidence and often the smallest particulars are so amazing, to say "I do not believe' becomes "I WILL NOT BELIEVE" . One example is the prophecy, "He that is hanged on a tree is accursed by God" Given centuries before the Romans had even used "trees to kill " ie Cruicifixion.

16
What was the specific trap being set for Jesus by the Pharisees in John 8?
4
Does Isaiah foretell any births that are not about Jesus?
1
How verses from OT are selected for Jesus
2
What are the names of two thieves who were crucified along with Jesus?
8
John 1:18 - "No one has ever seen God" - How do Trinitarians reconcile this scripture with the belief that the Lord Jesus Christ is God?
4
Why was Jesus not welcomed and carefully tested by the Jews if they were (and are) actually waiting for Messiah?