How to reconcile Kierkegaard's model of worship with Existential authenticity? 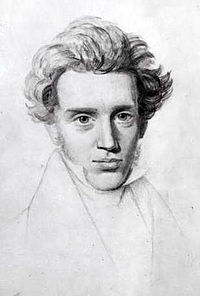 I've been told Kierkegaard suggested that worship be a form of theater where the congregants are actors and pastors are directors. (This is the only on-line reference I could find, does anyone have a link to a more authoritative source for this?)

Can someone please explain how it would be possible to worship authentically if a worshiper is merely acting?

Kirk, I just came across this question from way back in December. Actually, one of the primary points that Kierkegaard was making is that what happens in worship is done for the sake of God (who is the audience). It is a corrective to the idea that worship is entertainment for the congregation or that the pastor/priest is the primary performer. The primary action of worship is the praise and prayer of the congregation offered to God; the role of the pastor/priest is to support the work of the congregation. The word "liturgy" is actually in its derivation "the work of the people."

You are misunderstanding the point being made in the article linked to. The 'drama' description is being used as an analogy to what people are doing in the worship service, not to whether they are 'pretending'. In other words some people are 'directors' (telling others what to do) some are 'actors' (doing stuff) and some are 'audience' (watching stuff being done). When they talk about people being 'actors' they don't mean they have to pretend - it means they have to do stuff rather than just watch (that's the original meaning of the word actor - one who takes action).

The point being made on the web page, and presumably by Kierkegaard (though there isn't any reference to back it up), is that there are churches where the congregation are mere audience - watching what is happening without taking any part. He believes this is wrong, and that the congregation should take an active part in the worship. It doesn't mean they have to 'pretend'.

Not the answer you're looking for? Browse other questions tagged worship or ask your own question.

7
Reading the scripture in common worship
3
Is it more important that a worship service be contemplative or instructive, and how do we know?
5
Where did the custom of dancing with flags during worship originate?
8
According to LDS teaching, why should we worship this God?
0
Praise and Worship, what is the difference?