Is there any evidence in the Roman catacombs that the Early Church had a devotion to the Virgin Mary?

Is there any archeological evidence in the catacombs of Rome that the Early Church had any (particular) devotion to the Virgin Mary? If so, what are the sources that support such a devotion?

Not prior to the 2nd century, mainly since the catacombs were not developed until then.

While there are various Christian frescos in these underground tombs which demonstrate a devotion to the saints, including the Virgin Mary, the time period for their origin would be no earlier than the late 2nd century or early 3rd, for even though Christians immediately began burying their dead in the catacombs after they became available, they did not become regularly used for worship until persecution forced them underground. The frescos did not come till later, and those that are dated are probably from the late 3rd or early 4th century. By 380 A.D., the catacombs were no longer used for meeting as Christianity became legal in that year.

So even the earliest frescos would reflect practices removed by at least a century from Christ. Yet, with other historical records it is clear that devotion to the saints, including Mary, was obviously early and seems to have developed parallel with the use of the catacombs to bury the early martyrs.

Whatever the case, since the catacombs yield little empirically of the Church prior to the 2nd century and since devotion to saints seems to be of the era of the catacombs' first use by Christians, nothing found in these tombs can guarantee a connection with the Church in its most primitive and primary state.

There seems to be little archeological evidence of any devotion of the Virgin Mary in the Early Church catacombs. But at the same token there may be glimmers of a Marian devotion amongst the faithful of the first few centuries after the Crucifixion of Our Lord Jesus Christ.

There are many Christian images concealed within the Catacombs of Priscilla, in Rome. One of these images is the first known image of the Virgin Mary, painted around the time of Christian persecution in 170 BC. The image of Mary nursing Jesus painted as a fresco high upon the walls of the catacomb was meant to refresh the persecuted Christian’s spirits and give them hope as Mary’s gentle gaze encourages them. Upon examining the fresco we begin to observe the intricate symbolic details that are included. For example, the clothing worn by the women within the painting reveals to us that the woman is in fact Mary the mother of Jesus. She is shown wearing a woolen garment which was most commonly worn by Roman matrons and is also wearing a short veil that was worn by dedicated virgins. We then recognize the baby on her lap as Jesus, who is glancing over his shoulder to observe another figure painted to the left. This figure is a man who is pointing up to the star of Bethlehem, he is dressed in a cloak that signifies him as a philosopher of distinction, but there is debate on who this figure was specifically. Some claim that it is depicting the prophet Isaiah who predicted that “The Lord Himself shall give you a sign. Behold a Virgin shall conceive and bear a son, and his name shall be called Emmanuel”, but others claim that the man is representing the prophet Balaam who said “a star shall come forth out of Jacob, and a scepter shall rise out of Israel”. Reaching out over the prophet and Mary is a blossoming tree branch that refers to the Old Testament prophecy “The Rock of Jesse has blossomed; the Virgin has brought forth Love and Man”. - First Known Image of Mary, In Catacombs of Priscilla 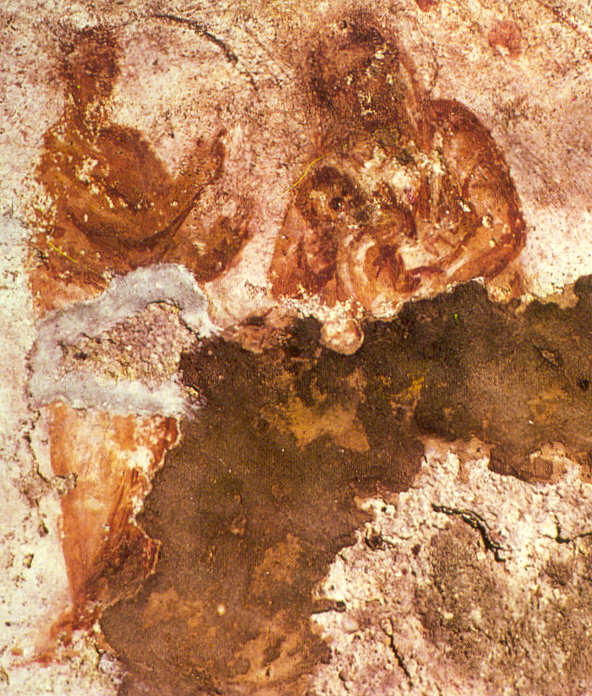 This is the oldest known image of the Virgin Mary (seen apparently nursing the infant Jesus on her lap). It is located in the Catacomb of Priscilla on the Via Salaria in Rome. It is dated circa A.D. 150. - Foundations of Marian Devotion in the Early Church

Wikipedia has this to say about the subject:

Early veneration of Mary is documented in the Catacombs of Rome. In the catacombs paintings show the Blessed Virgin with her son. More unusual and indicating the burial ground of Saint Peter, was the fact that excavations in the crypt of Saint Peter discovered a very early fresco of Mary together with Saint Peter. The Roman Priscilla catacombs contain the known oldest Marian paintings, dating from the middle of the second century. In one, Mary is shown with the infant Jesus on her lap. The Priscilla catacomb also includes the oldest known fresco of the Annunciation, dating to the 4th century. - Marian art in the Catholic Church

Not the answer you're looking for? Browse other questions tagged catholicism church-history virgin-mary archaeology devotion .

8
How widespread was Marian devotion during the first two centuries of Christianity?
2
According to Catholicism, what is the difference between veneration and devotion?

8
How do we know Mary was a virgin at the time of Jesus' conception?
25
What is the Biblical evidence against the perpetual virginity of Mary?
7
What is the biblical and traditional support for the Catholic Marian devotion?
10
Do the Roman catacombs confirm the early Church believed in the doctrine of the communion of saints?
5
Are Catholics permitted to honour Mary as a priest?
8
What evidence exists to support church traditions regarding the deaths of the following apostles?
0
What is the basis of St. Pius X in 1906 that led to the approval of the prayer devotion: "Mary Virgin Priest, pray for us"?
8
How widespread was Marian devotion during the first two centuries of Christianity?