What is the source of this numbering anomaly in Ambrose's De Officiis?

In at least two editions of Ambrose's De Officiis (On the Duties of the Clergy) there is a numbering anomaly in Book 1, Chapter 38, where paragraph numbers 190-199 are skipped, and paragraph number 200 is used twice. This can be seen in CCEL's online edition. It is also present in a paper edition which uses the same translation.

What is the source of this numbering anomaly? Do other translations or editions have it, or is it particular to the Schaff/De Romestin translation? Or is it limited to the CCEL edition? (The Benediction Classics printed edition I saw made no mention of the CCEL, but I guess it's possible they simply copied and published the text of the CCEL edition. Seeing as it's out of copyright I'm not sure if that would be illegal or not...)

CCEL's text comes straight from the 1896 publication of Nicene and Post-Nicene Fathers, Series 2, Volume 10. In fact, they host an image of the page that was transcribed, and the same page is also on Google Books.

You'll notice that there's no explanation given in the text. Neither is any given in the introduction. So let's turn now to a modern translation of this work.

An edition edited by Ivor J. Davidson and published in 2001 includes paragraphs numbered 190–199, but a close examination of them indicates that they have the same content as the paragraphs in the Schaff version: the numbers of Schaff are simply offset. Due to limited availability of the work on Google Books, this may be difficult for some to confirm, but the relevant section begins on page 228. A few screenshots will suffice for those unable to read these pages. 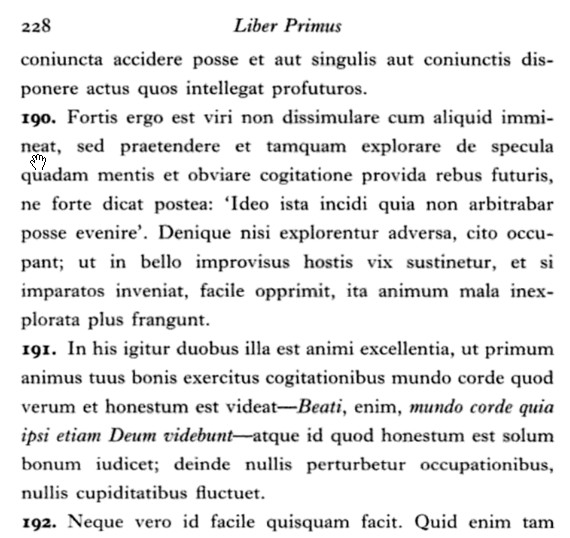 Note the similarity, for example, in the beginning of §191 above, and the second §200 in Schaff:

In his igitur duobus illa est animi excellentia
In these two points, then, consists the excellency of the soul

From this point forward, the number systems diverge by nine: Schaff's §201 corresponds with Davidson's §192. We see this in Davidson's §197: 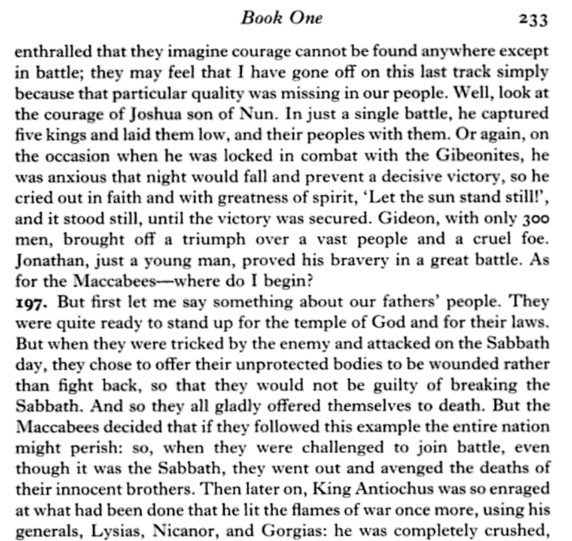 It corresponds very closely to Schaff's §206:

First, I will speak of the people of our fathers. They were ready to fight for the temple of God and for their rights, and when attacked on the Sabbath day by the craft of the enemy, willingly allowed wounds to be inflicted on their unprotected bodies, rather than to join in the fight, so that they might not defile the Sabbath.

Based on this analysis, it seems pretty clear that the issue in Schaff's text, and by extension, CCEL's, is merely a typographical numbering mistake, not a matter of missing content. Strictly speaking, then, the paragraph numbering of Schaff's edition here is not accurate and should be treated accordingly. However it's worth noting that its handling of chapters matches that of Davidson's edition.

Not the answer you're looking for? Browse other questions tagged ambrose .

4
What is to be understood by Mary being the "mother of the church"?
4
Renouncing the devil during baptism
3
How can I find this letter from Ambrose?