What is the Biblical basis for considering Satan the author of evil?

Satan in Job seems to be characterized as a servant of the Lord and in Isaiah Lucifer is mentioned as a destroyer of cities. It's never really clear why evil exists. In a couple places in the Old Testament it is mentioned that God is all good. So what's the Biblical basis for believing that evil comes from the devil?

While the Old Testament introduces Satan and portrays him as:

It doesn't go into anywhere near the level of detail that the New Testament provides regarding this particular being. One of the things we can see in Matthew's account of the Temptation of Christ in the Wilderness is that Satan is alternatively identified as "the devil" and described as "the tempter". This identification is also made explicit in the following verses in Revelation:

The great dragon was hurled down—that ancient serpent called the devil, or Satan, who leads the whole world astray. He was hurled to the earth, and his angels with him. - Revelation 12:9 NIV

He seized the dragon, that ancient serpent, who is the devil, or Satan, and bound him for a thousand years. - Revelation 20:2 NIV

"That ancient serpent" is an allusion to the serpent in the Garden of Eden - the original tempter.

Elsewhere, we see references to "the evil one","the god of this age" and "...the ruler of the kingdom of the air, the spirit who is now at work in those who are disobedient." (Ephesians 2:2) which from context all refer to the same being. Given that basis, an additional key passage that is relevant to answering your question is John 8:44 -

You belong to your father, the devil, and you want to carry out your father’s desires. He was a murderer from the beginning, not holding to the truth, for there is no truth in him. When he lies, he speaks his native language, for he is a liar and the father of lies.

So in summary, the Bible - and more specifically the New Testament - asserts that Satan is "the father of lies", "is now at work in those who are disobedient" and "leads the whole world astray" and by nature "was a murderer from the beginning"; Given this basis, a designation of "author of evil" does seem appropriate for Satan.

Unfortunately your additional questions regarding where and why evil exists go beyond the scope of what can adequately be addressed on this site without resorting to primarily-opinion-based answers.

There is no mention in the book of Job that Satan is a servant of the LORD. What it says is:

Now there was a day when the sons of God came to present themselves before the LORD, and Satan came also among them.
-- Job 1:6 (KJV)

The narrator of the story sets the scene with the sons of God gathering in the presence of the LORD, and Satan decides to turn up, too. Why is it assumed that Satan is one of the sons of God? The sons of God are those who delight in being in His presence -- those who sang for joy at the work of His creation (Job 38:7).

In Job 1:10, Satan mentions the "hedge" the LORD has put about Job. Why? Surely, it is obvious to any discerning reader that the hedge is a source of irritation for Satan.

In Job 1:11, Satan declares the outcome he is hoping for if God allows him access through the hedge -- that Job would curse Him to His face. Now, what son who delights in the presence of the LORD and shouts for joy at the work of His creation, would even contemplate such a thing?

The story of Job is about how Job's airs in regard to his righteousness began to spawn trouble within the hedge, and rather than let the scenario play itself out, God intervenes to wake der letzte Mensch from his self-righteous stupor and show him that there is more to righteousness than simply being a diligent practitioner of religion.

The lesson that Job learned is pertinent to anyone who thinks he has finally arrived:

I shall die in my nest,
And multiply my days as the sand.
My root is spread out to the waters,
And the dew lies all night on my branch.
My glory is fresh within me,
And my bow is renewed in my hand.
-- Job 29:18-20

Such an attitude blinds a person to the reason for their prosperity and the ongoing plight of the poor who are struggling to deal with the demands of life.

Satan was not the author of evil. Evil arose as the bi-product of the freedom God gave His created beings to do as they please -- the same freedom He, himself, possesses.

The passage in the Genesis narrative concerning the Tree of the Knowledge of Good and Evil is a perfect example of how evil arises, when what pleases one being conflicts with what pleases others.

When God set the rule concerning the forbidden fruit, he was simply informing Adam and Eve what would please Him in regard to their conduct in Eden, and why. In generic terms, rules/laws/commandments are nothing more than statements of what would please the sovereign concerning behaviour in his/her/their domain (home, school, workplace, community, state, nation, world, United Federation of Planets, Universe). 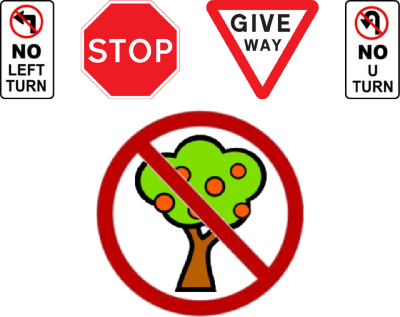 By giving a particular law to Adam and Eve, God made it known to them that their life in Eden would persist only as long as it pleased them to please Him in regard to the Tree. Rather than singing for joy at this, it pleased Satan to convince Adam and Eve that pleasing themselves would be of greater profit to them than pleasing God.

In any sovereign domain, assuming a just sovereign who provides for the needs of his/her/their citizens, the following graphic illustrates the different paths to good and to evil. 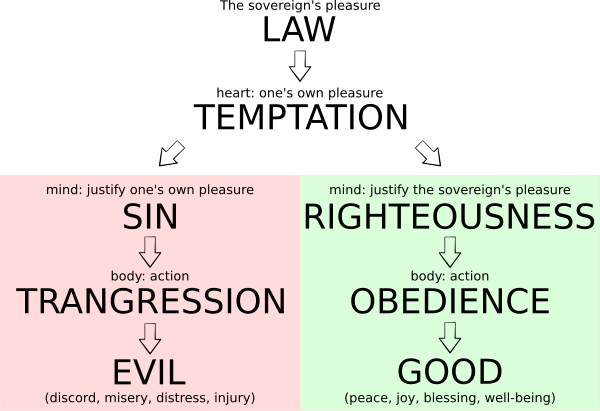 Not the answer you're looking for? Browse other questions tagged biblical-basis satan good-and-evil .

6
What was the explanation for why Catharism identified the Old Testament God as Satan?
5
What prophets came from Galilee?
0
According to Catholicism, who is the leader of devils?
3
What is the Biblical Basis for Christians keeping the Sabbath?
3
Are there biblical examples that justify fantasy-scare?
3
What is the biblical basis for the claim that Malachi 3:6-12's curse and blessings concerning tithing apply to the New Testament Church?