Why is so hard to find a print version of ASV bible?

I started to study the bible recently, and I wanted to buy a print copy of the American Standard Version. The bible is available online but I wanted a print version as a backup. To my surprise the bible is out of print. I looked online for print copies and only found one or two sellers. Why is this bible not widely available in print form? Is it because of the expired copyright? The KJV is in the public domain outside of the U.K and is available in print form. It is difficult to find a second hand copy as well, even though I understand that millions of copies were printed in the past.

The primary reasons that this translation is relatively difficult to find in hard copy are:

Although it enjoyed better permanent reception than the [English Revision], it still has not seriously cut into the lead of the King James Version. (Guide to the Bible, 809)

Interestingly, in part because of its use of the word "Jehovah," the ASV did achieve popularity with one group, the Jehovah's Witnesses.

The ASV's popularity declined even further as new translations appeared. The Revised Standard Version (1952) dropped the Elizabethan style of the ASV, making it more accessible. It was the first serious challenger to the KJV, and was used by Protestants and Catholics alike.

Not long after, other translations appeared based on the ASV. The New American Standard Bible (1971), for example, quickly displaced the RSV in conservative circles due to perceived textual issues, and it is still a top-ten Bible translation. Similarly, the Jehovah's Witnesses largely moved on to the New World Translation (1961).

One of the main reasons people today use the ASV is due to its public domain status: it is freely available in many Bible software packages and online.

However, this popularity does not carry over to print copies. Relatively few used copies exist because the ASV failed to supplant the KJV early on, and it was largely replaced by more modern translations over 40 years ago.

Michael C. Armour, in A Newcomer's Guide to the Bible, describes how the ASV simply didn't find a niche—it is too different from the KJV for purists, but too similar to it for most modern readers:

Due to the great popularity of the King James Version, with its Elizabethan English, the translators of the ERV and the ASV felt they needed to retain the Elizabethan style. This decision, unfortunately, limited the period of time in which these two versions would be influential. Even though both were quite popular prior to the Second World War, neither is widely read any more. There style is too antiquated for most modern readers, and those who like the Elizabethan style have shown a preference to continue using the King James Version. (240)

The English Committee having dissolved itself soon after 1885, the American Committee alone issued the ASV in 1901, with improvements over the RV.

The revision of the ASV, originated in the USA, had planned to bring in UK involvement; but World War 2 intervened. Nelson's had financed the RSV, and wished it to be published as soon as possible; so, the RSV NT was issued in 1946, and the RSV NT in 1952.

Had there been resumed co-operation between the UK and the USA, probably in the form of a standing Anglo-American Revision Committee, we should have had a very much-improved RSV, probably with marginal readings and/or slightly different editions, where residual disagreement remained; and we might not have been faced with the fiasco of the following many versions. I say "might", because publishers must produce new translations in order to gain profit, and academics must issue new translations in order to gain kudos. All that was needed was an improved RSV, gradually and cautiously improved over time, by way of an enlarged and/or second margin. And, yes, publishers and academics have admitted as much, when I have questioned them.

The appalling consequence of the failure of the RSV has been the destruction of what the men of the nineteenth century, themselves keen to improve the AV/KJV, called "our common version". Alas! we now have no such version. 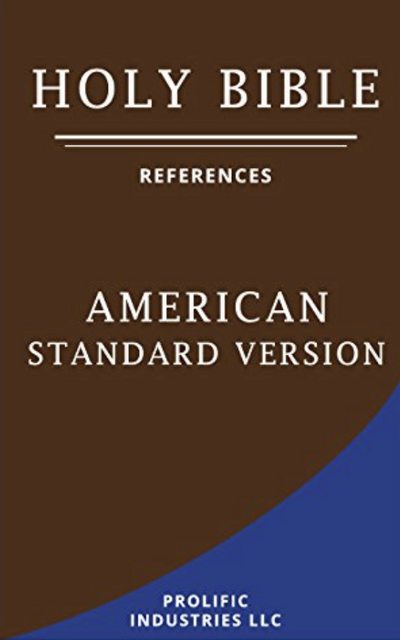 The ASV teachers edition is the best study Bible I have ever seen when it comes to cross references. I have a reprint put out by Star Bible but it is now once again out of print. However, I have found it on Kindle! I have attached the image (I hope). If not, it has Prolific Industries LLC on the cover. You will not be disappointed if you like the ASV.

Not the answer you're looking for? Browse other questions tagged bible-translation asv .