What happened to Nebuchadnezzar's kingdom during his punishment

Reading Daniel 4:29–33, I understand that Nebuchadnezzar was punished by God due to his pride.

During his punishment, did his kingdom cease to exist or was there a new king? Who was in charge of his position during his madness?

Daniel 4:29-33 is the culmination of writings, beginning with a Babylonian history, a series of Dead Sea Scroll fragments known as pseudo-Daniel and then the biblical book of Daniel.

M. H. Henze (The Madness of King Nebuchadnezzar, pages 57ff) identifies King Nabodinus (556-539) as the last king of Babylon, although his name never appears in the Hebrew Bible. His history was put together from a number of Babylonian cylinders discovered in 1854 at Tell al-Muqayyar (Ur). One of the cylinders names the king's son as Bel-sarra-usur, who was quickly identified as Belshazzar, given in Daniel as the son of Nebuchadnezzar. Thus it was possible to identify Nabodinus of the Babylonian texts with Nebuchadnezzar of the Book of Daniel.

The Babylonian texts tell us that Nabodinus left Babylon for ten years, to sojourn in Teima in the Arabian Peninsula, where he spent his time in devotion to the moon god, Sin, while his son Belshazzar ruled as regent in Babylon. On page 63, Henze says that according to a wide consensus, the story of Nebuchadnezzar's madness contains a recollection, however distorted, of Nabodinus' self-imposed exile at Teima.

The discovery of the Dead Sea Scrolls between 1946 and 1956 confirmed a link between the Babylonian writings and Daniel chapter 4. One Scroll fragment, known as 4Q The Prayer of Nabonidus closely resembles the account we see in Daniel 4:29-33. 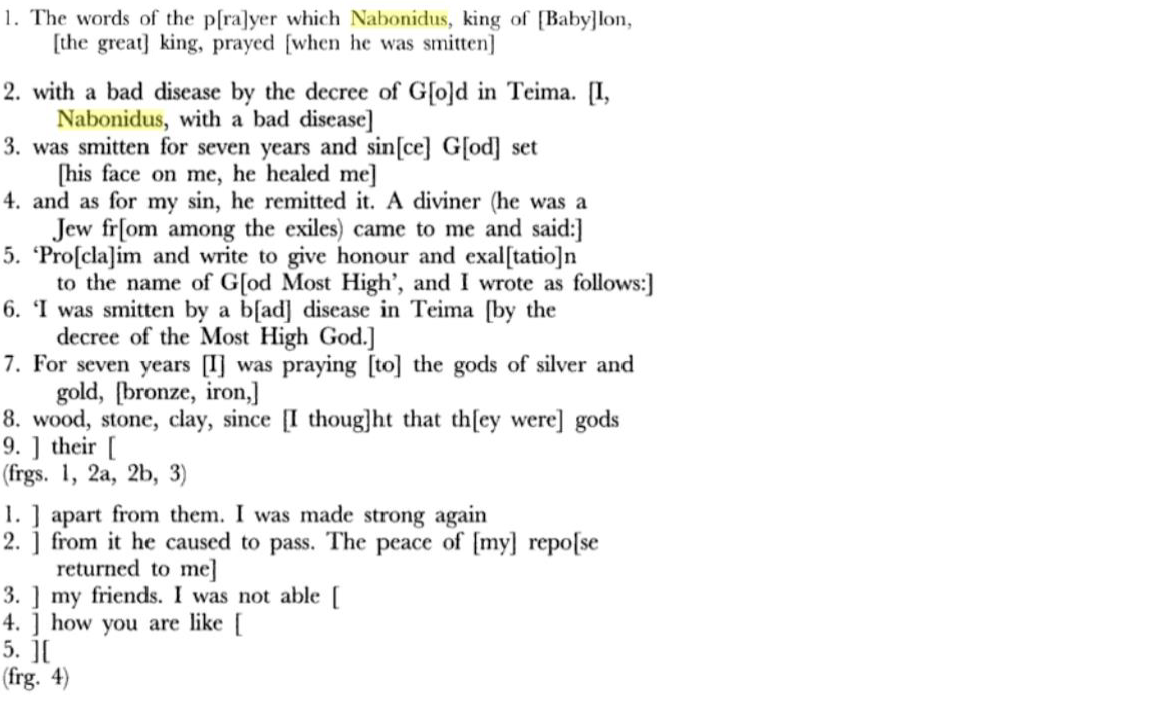 Craig A. Evans, Peter W. Flint (Eschatology, Messianism, and the Dead Sea Scrolls, page 58) say the Aramaic Prayer of Nabonidus mentions Nabonidus and Teima, while agreeing with Daniel in giving the length of the sojourn as seven years. It describes the king as having a bad disease and attributes his recovery to a Jewish exile, without mentioning anyone called Daniel. Evans and Flint say we may conclude that 4QPrNab occupies an intermediate place between the Babylonian accounts of a historical incident and the formation of the Book of Daniel.

We know from the Babylonian histories that the kingdom continued during the absence of Nabonidus (Nebuchadnezzar), with his son, Belshazzar, acting as regent.

Dick HarfieldDick Harfield
13.5k11 gold badge1919 silver badges4242 bronze badges
add a comment  |
Like any library, Christianity Stack Exchange offers great information, but does not offer personalized advice, and does not take the place of seeking such advice from your pastor, priest, or other trustworthy counselor.

12
What happened to the Book of the Law in the time of Josiah?
4
If there were no punishment for sin would salvation be necessary?
6
What is the argument supporting that there is a break between the 69th and 70th week in the book of Daniel?
7
How do we know that Judas was a “wealthy landowner”?
4
According to the Catholic Church, why does God hurt others to punish David in 2 Samuel:24?
1
What particular action that is in excess to God's Permissive Will did Satan commit in the Garden of Eden?
9
What evidence is there from scripture for why Daniel did not eat the King's food?
2
What is the Dispensational Interpretation of Daniel’s Stone Kingdom?
2
Can you find scholarly support that Behemoth is an example of humble submission?
3
How do Jehovah's Witnesses justify their interpretation of Daniel chapter 4 given the specificity of the text?