Why are psalms in the bible printed with funny spacing?

What is the significance of the awkward spacing (on the right below) when songs are printed in the bible? Is this spacing in the original scripts, or is it assumed by the translator somehow? 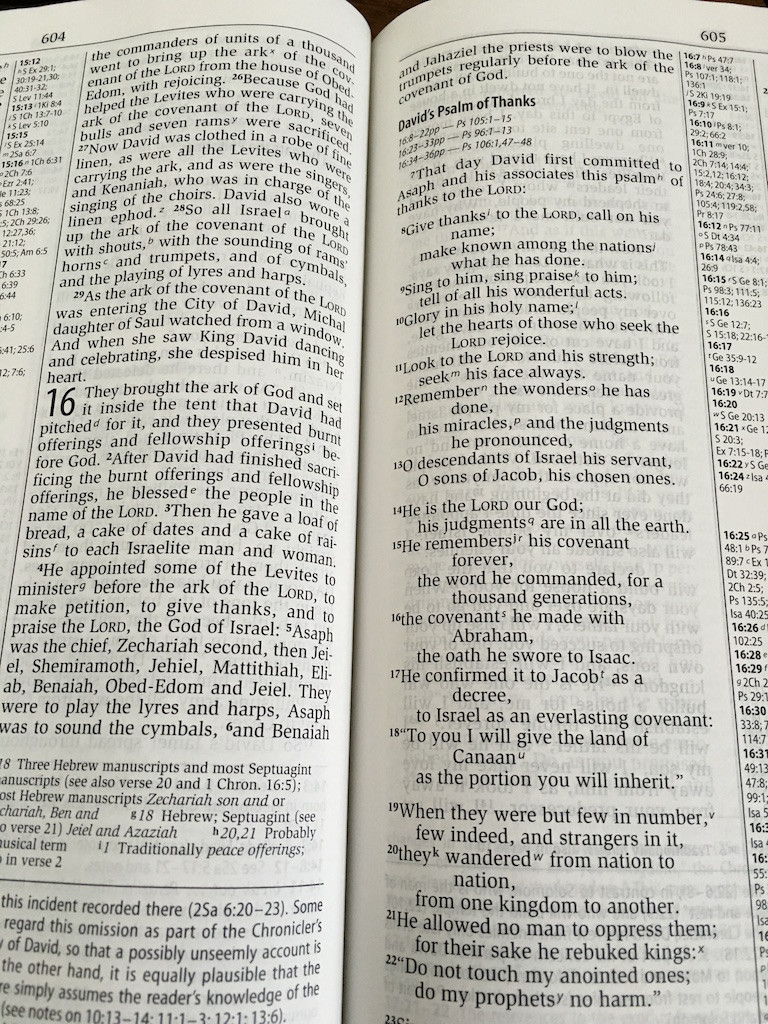 What is the significance of the awkward spacing (on the right below) when songs are printed in the bible?

First, to state the obvious: the translators have determined that this represents poetry. Within the domain of poetry, the "awkward spacing" you ask about has a technical name: stichometric division. Unfortunately, neither what constitutes poetry nor how the lines ("stiches") should be divided are necessarily straightforward decisions.

As noted in another answer, the oldest manuscripts available to us make no indication of the boundary between prose and poetry. The oldest available manuscript widely regarded as containing poetic elements is the famous Great Isaiah Scroll from among the Qumran documents (a.k.a. Dead Sea Scrolls), dated to the 2nd - 4th C. BCE. At the link, start at the right and hover over the lines for information about correspondence to modern versification. Then open any modern translation and note that the boundaries between poetry and prose (e.g. 1:1-2; 3:17-18; 3:26-4:1, etc.) are not marked in the Scroll.

The fact that the line between poetry and prose is not always obvious is evidenced in many places in translations of the Hebrew Bible. For instance, compare Isaiah 4:2-6 is viewed in some translations as poetry and in others as prose, as seen at the link.

Some characteristics are shared between English and Hebrew poetry and thus may seem intuitive to the English reader. These include:

On the other hand, rhyme, a typical feature of English poetry, is rarely present in Hebrew poetry. Finally, two features of Hebrew poetry have been the source of much debate: parallelism and meter. More on these below.

How to divide the lines?

This is also frequently less-than-obvious. Compare Isaiah 5:7 in the NRSV, GNB, and NAB:

For the vineyard of the LORD of hosts
is the house of Israel.

Israel is the vineyard of the
LORD Almighty.

The vineyard of the LORD of
hosts is the house of Israel.

This is an unusual degree of disagreement among translations. Still, the criteria for dividing the line are surprisingly indistinct. One feature that may be taken into consideration is meter. However, for many years there has been a debate about whether syllables or accents ought to be counted when discerning rhythm and meter. Furthermore, many now agree that meter in the sense it is known in Greek, Latin, and English poetry, is simply not a characteristic of Hebrew poetry.2

On the other hand, various forms of rhythmic regularity continue to be identified, and these often contribute to stichometry. If you open a scholarly commentary on a poetic book, you may see designations like these (Isa. 5:3): 3+2, 3+2. Here the commentator has counted primary accents:

3+2 is sort of a "normal" pattern, so this may be used to justify such line divisions, although whether one counts accents or syllables can alter the conclusions, secondary accents are of indeterminate import, and the whole thing turns out to be very slippery. (Peterson and Richards demonstrate that several other conclusions about the accent structure of this verse are possible. In their opinion, "there are no regular and predictable patterns of rhythm.") Thus, this can only be one factor of several to be considered.

The task is made easier when the proposed metrical scheme lines up with the semantic parallelism. This brings us to another feature that figures into stichometry: parallel relationships. Take a look at Psalm 19:1:

The heavens declare the glory of God,
and the sky above proclaims his handiwork.

This verse includes parallelism at both the level of syntax (i.e. grammatical form) and semantics (i.e. meaning). The Hebrew goes subject-verb-object / object-verb-subject, a syntactic chiasm. Semantically, this is a nice example of the first of the three main types of parallelism:

Whether or not parallelism is a defining feature of Hebrew poetry, and whether meter should be discerned at all continue to be debated among scholars. Regardless, various expressions of parallelism and rhythm (if not strictly meter, see note 2) are important considerations for translators (and, indeed, modern printers of the Hebrew text) when deciding how to divide the lines ("stiches") to aid the reader in understanding the structure of poetry.

Notes
1. The most obvious here is the so-called definite direct object marker, the absence of which has an effect similar to the freedom of word-order: loosening up the syntax.

2. This is the view of Peterson and Richards (below). These authors define rhythm: "a cadence, contour, a figure of periodicity, and sequence perceptible as a distinct pattern capable of repetition and variation". Meter: "more or less regular poetic rhythm..."

References
David L. Petersen and Kent Harold Richards. Interpreting Hebrew Poetry (Fortress Press, 1992). Most of the factual statements regarding scholarly consensus are based on statements in this text, and the Biblical examples given here arise from discussions in that book, except as below.

David J. Reimer, Introduction to the Poetic and Wisdom Literature in ESV Study Bible, Ed. Wayne Grudem and Lane T. Dennis. (Crossway, 2001): 865-868. The parallelism example and discussion as well as the general features of Hebrew poetry are based on this helpful introduction.

The original Hebrew manuscripts have line breaks only to fit lines on the page, and they have no punctuation. The formatting of Psalms and other songs in the Bible is added by the translators and editors. They add formatting based on the meter of the Hebrew poetry in the Psalms and songs.

Because most Bibles are printed in two-column format, there's not enough space for the lines, making it necessary to break up lines that would be a single line in a wider single column format. That's why some of the lines are indented extra, beyond the usual indent for "second" lines in poetic format.

Not the answer you're looking for? Browse other questions tagged bible bible-translation .

10
What are the benefits of a red letter edition Bible?
10
What sources are used for the Christian Bible translations?
79
What major translations of the Bible are in the Public Domain?
3
Why are verses missing in the Psalms in my Bible?
1
What are the details for the Catholic position on the inspiration of Scripture?
6
How many languages has the King James Version been translated into?
12
Are subheaders of Bible chapters part of the original text?