Does the Catholic Church rank the cardinal virtues?

The three theological virtues which serve as the basic foundation for all others are faith, hope, and love. The cardinal virtues which build upon them are temperance, justice, wisdom, and courage.

Does the Catholic church have or condone any sort of official ranking system for the virtues? There are numerous minor virtues which flow out from the cardinal virtues- is there a map or chart which organizes and shows the causal connection?

From the Recapitulatio of Fr. Réginald Garrigou-Lagrange, O.P.'s De Virtutibus Theologicis (p. 20), a commentary on St. Thomas Aquinas's Summa Theologica II-II, he gives the following categorization of the virtues (virtutes), following the organization of St. Thomas's treatment of the virtues in his Summa: 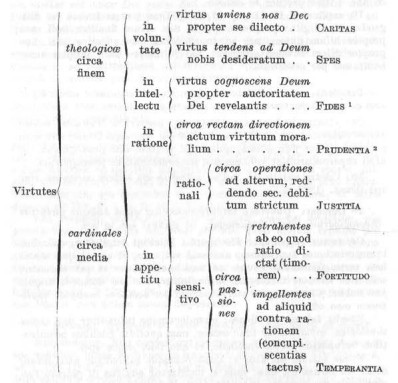 Prudence is indeed first among the cardinal virtues because it it deals with the "right direction of the acts of the moral virtues." Thomistic thought holds that "The will follows, does not precede, the intellect" (Thesis 21 of the 24 Thomistic Theses.)

The intellectual virtues are divided as follows (cf. Reality: A Synthesis of Thomistic Thought ch. 47 art. 2 "Classification of the Virtues"):

The rest flow from it, knowing what is right and choosing to do it is the basis for the other 3 virtues.

This what is taught in the 8th Grade Faith and Life series textbooks distributed by Ignatius Press. I don't know what catechetical reference there is for it and I don't have the textbook any more. But it expands on how the cardinal virtues relate to specific gifts of the Holy Spirit.

The Cardinal virtues and the Theological virtues aren't explained in the text as being interconnected in that way. I think you find their comingling in the gifts of the Holy Spirit more than anything. The Cardinal virtues are ranked by St. Paul and I've heard that the greatest is love because that's what will still be there I Heaven, so it is greater because it is eternal.

Not the answer you're looking for? Browse other questions tagged catholicism faith love ethics justice .

2
Can baptized non-Catholics be virtuous?