Why is Satan referred to as Beelzebub? [closed]

In one of the passages in the bible, Satan is referred to Beelzebub which means "lord of flies." But why flies? Why is this name so significant?

So, why did the committee of men who produced the King James Version write "Beelzebub" instead of "Beelzebul"? It cannot be known for certain, but it could be that they were influenced by St. Jerome who produced the Latin Vulgate. In it, he wrote Beelzebub when transliterating Βεελζεβούλ into Latin.

It is interesting to note that the Peshitta also has the Syriac equivalent of "Beelzebub," that being ܒܿܥܠܙܒܼܘܼܒܼ (note the ending: ܒܼ /b/ ather than ܠ /l/):

Even more interesting is that Symmachus, who produced another Greek translation of the Hebrew Tanakh in the late 2nd century A.D., translated the Hebrew phrase בַּעַל זְבוּב into Greek as Βεελζεβούλ, the same word (name) which occurs in the Greek NT. 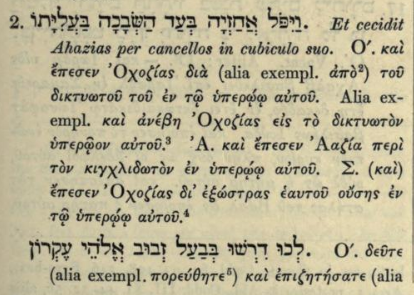 So, why did St. Jerome write Beelzebub in Latin rather than Beelzebul? In his commentary on Matt. 10:25, St. Jerome wrote,

And Ahaziah fell down through a lattice in his upper chamber that was in Samaria, and was sick: and he sent messengers, and said unto them, Go, enquire of Baalzebub the god of Ekron whether I shall recover of this disease. (KJV, 1769) 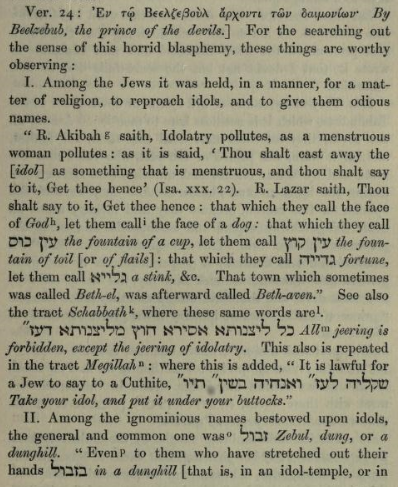 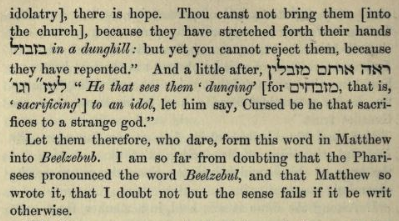 According to this theory, Βεελζεβούλ is the Greek transliteration of the Hebrew phrase בַּעַל זֶבֶל ("lord of dung") or בַּעַל זָבוּל ("lord of dunghill"), which itself would be an intentional alteration of בַּעַל זְבוּב ("lord of flies") for the purpose of repudiating idolatry. While the verb זָבַל (zaḇál) and its related derivatives do not occur in biblical Hebrew (to my knowledge), they do occur in later Mishnaic Hebrew, which would have been known during the time of New Testament. Jastrow (p. 379) notes that the noun זֶבֶל (zéḇel) means "manure," i.e. dung.

According to the Jewish Encyclopedia entry on "Idol Worship,"

Although the Jews were forbidden in general to mock at anything holy, it was a merit to deride idols (Meg. 25b), and Akiba decreed that the names of the gods be changed into derogatory names (Sifre, Deut. 61, end, et passim). Thus, Baal-zebub (II Kings i. 2, 6) is called Beel-zebul (בעל זבול = "dominus stercoris") in Matt. xii. 24, 27, and elsewhere, and the word with which the Talmud designates sacrifice to idols (זבל; Yer. Ber. 13b) literally means "to manure."

Satan as the "Master of the Dunghill" and "Prince of Demons"

1 And Uriel said to me: 'Here shall stand the angels who have connected themselves with women, and their spirits assuming many different forms are defiling mankind and shall lead them astray into sacrificing to demons as gods, (here shall they stand,) till the day of the great judgement in 2 which they shall be judged till they are made an end of. And the women also of the angels who 3 went astray shall become sirens.' And I, Enoch, alone saw the vision, the ends of all things: and no man shall see as I have seen. (R. H. Charles)

Jastrow, Marcus. A Dictionary of the Targumim, the Talmud Babli and Yerushalmi, and the Midrashic Literature, Vol. 1. London: Luzac; New York: Putnam, 1903.

Beelzebub is the Greek translation of Baalzebub, who was a pagan diety of the Philistines. After the time of the Philistines, the Jews changed the name to Beelzeboul, meaning “lord of dung.” The significance of that name is that it references the god of the fly, worshiped in hope of offering protection against bites and stings from flies.

The name can also be translated into Lord of Filth.

Since the name is only referenced in the New Testament by Jesus and Jewish officials, it can be likely concluded that it was a name that was assigned to Satan due to its repulsive imagery of filth and waste as a sign of derision towards Satan. It is clear from the context of the gospels that the name is held in very low, detestable regard by those who use it.

Not the answer you're looking for? Browse other questions tagged exegesis terminology satan or ask your own question.

10
Why do people interpret "Lucifer" as being Satan in Isaiah 14?
8
Do any other denominations agree with the Jehovah Witnesses that Satan was cast to earth in 1914?
6
What is "the spirit of this world." referred to by John-Paul II
6
Why does Jesus refer to serpents positively in Matthew 10:16?
9
According to Baptist theology why doesn't Satan surrender?
4
How do Jehovahs Witnesses understand Jesus inheritance of Gods name
0
According to Catholicism, who is the leader of devils?