Have any major Christian intellectuals responded to Stephen Hawking's "The Grand Design"?

Stephen Hawking, in The Grand Design, argues that God did not create the universe. One review of the book states its aim as "to banish a divine creator from physics".

The essence of the argument is:

Because there is a law such as gravity, the universe can and will create itself from nothing. Spontaneous creation is the reason there is something rather than nothing, why the universe exists, why we exist. It is not necessary to invoke God to light the blue touch paper and set the universe going.

Are there any books or articles written with a Christian world view as a foundation that address and incorporate what physics has to say about the cosmos, but still make a strong case that all things were created by God? Such a response, written in a way that makes sense to somebody like him, but that remains firmly Biblical, would be a fascinating thing to read.

God and Stephen Hawking, by John C. Lennox, is a popular direct reply to The Grand Design.

Alister McGrath calls it "a brilliant response," and the book won an Award of Merit in Christianity Today's 2012 Book Awards.

Whether it "makes sense," as you say, to Hawking, is perhaps debatable. But Lennox is no slouch: he's a Professor at Oxford University, prominent Christian apologist, and author of many books.

Lennox, as well as several other apologists, responded to The Grand Design in article form as well:1

Nonetheless, the most prominent direct response to Hawking's book appears to be Lennox's God and Stephen Hawking.

1. Other similar resources are listed on Apologetics 315. 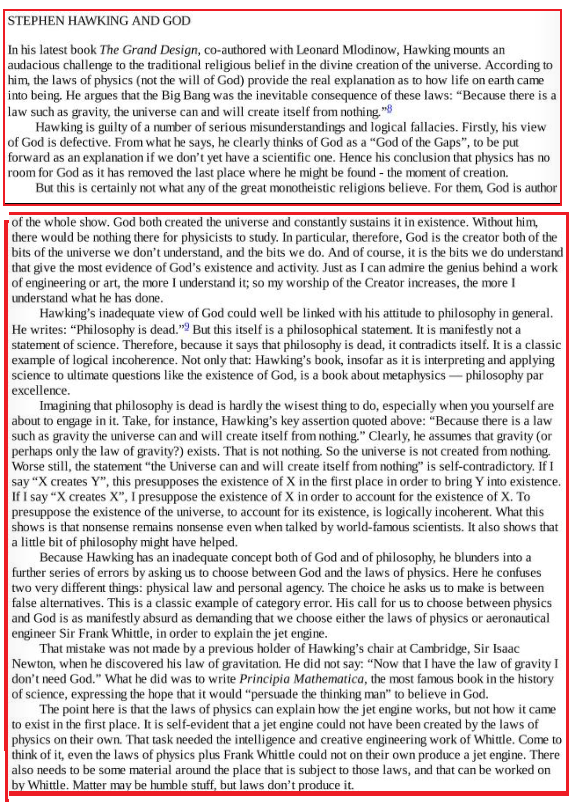 John Lennox's book: Gunning for God - Why the New Atheists are Missing the Target directly covers and quotes this exact passage from Hawking you quoted, and addresses it. I am reading it at the moment.

The Last Superstition By Edward Feser addresses this.

Not the answer you're looking for? Browse other questions tagged creation apologetics science christian-literature existence-of-god .

8
Any philosphers arguing that the Christian worldview is the most rational?
6
Do any Christian traditions hold the belief that Adam was androgynous?
8
What are typical Christian responses to The Grand Inquisitor?
3
Who was the first major Christian figure to popularize a figurative interpretation of Genesis?
6
Have Creationists advanced any particular Theories of Origin that they claim are falsifiable via the scientific method?
14
Have any ante-Nicene writings been discovered in the past 20 years?
3
Have any Christian theologians discussed whether Jesus resembled Joseph?
4
Is naturalistic cosmology pointing us back to viewing stars as gods (similar to how pagans did), crediting stars with giving meaning to the universe?

// TODO sg: TMP solution until we are confident in our current implementation of async imports // once we are, we can move the if into the js entry file and dynamically load the mark obsolete module