It is doubtful that St. Francis would have prayed what we know now as the contemporary rosary consisting of five decades of Hail Marys. The two saints were contemporaries as St. Dominick lived AD 1170- AD 1221 and St. Francis lived AD 1181- AD 1226. St. Dominick was a Spanish Priest and founder of the Dominican orders. St. Francis of Assisi was the son of a very wealthy Italian merchant who heard a call to "Rebuild My Church" and lived his life in poverty. He enjoyed preaching in the countryside, avoiding the parish churches and preached the Gospel in common Latin rather than ecclesiastical or church Latin. (REF: "Roaming Catholics: ending the wandering to embrace the wonder" by Kenneth Behr, Xpyria Press 2015 page 155)

Based on historical research, the development of the practice of using beads in prayer has a very significant connection to the practice of the early monks in their Liturgy of the Hours that included reading through the 150 Psalms. This practice was abbreviated into the Breviary (from the Latin 'brevis' meaning short or concise) and associated with knots in a cord and ultimately prayer beads. The 150 knots or beads were reduced to multiple decades of tens. For the common people that could neither speak nor read Latin, a poor man's Breviary was introduced to keep track of their chants, and the difficult-to-memorize Psalms were changed to that of the Paternoster (Our Father).

The modern day rosary was most likely introduced in the 14th century by groups of Christians who had a deep devotion to the Virgin and modified the poor man's Breviary into five decades of Hail Marys rather than the Our Fathers. (REF: "Roaming Catholics, page 82)

"Since the Rosary is composed, principally and in substance, of the prayer of Christ and the Angelic Salutation, that is, the Our Father and the Hail Mary, it was without doubt the first prayer and the principal devotion of the faithful and has been in use all through the centuries, from the time of the apostles and disciples down to the present. It was only in the year 1214, however, that the Church received the Rosary in its present form and according to the method we use today." - http://www.theholyrosary.org/rosaryhistory

Historically there is not evidence to support an answer either way.

What we do know is that there was a tradition of praying with knotted prayer ropes. Certainly St. Francis and St. Dominic were aware of this tradition and the illiterate brethren would have availed themselves of this method to substitute the Our Father and the Hail Mary prayers for the recitation of the Psalms.

Knotted prayer ropes were used in early Christianity; the Desert Fathers are said to have created the first such, using knots to keep track of the number of times they said the Jesus prayer.

According to pious tradition, the concept of the Rosary was given to Saint Dominic in an apparition of the Virgin Mary during the year 1214 in the church of Prouille, though in fact it was known from the ninth century in various forms. This Marian apparition received the title of Our Lady of the Rosary. In the 15th century it was promoted by Alanus de Rupe (aka Alain de la Roche or Blessed Alan of the Rock), a Dominican priest and theologian, who established the "fifteen rosary promises" and started many rosary confraternities.

According to Herbert Thurston, it is certain that in the course of the twelfth century and before the birth of St. Dominic, the practice of reciting 50 or 150 Ave Marias had become generally familiar. According to 20th century editions of the Catholic Encyclopedia, the story of St. Dominic's devotion to the Rosary and supposed apparition of Our Lady of the Rosary does not appear in any documents of the Church or Dominican Order prior to the writings of Blessed Alanus, some 250 years after Dominic. However recent scholarship by Donald H. Calloway, which has received the endorsement of some of the Church hierarchy, seeks to refute this claim. -Rosary

In any the Hail Mary at the time this Dynamic Duo did not contain the words: ”Pray for us now and at the hour of our death.” That was added to the Hail Mary as a result of the Black Plague!

How the Black Plague changed the "Hail Mary" prayer.

What we do know is that not only were St. Dominic and St. Francis were not only contemporaries, but were great friends.

In fact, they once met at Rome in 1215 in most glorious circumstances. Up to the reforms of Vatican II, the Dominicans and Franciscans of Rome held this encounter as a local feast day, sometime in December. Nevertheless they still observe particular religious customs that very unique between their own religious institutions.

In the summer of 1215, St. Francis and a small group of friars were in Rome seeking approbation for his Rule. One night while Francis was praying, he saw Our Lord prepared to unleash the most terrible chastisements upon the world. The Virgin Mary made an effort to placate Him, asking His mercy and forgiveness by presenting two men who would labor for the conversion of the world and return a countless number of lost sheep to the fold. Francis recognized himself as one of these apostles. He did not recognize the other one, however.

The following day, while St. Francis was in church, an unknown man suddenly came up to him and embraced him. Francis recognized him as the other man in the vision. St. Dominic, who had also received a similar vision, upon seeing St. Francis immediately greeted him with the words, “You are my companion. We will work together, supporting one another toward the same end, and no one will prevail against us.” 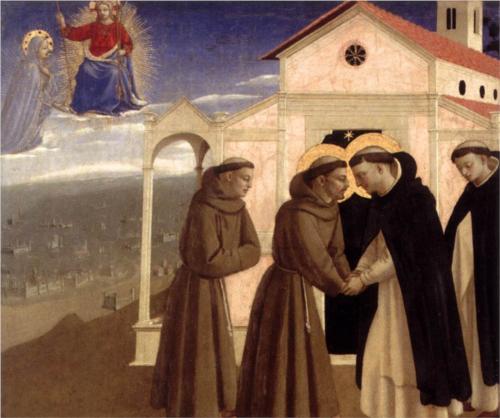 The Meeting of St. Francis of Assisi and St. Dominic

To this day, both Franciscans and Dominicans visit each one another on patron’s feast day as a feast day to celebrate this unique encounter at Rome. For example, a Dominican priest will give the the homily at a Franciscan Friary on the Feast of St. Francis (October 4). This is reversed on the Feast of St. Dominic (August 8). How universal this tradition is I am unaware of.

In the end, I will let the reader decide if it was possible that St. Francis prayed the rosary or not. As for me, I think there is a reason possibility that he availed himself of this tradition as it was understood in his days! 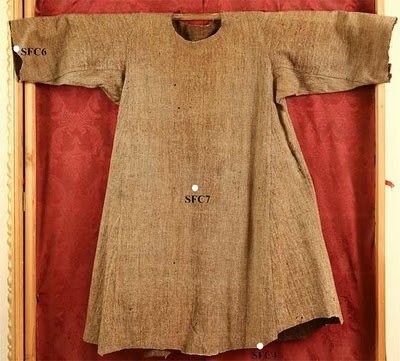 This is the actual tunic worn by St. Francis of Assisi

The rosary existed before St. Dominic's and St. Francis's time (13th cen.). In at least the 11th cen., four psalters—that of 150 Our Fathers, in Honor of Our Lady (150 Hail Marys), Our Lord (150 phrases referring to Our Lord's life), and Life of Our Lady (150 phrases on her life)—existed, which morphed into the rosary as we know it (Willam The Rosary: Its History and Meaning ch. 4).

The early biographies of St. Dominic do not say that the Saint invented the rosary, for the prayer is much older. The first to give credit to St. Dominic is Alain de la Roche, towards the end of the fifteenth century. Yet to the Dominican Order belongs the honor of having popularized the devotion with such success that soon it became the most beloved devotion in the Church.

The Dominicans are an order of preachers; they preached (not just prayed) the rosary; they taught the mysteries of the rosary in addition to leading guided meditation on them with vocal prayer.

My wife is dressing my son Francis up as... St. Francis for an All Saints party.

It seems you're asking when the rosary prayer cord became part of the Dominican or Franciscan habit.

Augustine Thompson, O.P., in "The Domincan Habit and the Holy Rosary", concludes "that the custom of wearing a habit Rosary become more or less universal in the late 1600s" and "the Holy Rosary has been an official part of the Dominican Habit since the promulgation of the revised Constitutions of 1924."

would he have avoided it as being something the distinguished his order from St. Dominic's

St. Dominic and St. Francis wanted to unite their orders into one, but St. Francis thought the Dominicans' owning books was not in the spirit of Franciscan poverty.

Not the answer you're looking for? Browse other questions tagged rosary francis-of-assisi or ask your own question.

21
What is the purpose of a Rosary?
5
What's a reiki infused rosary?
1
How do young Catholics remember a set of prayers in order to pray the rosary?
5
How is rosary different from chanting Mantra?
3
Why did St. John Paul II add the Luminous Mysteries to the Rosary?
4
What was the original rosary?
4
Does Pope Francis want Catholics to pray both new prayers at the end of the Rosary or just one or the other?
7
How to pray and meditate while saying the rosary?