What evidence is there that the genealogies in the early part of Genesis refer to tribes instead of individuals?

One method of interpreting the genealogies in the early parts of Genesis is as not referring to actual individuals, but rather to tribes, nations, and groups of people represented by the names of individuals. What evidence (internal or external) do people who support this interpretation cite?

The evidence that the genealogies in the early part of Genesis refer to tribes instead of individuals is disarmingly simple. It is seen especially clearly in Genesis 10, which is commonly referred to as the Table of Nations. Here is the introductory verse of the chapter:

This is the account of Shem, Ham, and Japheth, Noah's sons, who themselves had sons after the flood. (Genesis 10:1)

These are the clans of Noah's sons, according to their lines of descent, within their nations. From these the nations spread out over the earth after the flood. (Genesis 10:32)

So although Genesis 10 is in the form of a genealogy of the descendants of Noah's three sons, the names in the genealogy are identified with the nations that repopulated the earth after the Great Flood had destroyed all of humanity except for Noah, his sons, and their wives.

Here is a visual representation of the Table of Nations in Genesis 10 in which the various names are placed in their most likely geographical regions on a map of the ancient Biblical world: 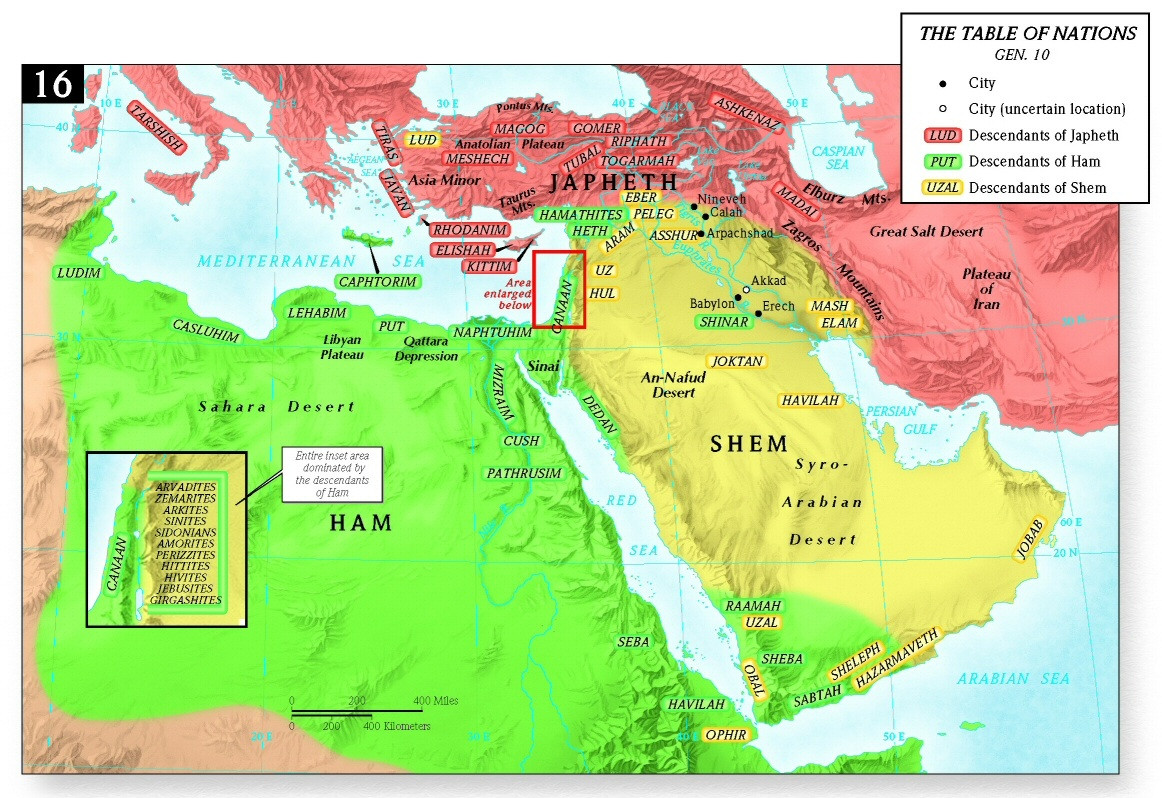 As graphically represented on this map:

The names in these three genealogies are a catalog of all the major nations and races of the ancient Biblical world within these general racial groups. Some of them figure prominently in the Bible story, such as Egypt and Canaan in the genealogy of Ham, and Ashur (Assyria) and Eber (an ancestor of Abraham) in the genealogy of Shem. Others are mentioned only occasionally elsewhere in the Bible narrative.

From Genesis 10 we can project the same principles to the earlier chapters of Genesis, making it very likely that the earlier genealogies, such as the one in Genesis 5, also refer to whole races and nations of people that inhabited the earlier, pre-Flood world.

And as Dick Harfield's answer points out, some scholars believe that figures in later genealogies, including the twelve sons of Jacob, also represent tribes rather than individuals.

Looking backwards from the time Genesis was written down, there is potential evidence to regard individuals as representing nations or tribes rather than being actual persons. In attempting to explain the existence of the different nations that surrounded them, the Israelites could be seen to have believed each nation to have had a single ancestor, just as they believed themselves to be descended exclusively from a single ancestor, Jacob.

On this view, Ham's son, Canaan, retrospectively came to represent the Canaanite people. The Canaanites of historical times were despised by the Israelites, and so in Israelite tradition Canaan was cursed for the sin of his father:

Genesis 9:24-25: And Noah awoke from his wine, and knew what his younger son had done unto him. And he said, Cursed be Canaan; a servant of servants shall he be unto his brethren.

Among the next generation, Sidon was the firstborn of Canaan, representing the Canaanite city of Sidon.

Lester L. Grabbe says in Ancient Israel, page 106, it seems likely that the system of twelve tribes in the biblical tradition is a late development, perhaps as late as the sixth century BCE. The names of the actual tribes of Israel would be assigned to the biblical sons of Jacob and of Joseph. So, for example, because there was a tribe known as Ephraim, one son was given the name Ephraim. Another son was named Judah, and so on.

Not the answer you're looking for? Browse other questions tagged exegesis genesis apologetics genealogy or ask your own question.

8
How do Theistic Evolutionists reconcile that Eve was called the “the mother of all living?”

9
When 1 Timothy cautions against “endless geneologies”, is it talking about the Bible?
20
In Theistic Evolution when do the genealogies in Genesis become real?
14
What evidence is there that the Chinese script reflects a knowledge of Genesis 1-11?
4
What is the Catholic understanding of 'reign with him' in 2 Tim 2:12?
7
How do Eastern Christians explain Jesus “sending” the Holy Spirit in John 15:26?
5
How can the “Son of Man” passages of Matthew 24 be interpreted as a fulfilled prophecy?
5
What is an overview of non-literal methods of interpreting the Bible in Christianity?
4
Where in the Biblical narrative does God first reveal himself as the only living and true god?
11
What's the origin of this approach of trying to obtain meaning from the individual letters of Hebrew words?