Do the Roman catacombs confirm the early church believed in the doctrine of the communion of saints, which includes prayer for the dead, intercession of the saints, invocation of the saints, and the threefold nature of the Church, in particular, the Church triumphant and Church penitent? If so, what are some of the archaeological evidence in the catacombs that confirms the early Church held such beliefs?

What is the communion of saints?

The ninth article of the Apostles' Creed is, 'the Holy Catholic Church, the communion of saints'.

The unity and cooperation of the members of the Church on earth, in Purgatory, in Heaven is also called the Communion of Saints.

And the Church teaches:

Fully conscious of this communion of the whole Mystical Body of Jesus Christ, the pilgrim Church from the very first ages of the Christian religion has cultivated with great piety the memory of the dead, and "because it is a holy and wholesome thought to pray for the dead that they may be loosed from their sins", also offers suffrages for them. The Church has always believed that the apostles and Christ's martyrs who had given the supreme witness of faith and charity by the shedding of their blood, are closely joined with us in Christ, and she has always venerated them with special devotion, together with the Blessed Virgin Mary and the holy angels. The Church has piously implored the aid of their intercession. To these were soon added also those who had more closely imitated Christ's virginity and poverty, and finally others whom the outstanding practice of the Christian virtues and the divine charisms recommended to the pious devotion and imitation of the faithful. [...] - Dogmatic Constitution on the Church, Lumen gentium, 50.

To find out whether the Roman catacombs bear out this communion of saints, one would need to examine their inscriptions and paintings. This New advent article Roman Catacombs gives some examples of the inscriptions:

"gave up his soul to God"

and in the Catacomb of Domitilla, third century there is:

The beginning of the inscription, containing the name, has disappeared. "May thy spirit be in refreshment". The very ancient prayer in the Canon of the Mass entreats for the dead locum refrigerii, lucis et pacis (a place of refreshment, light, and peace).1

The article then continues to say the paintings of the catacombs conveyed pictorially the same ideas as the inscriptions.

I see these as demonstrating the communion of the saints, with the latter two praying for the departed.

Chapter V of the book Epitaphs of the Catacombs: Or, Christian Inscriptions in Rome During the First Four Centuries by Rev J. Spencer Northcote D.D entitled The Teaching of Christian Epitaph about Death and the Dead has the following introductory summary:

Contrast between Pagan and Christian epitaphs — Christian epigraphy perfected by degrees, but its general character shown from the first ; simple, hopeful, and joyous ; less religious in the fourth and later centuries — Life and love characteristics of the most ancient epitaphs — Some exceptions, chiefly of later date — An episcopal instruction on death in the third century — Language of epitaphs denotes belief in future resurrection — Acclamations for the dead ; of life in God, peace, refreshment — These phrases and some others explained — The same prayers found in the Liturgies, ancient and modern — Prayers addressed to the dead by surviving friends and relatives — Religious character of these prayers and their orthodoxy.

The chapter then gives examples: 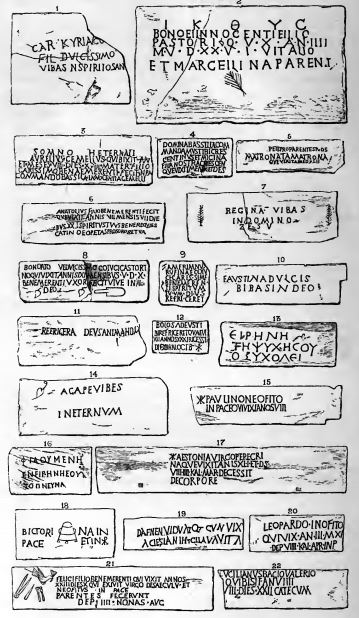 Thus the living were commending the recently dead to a saint already dead; the dead were being petitioned to pray for the living; and God is petitioned to refresh the souls of the departed, all clearly manifesting the communion of saints.

Be mindful, O Lord, of thy servants and handmaids N. and N., who are gone before us, with the sign of faith, and sleep in the sleep of peace.

He joins his hands, prays a little while for those dead whom he means to pray for, then with his hands stretched out, continues:

To these, O Lord, and to all that rest in Christ, we beseech thee, grant a place of refreshment, light, and peace.

Information for the Visit to the Catacombs.

In the catacombs, sometimes rich or more well to do would leave some sort of memento at the tomb of a saint as a reminder of a particular saint to pray for them. The poor and slaves would simply write on the walls things like "Petri ora pro Victor" (Peter pray for Victor). I can still remember seeing this sort of graffiti along with various other debris in the catacombs when I was in Rome, notably la scavi. It is all too evident, that the catacombs prove that the early Christians believed in the communion of saints. Giovanni Battista de Rossi's work La Roma Sotterranae (1877) contains much information on such subjects found in the Roman catacombs.

The Church has had a long tradition that St. Peter’s Basilica, construction of which was funded by the Emperor Constantine, was built in the early fourth century atop the burial site of St. Peter. But in 1939–less than 100 years ago–a team of workmen digging a grave for Pope Pius XI in the crypt beneath the Basilica uncovered what was plainly the top of a Roman building. The new pope, Pius XII, ordered further investigation; and archeologists gradually unearthed a well preserved Roman necropolis, or city of the dead, immediately beneath the foundations of St. Peter’s.

On one graffiti wall, amid Christian symbols and petitions, the name of Peter is carved at least twenty times, usually accompanied by prayers for the dead person, and in one case expressing joy that the deceased relative lay in the same cemetery that held the body of St. Peter. - How Does the Vatican Know That Those Old Bones Are the Relics of St. Peter? 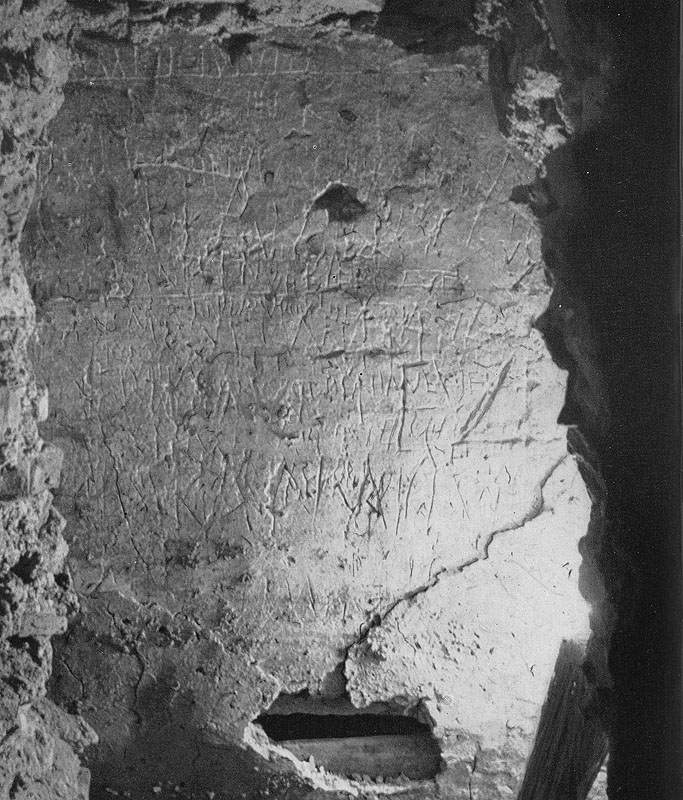 The Graffiti Wall, on the north side of the Tropaion, showing the repository. (Fabbrica di San Pietro)

Unknown to the archaeologists at the time, there had been a serious blunder early in the excavation. Early in 1942, when the team had first discovered the Graffiti Wall at the north side of the Tropaion, with its curious marble receptacle slightly exposed, they had initially chosen not to disturb it, wishing to fully photograph and document the valuable graffiti before risking damage to the plaster by reaching into the hole. When they finally did examine it, they found nothing inside but a medieval coin, some bone fragments, and other debris. - The Bones of St. Peter 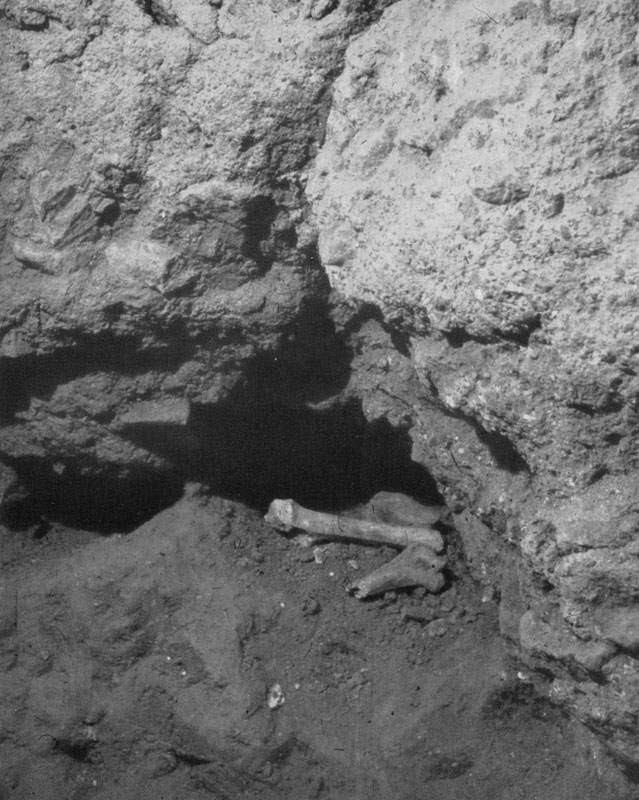 The bones found beneath the Red Wall (briefly replaced there for the photograph). (Fabbrica di San Pietro)

This structure is perpendicular to the red wall, built on the right-hand side (north) of the trophy of Gaius during the second half of the 3rd century. The wall gets its name from the surprising amount of Latin graffiti carved into the plaster by the faithful who visited the tomb of St Peter between the end of the 3rd and the beginning of the 4th centuries.

The graffiti includes names, petitions, Christian symbols of complex interpretation and signs superimposed on one another on the reduced surface of the wall.

In abbreviated form, St Peter's name is present on the wall at least twenty times, usually accompanied by prayers for the dead person named - in one case expressing joy that the lost relative lay in the same cemetery that held Peter's own body. On every part of the wall - freestanding between the letters of a name, formed from or engrafted onto existing lines - there occurred the initials PE or PET. - Necropolis (Scavi) Graffiti Wall G The bones of St Peter

Further information may be gleaned from the following articles:

10
Are there any biblical examples of Early Church disciples praying to deceased saints in order to request their intercessory prayer?

7
Is there a generally accepted term for "Christians in Communion with the Bishop of Rome"?
10
What is the Biblical argument used by Evangelical Christians against the Catholic doctrine of the invocation of the saints?
4
Communion of saints - Is there a Greek equivalent of "ecclesia penitens"?
9
Is there any evidence in the Roman catacombs that the Early Church had a devotion to the Virgin Mary?
6
Is there any evidence to support the claim that the Apostle St. Peter founded the Church in Antioch and, if so, what are the implications?
5
Is there any historical evidence that the early church believed in the doctrine of intercession of saints during the 1st and 2nd centuries AD?
3
What is an overview of the early Church's viewpoints on Christology at the time of the Apostolic Era?
9
What are the strongest apologetic arguments in defense of the veracity of the doctrine of Intercession of Saints?
1
According to 'Intercession of Saints' adherents, is two-way communication between the dead and the living possible?
7
How widespread was Marian devotion during the first two centuries of Christianity?