Works are necessary for salvation but they do not cause salvation; for faith alone gives life. -- Martin Luther

We are justified by faith alone, but not by a faith that is alone. -- Martin Luther

In my view, its a very subtle and insignificant distinction from salvation by faith and works. Take a look at these pictures: 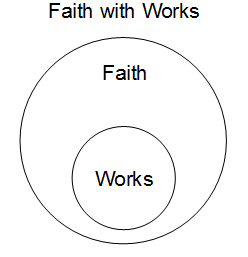 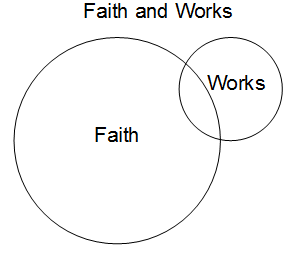 As far as I can tell, both doctrinal traditions will save the exact same group of people.

Am I correct? Is the difference inconsequential? If so, why is so much effort put forth to distinguish the two?

First a disclaimer, I come from the camp that salvation is by faith alone. The answer will be coming from my perspective, since the question seems to be geared toward those who hold this view. It also intentionally goes against the definition of Christianity as accepted for the sake of this community because I think that it's the only way to address the question. I fully expect opposing answers and down-votes, but I'm also attempting to answer the question to the best of my ability because it's important.

The difference is very important. It's not inconsequential at all.

The reason it is important comes down to three things (in addition to what I read in the Scriptures):

Ephesians 2:8-9 KJV: For by grace are ye saved through faith; and that not of yourselves: it is the gift of God: Not of works, lest any man should boast.

To my view, and those who hold it, if we are attempting to add works to faith, then we are not depending solely on God or the saving grace of Jesus. We are depending at least somewhat on ourselves. Since we're told that we are saved by faith along apart from the works of the law (Romans 3:28) if we try to add our own works on top of it, we're not obeying in faith.

We're placing part of the faith in ourselves, and (this may be harsh) we're calling God a liar by rejecting His clear word on the subject. In essence, we're worshiping a "god" of our own making - one we've created in our mind, which is, by definition, idolatry.

This is not to say that works aren't important. Works are a sign that we have already been saved by faith, and something we do out of gratitude. I personally would argue that someone who is not showing good works is probably not truly saved because they are not showing the fruit of salvation. But I wouldn't be dogmatic about it because I don't know the heart or state of salvation of anyone.

There's a good article on the subject here.

I'm adding this later as an illustration that may make the answer of whether it's a "minor detail" more precise.

Expanding on what I said about taking credit for our own salvation as being pride. Pride is in and of itself a sin. God hates pride.

Even a little bit of taking credit for our owns salvation is like having a "little bit" of sin. It's not something that can be seen in shades of gray. It really is an all-or-nothing black-or-white issue. Our pastor often uses an illustration in which he holds up a clear glass of water and asks if anyone would object to drinking it. Then he asks, "OK, let's add just one drop of urine to it. How many of you would drink it then?" It's gross, yes. Disgusting. But that's the point. God's holiness is so supreme that even the smallest hint of sin is sickening to Him. Adding the least bit of our own "works" to His gift pollutes the gift.

In Isaiah 64:6, we read that all of our righteousness is as filthy rags. Not our sin, our righteousness - the very best we are capable of is worthless to Him. How could we possibly hope to add to our own salvation when the best we can do is no good at all?

Since the "faith alone" viewpoint has been well represented thanks to @DavidStratton, I will propose an additional diagram that doesn't fit into either of the two in the question, This is the view posited by Eastern Orthodox Christianity. I will abbreviate Eastern Orthodox as EO for the remainder of this response.

Rather than a Venn diagram including faith and works (with faith shown as being more preeminent), or a diagram with works following and slightly overlapping with faith, EO views faith and works as two sides of the same coin (and as equally important). 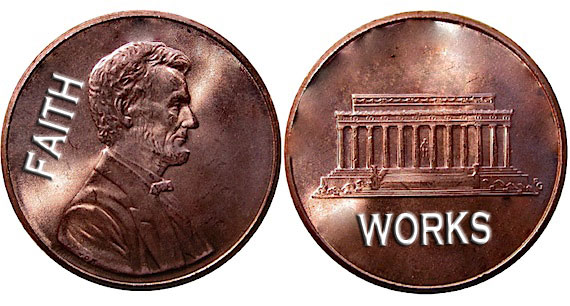 Orthodox Christianity teaches that belief in Jesus must be combined with putting that belief into action - feeding the hungry, ministering to others, etc. Both are essential. We read in the epistles:

"What good is it, my brothers and sisters, if someone claims to have faith but does not have works? Can this kind of faith save him? If a brother or sister is poorly clothed and lacks daily food, and one of you says to them, 'Go in peace, keep warm and eat well,' but you do not give them what the body needs, what good is it? So also faith, if it does not have works, is dead being by itself. But someone will say, 'You have faith and I have works.' Show me your faith without works and I will show you faith by my works. You believe that God is one; well and good. Even the demons believe that – and tremble with fear" (NET, emphasis mine).

One can indeed 'believe' in Christ and yet lead a life that betrays that belief. Hence belief alone is not sufficient. Jesus said, "Not all who say 'Lord, Lord' will have a place in my Kingdom" (Matthew 7:21). Thus EO view grace and works as a synergistic process. Synergy comes from a Greek word that essentially means "cooperation" or "working together."

EO does not view grace as God's attitude towards man, it is more of a real energy or power that He gives to man freely, which enables us to have faith in Him and do works that please Him.

A great video explanation that contrasts the Protestant vs. Orthodox views of salvation is available here, and there is a good article available by Don Fairbairn that explains five perspectives commonly held by Protestants of EO and how each is justified or incorrect according to Fairbairn's beliefs. Also, the website of the Orthodox Church in America (OCA) is very helpful in understanding EO beliefs and practices as well.

I would just like to expand on @Dan's comments regarding the catholic (lower-case c) perspective on faith and works. In the Roman rite of Christian Orthodoxy (aka Roman Catholic), the concept of salvation is explained by sola gratia (as in salvation only by grace), rather the the sola fide doctrine conceived by Martin Luther. If one is truly coporating with God in the reception of his free gift of grace, both faith and works will be evidenced (due to the salvific and empowering nature of God's grace itself). If not, only one or the other, or nethier will be visibily demonstrated from the individual professing Christianity.

Yes, the two doctrines are quite different, you cannot be saved by your works, but there must be works with your faith for you to find salvation. In other words, it's not the works that saves your soul, but without the works your faith is in vain and of none effect.

@David Stratton probably said as much in his response and the subsequently linked articles, but to be succinct, a faith without works isn't real faith. Works are a demonstration of that faith, not essential as if they are tallied somewhere, but a proof (perhaps more to yourself than anyone else) of what you really believe.

I might add that we're not saved by faith, rather by grace, but faith is the acceptance of God's gift. God does not save someone against his will. We must accept the gift, but that acceptance does not make us in any way worthy of it, as if we could demand it of God.

I would like to suggest that neither part of your sentence addresses the whole truth, and that Ephesians 2:, 8-10 does:

"By grace we are saved, through faith, and that not of yourselves; it is the gift of God, 9 not of works, lest anyone should boast. 10 For we are His workmanship, created in Christ Jesus for good works, which God prepared beforehand that we should walk in them."

The above scripture says it is God's grace that saves us, through faith, and further, it states that this 'saving' is a gift, which means free, and we do not get it by working for it. Then is added, we are God's new creations, purposed as we are put 'into Christ Jesus', for the good works that God Himself preplanned before our salvation, that we should do them.

This scripture answers the reasoning around your question.

I think the bottom line is, drawing from Mathew 25, where Jesus informs us that works are vitally important, that salvation can be forfeited if works do not follow.

HelloHello
88833 gold badges88 silver badges2121 bronze badges
Add a comment  |
Like any library, Christianity Stack Exchange offers great information, but does not offer personalized advice, and does not take the place of seeking such advice from your pastor, priest, or other trustworthy counselor.

16
What are the key differences between the Western and Eastern Christianity?

14
How do "Sola Fide" adherents reconcile with the three aspects of faith?
8
What roles do faith and works play in the LDS/Mormon understanding of salvation?
9
What is the biblical basis against Sola Fide (salvation by faith alone, apart from works)?
17
What is the Protestant belief known as "faith alone"?
6
Salvation by good works alone?
4
Are there any major Protestant denominations that have rejected salvation by faith alone?
9
Did Pelagius believe in "faith alone"?
6
What is an overview of Lutheran faith-alone systematically taught before Martin Luther?
0
Is there a sect who adopt "salvation by works and exaltation by both: faith and works"?