How do those who believe man is tripartite respond to Gen. 2:7, "the man became a living soul"?

Those who believe that man is bipartite (a soul consisting of body and spirit) cite Gen. 2:7 as proof that man does not have a soul, but rather, man is a soul. Consequently, they deny any assertion that a soul continues to exist after the death of the body (i.e., disembodied soul). Yet, certain scriptures seem to confirm the existence of an embodied soul, such as 1 Thes. 5:23,

And the very God of peace sanctify you wholly; and I pray God your whole spirit and soul and body be preserved blameless unto the coming of our Lord Jesus Christ. (KJV)

The apparent contradiction can be reconciled if we understand that the author of Gen. 2:7 is using the Hebrew word נפש (Greek ψυχή) as a synecdoche of part for the entire person.

In Approaching Jehovah’s Witnesses in Love: How to Witness Effectively without Arguing, Ch. 6, Wilbur Lingle wrote, 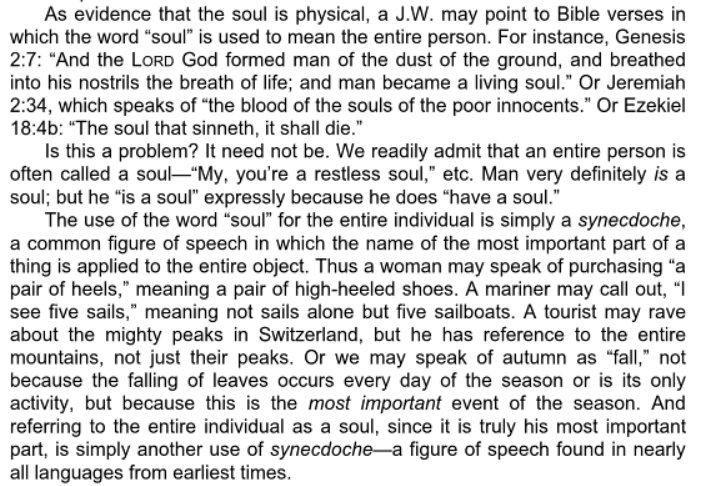 In Figures of Speech Used in the Bible, p. 840, Ethelbert William Bullinger defines the synecdoche of part:

Hence, נפש is used to represent the entire man because it represents one of the more important parts of man.

However, many misguided religious people have a need to correlate non-biblical concepts to a biblical special number, to elevate the status of their theory.

Therefore, with the following evidence (that demands a verdict), the question is akin to asking, "Do animals have a psyche, do they breathe?"

Does psyche actually equate to breath? Maybe, it does because in some cultures when they say "my liver bleeds for you", we know they mean the same thing as when we say "my heart longs for you".

There too many occurrences of nefesh in the Hebrew of the Bible.

"Soul" is an anglo-saxon word for which translators have picked and chosen inconsistently when to use to translate from nefesh. I would say, it is close to being pagan. When reading the Bible, one should cleanse one's mind of all pagan or hellenistic predispositions.

Are there 10 commandments, 11 commandments or 12, or 613 ?? When I was little, my sister asked me to count the number of commandments in the book of Leviticus vs Deuteronomy - my count came out to more than 1000.

In Statistics of component analysis, grouping and classification methods, we can dimensionify a spectrum of a field into more than 100, to 14 or down to 5, depending on the basis we use for each observation.

Is your basis consistent? Who gives you the right to define nefesh one way, and then another, to your whims and fancies? Why should I depend on anecdotal opinions of "theologians" that have no biblical basis?

Maybe, the human is a continuum between flesh and spirit. There is no distinct boundary, and nefesh is merely a segment within the spread of the spectrum of a human's existence. Did the Bible say that - no. Did the Bible refute that - no.

Is the spine part of the human mind? Why not? Physiologically, our attitudes are influenced by the synapses experienced thro the spine.

Is the heart part of the human psyche? Is muscular memory part of my psyche? Are the nerves?

The theology of the human soul is an unnecessary, and often inaccurate, endeavour towards our ultimate quest of having a relationship with our Creator.

The confusion from trying to understand the tripartite person stems from the fact that the human mind is not geared to comprehend the difference between the Spiritual realm and the physical realm. Our minds are geared to comprehend real as things that stimulate the five senses. We only accept as true those things which we can see, hear, touch, taste, and smell.

In actuality the material realm is not the true essence. It is preliminary to Christianity to believe that God created all material things. What is the truth in believing in the supremacy of God is that the Spiritual realm is preexistent to the Material realm.

So what does that statement actually mean? If we are to believe that God is Supreme then we have to accept the first chapter of Genesis. That necessitates that we believe that God, Heaven, The Angels, Satan, and etc. are all of the Spiritual realm. That is to say that they preexisted Chapter one of Genesis. We must also accept that God is the supreme being in the Spiritual realm.

By accepting Chapter one of Genesis, we are in reality accepting that the material realm has a beginning; while the Spiritual realm is eternal.

So let's take a look at what transpires in Chapter one of Genesis; and we are doing so in the belief that we accept Genesis as fact.

Genesis 1:26 KJV And God said, Let us make man in our image, after our likeness: and let them have dominion over the fish of the sea, and over the fowl of the air, and over the cattle, and over all the earth, and over every creeping thing that creepeth upon the earth.

So if we take the first part of that Scripture and allay that to God's creation of man, what we find is that if God consists of three persons, then if man is to be created in his likeness and his image; then he must first of all be tripartite as God is tripartite. Second man must be supreme to some degree since God is supreme. Therefore God:

Genesis 2:7 KJV And the LORD God formed man of the dust of the ground, and breathed into his nostrils the breath of life; and man became a living soul.

So let's take a look at what that actually says. And the LORD God formed man of the dust of the ground, this actually says that God took a part of his original creation and reformed it into a man, however; at this point it is nothing more than a lump which God has given a material form.

So now what do we have, we have the original lump which we call man, We also have the breath of life which is a part of God and therefore eternal, and lastly we have now residing in this lump that God created something that will be eternal.

And so we have now something eternal existing within something material. Or you might say that we have a bipartite creation part of the Spiritual realm paired with something from the Material realm. Even though this is a bipartite being (spiritual and material) it is also tripartite in that it contains two parts Spiritual (breath and eternal existence [also known as soul]) along with one part material.

Not the answer you're looking for? Browse other questions tagged genesis nature-of-man tripartite .

4
What is the biblical basis for the immortality of the soul?

7
A.W. Pink and the Tripartite Theory of Man
8
What is the essential argument in favor of the tripartite nature of man?
9
What is the biblical basis for the Dual Nature of Man as opposed to the Tripartite Nature?
3
How do proponents of the dual nature of man address Hebrews 4:12, "dividing soul and spirit"?
4
When was the tripartite (body, soul, and spirit) view of man officially rejected by a church council?
4
How does the Catholic church distinguish between the human soul and spirit?
4
What does Reformed Protestantism teach regarding 'spirit and soul and body' (I Thessalonians 5:23)