Why is archangel Michael portrayed with a sword in art?

There is no mention of Michael wielding a sword in the bible, so I wonder if there are references in other texts?

Michael the Archangel is depicted in the Bible as a warrior and leader of angel armies:

Daniel 12:1 (ESV)
At that time shall arise Michael, the great prince who has charge of your people. And there shall be a time of trouble, such as never has been since there was a nation till that time. But at that time your people shall be delivered, everyone whose name shall be found written in the book.

Jude 9 (ESV)
But when the archangel Michael, contending with the devil, was disputing about the body of Moses...

Not surprisingly, the early church understood Michael in this way, that he was a leader of heavenly armies (see Ancient Christian Commentary). Later writers developed more detailed understandings of angel hierarchies, and continued treating Michael as a military leader (see Pseudo-Dionysius and the Apocalypse of the Virgin).

Furthermore, in the time of early Christianity, the sword was the weapon associated with the upper classes and military leaders. The scene from Revelation is depicted in the statue below, where Michael is defeating the serpent, and we can see that he is portrayed much like a Roman soldier, complete with a sword: 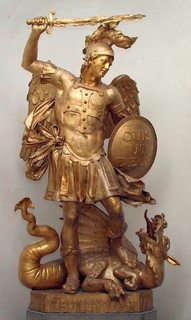 Given the biblical mentions of angels carrying swords and the use of swords in spiritual warfare, plus the historical predominance of the sword as a leader's military weapon, it's not surprising that Christians would depict the leader of heavenly armies carrying a weapon suitable for his position: a sword.

Not the answer you're looking for? Browse other questions tagged angels art michael .

12
What does 'first estate' mean in Jude 1:6 (KJV)?
6
Is there biblical reference to Michael, the archangel’s role and being?
8
Who do mainline Protestants believe an "archangel" (such as Michael) to be?
3
If Jesus ascended to heaven as Michael the angel why is he still called a man?
4
Besides St. Casimir, are any other saints portrayed with three hands in iconography?
8
Did Baptist and Methodists ever believe that Jesus is Michael the Archangel?
1
What does the Bible say about giving worship to a created being?