Is Jesus depicted as dead or alive on a crucifix?

According to Catholics, is Jesus depicted as dead or alive on a crucifix?

In the artistic treatment of the crucifix there are two periods: the first, which dates from the sixth to the twelfth and thirteenth centuries; and the second, dating from that time to our own day. ...

The representation is quite different in both periods. In the first period

... the Crucified is shown adhering to the cross, not hanging forward from it; He is alive and shows no sign of physical suffering; He is clad in a long, flowing, sleeveless tunic (colobium), which reaches the knees. The head is erect, and surrounded by a nimbus, and bears a royal crown. The figure is fastened to the wood with four nails ... In a word, it is not Christ suffering, but Christ triumphing and glorious on the Cross. Moreover, Christian art for a long time objected to stripping Christ of his garments, and the traditional colobium, or tunic, remained until the ninth century. In the East the robed Christ was preserved to a much later date. Again in miniatures from the ninth century the figure is robed, and stands erect on the cross and on the suppedaneum.

The transformation is more or less radical in the second period:

From the eleventh century in the East, and from the Gothic period in the West, the head droops onto the breast (cf. Borgia, De Cruce Veliternâ, 191), the crown of thorns is introduced, the arms are bent back, the body is twisted, the face is wrung with agony, and blood flows from the wounds. In the thirteenth century complete realism is reached by the substitution of one nail in the feet, instead of two, as in the old tradition, and the resulting crossing of the legs. All this was done from artistic motives, to bring about a more moving and devotional pose. The living and triumphant Christ gives place to a Christ dead, in all the humiliation of His Passion, the agony of His death being even accentuated. This manner of treatment was afterwards generalized by the schools of Cimabue and Giotto.

So, to conclude, nowadays it is more likely to find crucifixes depicting Jesus as dead, but this is not a law, but rather a custom, which has changed over the centuries.

It depends upon the crucifix. The Christus Rex crucifix

has Jesus on the cross, reigning in either high priestly, or kingly robes. This is quite apparently the triumphant, risen, living Christ.

On the other hand, the figures on the crucifix with the suffering Christ, 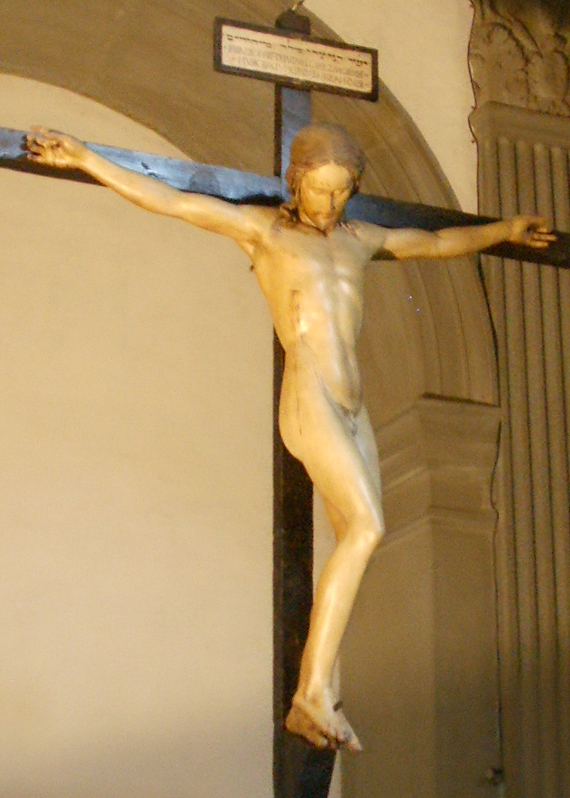 always seem to include a spear wound in his side, and usually a bowed head. Since in John 19, Jesus death is reported in verse 30 ("... he said, 'It is finished'; and he bowed his head and gave up his spirit." [RSV]), and the report that his side was pierced happens in verse 34, the suffering corpus depicts a Jesus who has died.

Not the answer you're looking for? Browse other questions tagged catholicism crucifix or ask your own question.

7
Why is Jesus portrayed and remembered in a state of suffering?

10
What's the origin of the Catholic object that is a staff with a crucifix on top?
16
What does INRI stand for?
5
Are crucifixes used in Protestant churches in Germany?
4
What is the Biblical support for praying for the dead?
6
According to Catholicism, will those who are alive on the Day of Judgement die physically?
12
Trying to find information on a crucifix found whilst metal detecting
0
Did Christ open the Door of Hell after he preached the Gospel in the realm of the dead?
5
Do any denominations use the full form of INRI?
1
Is the sign of the Cross as well as the crucifix a Catholic “trade mark”?