What is the basis for the Swedenborgian view that the most common concept of God in Christianity (the Trinity) is a belief in three gods?

The vast bulk of Christian denominations, representing the overwhelming majority of Christians, subscribe to the doctrine of the Trinity, which, boiled down to its essence, is "one God in three Divine Persons."

Non-Christian monotheists such as Jews and Muslims sometimes charge Christians with believing in three gods (a form of polytheism) based on this trinitarian doctrine.

However, even within Christianity, at least one group, the Swedenborgians, views trinitarianism as a belief in three gods, or tritheism.

What is the basis for the Swedenborgian view that the Trinity of Persons is a belief in three gods?

Though Swedenborgians generally don't put much focus on charging mainstream, trinitarian Christians with tritheism, a rejection of the Trinity of Persons is key to Swedenborgian doctrine. A key part of that rejection is that the traditional doctrine of the Trinity is viewed as being a belief in three gods rather than in one God, and therefore as being polytheistic rather than monotheistic. Strict monotheism is central to Swedenborgian faith and worship. Anything that conflicts with or endangers full, strict monotheism is therefore rejected.

The basis for the Swedenborgian view that the traditional Trinity of Persons is a belief in three gods rather than in one God is as follows:

Here is a quote from the Athanasian Creed, which is accepted as authoritative by the vast bulk of Christians and Christian denominations, showing that the situation is more complex than simply saying that the Trinity is one God:

For like as we are compelled by the Christian verity; to acknowledge every Person by himself to be God and Lord; So are we forbidden by the catholic religion; to say, There are three Gods, or three Lords. (Source: Athanasian Creed, from Wikipedia)

This statement perfectly encapsulates the fundamental contradiction in the doctrine of the Trinity, and the reason why every Christian theologian who expounds on it admits that it is a mystery that cannot be understood by the human mind, but that must nevertheless be believed.

The practical reality is that in thinking of Father, Son, and Holy Spirit each as distinct "persons" of God, the mind of the believer inevitably thinks of them as three different beings. This is tantamount to thinking of three gods, no matter how vigorously the believer says "one God" with the lips. Each person of God is given a distinct role, and they are conceptualized as interacting with one another as distinct personalities.

To illustrate this picture of three gods in the minds of those who believe in the Trinity, in Christian artwork the Trinity is commonly pictured as three distinct beings. In Western Christianity, most commonly the Father is pictured as an old bearded man, the Son as a young bearded man (often on the cross or associated with the cross), and the Holy Spirit as a dove. For example: 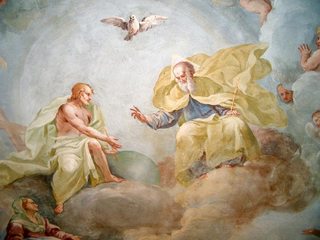 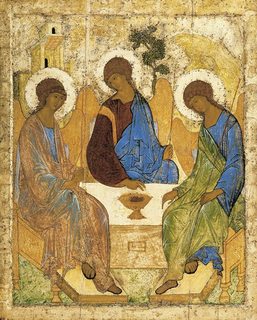 Clearly, though the lips are saying "one," the mind is thinking "three." But as the Athanasian Creed says, the church forbids the faithful from saying, "There are three Gods." Therefore faithful Christian trinitarians will always say, "There is one God."

Here is how Emanuel Swedenborg (1688-1772), whose theology is accepted in the various Swedenborgian denominations, articulates this contradiction between what the mind is thinking and what the lips are saying, based on the Athanasian Creed. This is from Swedenborg's True Christianity, #172:

This creed has been accepted by the entire Christian church as ecumenical or universal. Today everything known and acknowledged about God comes from it. Those who took part in the Council of Nicaea that gave birth to this posthumous child called the Athanasian Creed had no other concept of the Trinity except a trinity of gods, as any can see who merely keep their eyes open as they read it. Since then they have not been the only people thinking in terms of a trinity of gods; the Christian world thinks in terms of no other Trinity because its whole concept of God comes from that creed and everyone now lives in a faith based on those words.

I submit it as a challenge to everyone—both laity and clergy, laureled professors and doctors as well as consecrated bishops and archbishops, even cardinals robed in scarlet and in fact the Roman pope himself—that the Christian world nowadays thinks of no other Trinity except a trinity of gods. You should all examine yourselves and then speak on the basis of the images in your mind.

The words of this creed—the universally accepted teaching about God—make it as clear and obvious as water in a crystal bowl. For example, the creed says that there are three persons, each of whom is God and Lord. It also says that because of Christian truth, people ought to confess or acknowledge that each person is individually God and Lord, but that the catholic or Christian religion or faith forbids us to say three gods or lords. This would mean that truth and religion, or truth and faith, are not the same thing; they are at odds with each other.

The writers of the creed added the point that there is one God and Lord, not three gods and lords, so that they would not be exposed to ridicule before the whole world. Who would not laugh at three gods? On the other hand, though, anyone can see the contradiction in the phrase they added.

However, the Swedenborgian view is that no matter how many times this is said, the concept in the minds of those who believe in the Trinity is of three divine beings. This amounts to thinking of God as three gods, regardless of any abstract metaphysical statements about their being "one in essence," and regardless of the continually repeated statement that the three are one God.

Not the answer you're looking for? Browse other questions tagged trinity swedenborg non-trinitarian .

7
Is the concept of God in Christianity (the Trinity) three Gods or One?
4
What qualifies the 3 entities of the Trinity as one?

6
Is the Eastern Orthodox doctrine of "the Monarchy of the Father" consistent with the Athanasian creed?
9
Do any trinitarian Protestant traditions teach that anyone who denies the Trinity is necessarily unsaved?
4
What qualifies the 3 entities of the Trinity as one?
3
Is my view of the Trinity accurate, and what is exactly the role of the Holy Spirit
1
Does the Catholic's Trinity doctrine imply that the Unitarian God Multiplied into Three persons by Generating the other Two?
4
Are there published testimonies from Christians who independently discovered the doctrine of the Trinity on their own by just reading the Bible?
1
Are there published testimonies from Christians who had the truth of the Trinity revealed to them through the Holy Spirit?
3
What is the difference between the Trinity theory and modalism?
2
What is the Biblical basis for the belief that Trinitarian belief is “not” required for salvation?
2
Are there any Trinitarian denominations that do not view belief in the Trinity as a "salvation issue"?