Clarence Larkin projects a 7,000 year timeline of human history with each 1,000 years tied to a day of creation. 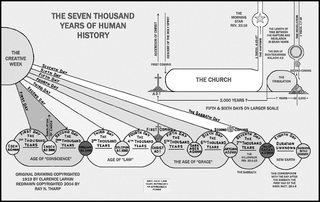 What is the doctrinal or biblical basis for this theory?

biblical-basis eschatology
Share
Improve this question
edited May 22, 2014 at 6:00

Since you don't have any other answers at this point, I'll go ahead and throw out the ideas that I'm seeing play into this graph:

Well, there are definitely many, many more doctrines at play in this. For example:

However, those above are the "big ticket" items that are not necessarily common or are potentially debatable.

Many of these doctrines were popular at the turn of the 20th century and many are popular now as well. The one that stood out to me as somewhat surprising was the anagogical interpretation of Genesis 1. Outside of that, this really seems to be a pretty straight-forward conglomeration of many prominent doctrines.

To supplement the existing answer, perhaps the earliest Christian exposition on the idea of a 7000-year history corresponding to the seven days of the creation week is found in the Epistle of Barnabas, written in the early- to mid-second century AD.

In chapter 15, the author reinterprets the first six days of Genesis 1 as an allegory for six-thousand years of history (with the author believing he was living near the end of that sixth millennium).

He then anticipates these six 'days' to be followed by a seventh 'day' Sabbath rest, i.e. a thousand years of rest brought on by the second coming of Jesus:

At first the author seems to describe this seventh 'day' Sabbath as lasting forever, using ideas that typically are reserved for the new creation (e.g. describing this seventh millennium as the time 'when iniquity is no more and all things have been made new by the Lord'). Sticking strictly to the creation week of Genesis 1-2, this would seem appropriate. But then the author alters the formula by adding in an eighth millennium, basing the idea on Jesus' resurrection on the the 'eighth day' of the week (i.e. Sunday, the day after the seventh day Sabbath).

Finally he says to them: "Your new moons and your Sabbaths I cannot endure." You see his meaning: Your present Sabbaths are unacceptable to me, but in the Sabbath I have made, when I have set all things to rest, I will make the beginning of the eighth day, that is, the beginning of another world. Wherefore, also, we keep the eighth day with joyfulness, the day when Jesus rose again from the dead too.

(Textually, there is no evidence Barnabas was relying on Revelation 20 in his anticipation of a future thousand-year rule of Jesus.)

It should be noted that while this is the predominant position of most of protestant Christianity, many who hold this view do not like or use the term YEC, [Young Earth Creationist].
This is also true of one of the most well-known and respected teachers, Ken Ham, who says that anything that is 6000- 10,000 years is ancient, not young. So a more accurate term is Literal Biblical Creationist.

In addition, each day of creation in Genesis 1 is marked by ‘evening’ and ‘morning’, so it is impossible to stretch the days out to millions of years on Earth. (See: The numbering pattern of Genesis for a more in-depth analysis of the Hebrew syntax in this regard). The days in Genesis 1 are clearly a reference to man’s time—or more specifically, a literal day on Earth—marked by an evening and a morning. Continuing contradictions The order of creation in the Bible contradicts the evolutionary order in over two dozen places, and stretching the days out into long periods of time only makes the matter worse. For example, the Bible tells us that the plants were created on Day 3, but the sun, moon and stars were created on Day 4. Aside from the plain, common sense reading of literal days, each one being defined by an evening and a morning, is there any other evidence from scripture, and outside of scripture? Yes and Yes!

This is a very important passage and is almost always overlooked, but the significance cannot be overstated. Genesis 6:3 NIV 3 Then the Lord said, “My Spirit will not contend with humans forever, for they are mortal; their days will be a hundred and twenty years.”

Rev 20:3-6 3. The angel then threw him into the abyss and locked and sealed it so that he could not deceive the nations until the one thousand years were finished. (After these things he must be released for a brief period of time.) 6 Blessed and holy is the one who takes part[m] in the first resurrection. The second death has no power over them, but they will be priests of God and of Christ, and they will reign with him for a thousand years.

Then, we also see the concept of the earth being several thousands of years in the Jewish calendar which is used by tens of millions of religious and secular Jews around the world. This is because the Jewish scholars understood the geneologies in the Tanakh - What Protestants call the Old Testament to be literal.
So even those Jewish secular scholars who reject the New Testament, and may not be religious say that the current year on the Jewish calendar is 5781. https://www.science.co.il/israel/holidays/#:~:text=In%20the%20Hebrew%20calendar%2C%20a,5781%20(%D7%AA%D7%A9%D7%A4%22%D7%90).

Not the answer you're looking for? Browse other questions tagged biblical-basis eschatology .

14
What is Young-Earth Creationism, and how is it argued for?