What is the meaning of the large statue of a pine cone in Vatican City?

What is the meaning of this statue in Vatican City? 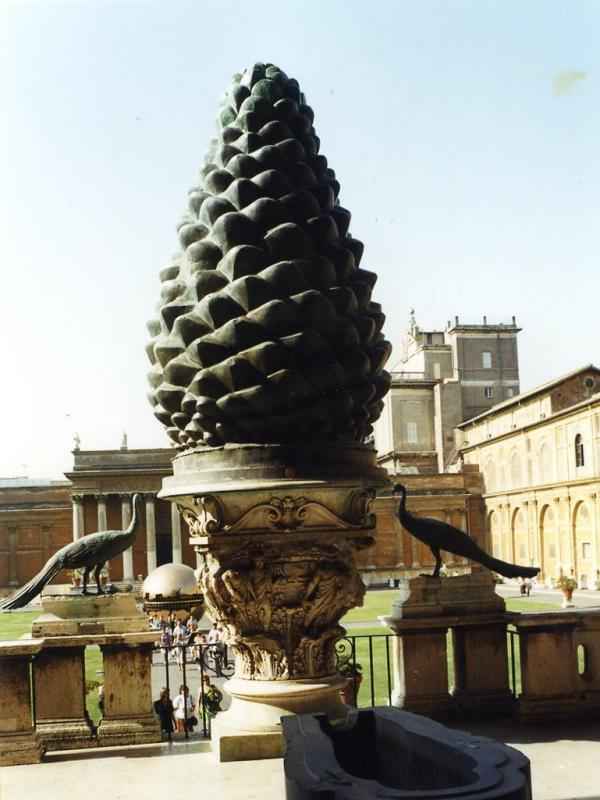 It is a sculpture created by Publius Cincius Salvius. It was a former Roman fountain; Fontana Della Pigna. It predates the Vatican owning the land.

The colossal bronze pine cone was cast in the 1st or 2nd century by Publius Cincius Salvius who left his name on the base. This was way before the Catholic Church was given the property upon which Vatican City sits. There is much pre-Christian and non-Christian art in the Vatican and its museums

and from St. Peter's in the Vatican by William Tronzo pg 31

Of equal obscure origin is the colossal pinecone (pigma), over 11 feet tall, which dominated the immediate approach to the basilica as the centerpiece of the fountain in the atrium. Signed by its maker, the freedman Publius Cincius Salvius, the pigma has been dated on the basis of the letter forms to the first century CE. It may have been made as a fountain. As icons of fecundity and regeneration, pincones appeared from the time immemorial on the tip of the Bacchuc thysrus. The Romans placed them in fountains, and monumental cones were also placed as finials on funerary buildings, with the same symbolic connotations. In late antiquity, the most conspicuous use of the ancient regenerative symbolism was made by the cultists of Cybele, whose rites, as noted earlier were practiced on St. Peter's doorstep until the very end of the fourth century. the pine tree signified Cybele's fickle lover, Attis, and the ritual felling of pine on the spring equinox, during the public festival called hilaria, baldly symbolized Attis's castration, thanks to which he was able to rise to a higher order of being. Pine trees with prominent cones appear on most of the taurobolium altars that have survived, including those attributable to the Vatican Phrygianum.

So then, to Christians, I suppose the statue has little significance except that it's beautiful and old - really old. To others, there may be a different meaning. I believe it was Paul who said that as long as it doesn't make YOU do evil things, then there is nothing wrong with it. I believe this was about eating unclean meat, but you get the idea

Not the answer you're looking for? Browse other questions tagged catholicism symbolism art vatican-city .

7
How did the second Vatican council (aka Vatican II) address the concept of limbo?
8
What would the Catholic Church's hierarchy look like without the Vatican?
12
Why are the Vatican archives kept secret?
3
How were the Vatican I and Vatican II councils related?
5
What is the meaning behind this coin of Pope St. John Paul II?
1
To what extent can faithful Catholics criticize Vatican II?