Is all the land in the universe called Earth?

The other day, me and my friends were discussing about End times pertaining to Mat 24, and came across this verse

"My words are always true and always here with you. Heaven and earth will pass away, but My words will never pass away"
Mat 24:35

Which says, the earth will be destroyed and a new earth and heaven will be formed according to Rev 21:1. And how Isiah predicts the calamities can be read from this answer.

But I was thinking, maybe if this earth will have such problems, what they can be avoided by migrating to other planets?

Hence the question, do those verses mean only our Earth or the whole land in both Mat 24:35 and Gen 1???

I think there is no mention of other planets of this universe in the Bible.

So, my question is in general How is "earth" interpreted. Could the word be applied to the land of the whole universe?

I request you to focus on the title "Is all the land in the universe called Earth?"

The only good answer to this is "We don't know". And we don't know because the people writing the book had no concept of 'land outside of our planet'. For them there were only three parts to creation: Heavens, Earth and the Underworld, floating on a cosmic ocean. It is completely impossible to definitively state whether their words were intended to include parts of creation they had no idea existed.

People have attempted to deduce more about the writer's intentions, but the deductions are all subject to interpretation. You can choose somebody's interpretation if you wish.

This question stems from a lack of understanding of what the ancients believed "heavens and earth" mean, or what they believed the whole of creation looked like.

The Ancients weren't aware of other planets. Just earth, hence they are referring to the Earth when they say "earth". It was not out of neglect that they don't also say "and other planets", but out of ignorance that such things even exist.

"Heavens" is everything else that exists outside of earth. Simply, there's the sky; where all the stars, moon, and sun reside; and then there's the "waters above" which is the realm of God. Most modern conceptions have an idea that Heaven is like another dimension, but the Ancients did not really have any such concept. To them, Heaven and Earth existed in the same 'ether'.

This is an image of a what they thought the universe looked like: 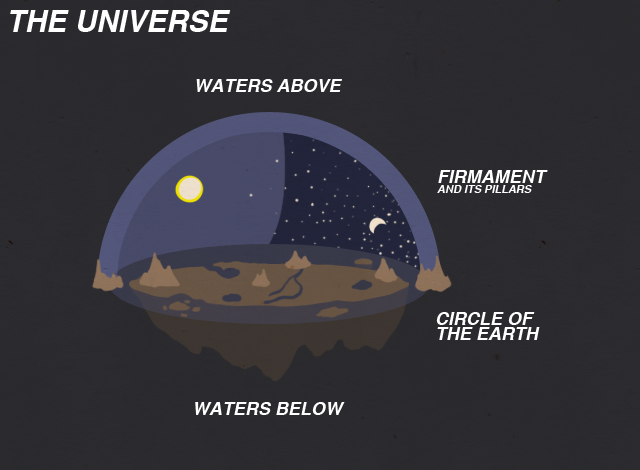 You can clearly see that the Earth exists inside a kind of bubble along with all the other celestial bodies inside a kind of sea, which is the realm of God. The ignorance of what really exists beyond our atmosphere is apparent.

With this in mind, the Ancients likely believed that there was only one earth and when they said "earth" they meant all the land under the firmament. If they suddenly learned there were other planets it would blow their minds, so we can't really know how they would respond.

If the human race evolves to such a state that we can colonize other planets. In my opinion no land will be necessary. As the humans can create living space anywhere in space. We could create our own artificial planets (mother-ships) that would hold millions of people and actual 'Earth'(planet) will not be required.

I would suggest that all living space might be called Earth.

So if they say:

the heaven means everything in the universe.

Not the answer you're looking for? Browse other questions tagged exegesis genesis revelation earth .

3
Where in the Bible does it say that God is creating a new earth?

6
Universe made of water?
3
Does the Bible say when the day of the Lord (as described in 2 Peter 3:10) will occur, and does it go into more detail about this particular event?
4
How would the four major eschatological views differ in their interpretation of Revelation 21:4?
5
Did Jesus mean that heaven and earth would actually pass away in Matthew 24:25?
0
Gates of hell lock forever. What does gates of hell mean?
2
Which day of Creation Week were the stars created?