When did the “upside down cross” become a symbol of anti-Christianity?

When did the "upside down cross" become a symbol of anti-Christianity? I can find no mention of it in the Bible. However there is, in Christian history, the story of Peter's execution – which really isn't a sign of anti-Christianity but the admiration he had for Jesus. Is there a line in the sand date when this became an anti-Christian symbol?

Eugène Vintras (1807–1875) may be the first to use the inverted cross in a distinctly anti-Christian way. He was a Gnostic revivalist operating in France during the middle of the 19th century. He preached the end of the age, and claimed to have received messages from Michael the Archangel and that he himself was a reincarnation of Elijah. He was condemned by the Vatican, and subsequently began using an upside-down cross:

Vintras, following further attacks from the Church, adopted the inverted cross as the symbol of the new dispensation of which he was the prophet, inverted because the Reign of the Suffering Christ had been superseded by the Reign of the Holy Spirit of Love.1 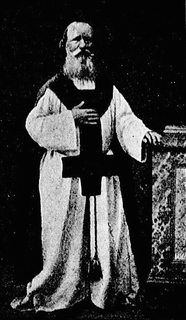 The practices of Vintras's followers were even more bizarre, and the symbol thereafter began to be associated with the occult more generally, such as in a 1891 novel, Là-bas:

His costume was a long robe of vermilion cashmere caught up at the waist by a red and white sash. Above this robe he had a white mantle of the same stuff, cut, over the chest, in the form of a cross upside down.3

It's also used in a 1903 depiction of 17th century occultist Étienne Guibourg (link is possibly an occasion for sin). In the (cropped) image below, he is shown wearing an upside-down cross as he performs a Black Mass during the Affair of the Poisons: 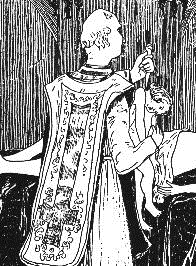 I haven't found any indication that Guibourg actually wore an inverted cross, but rather that he was only depicted that way once Vintras's use of it became associated with occultism more generally.

If one includes Gnosticism within Christianity, then perhaps Vintras's use of the inverted cross would not be considered "anti-Christian." However, at the very least, his use of it and his perceived involvement with the occult caused the symbol to become generally associated with Satanism by the end of the 19th century.

Most of this is from memory going back a few years and really is nothing more than my thoughts from having looked into it some time ago.

Not the answer you're looking for? Browse other questions tagged church-history symbolism origin cross non-christians or ask your own question.

8
Did all Popes use the inverted cross?

24
How did the cross come to be a symbol for Christianity?
18
What is the reason for the absence of the Cross as a symbol in the LDS Church?
3
Why are many protestants hesitant of the reappropriation of symbols?
3
Request: Christian demographic statistics at the time of the reformation
2
To the Protestant, what is the benefit of putting a cross inside the church?
8
What evidence exists to support church traditions regarding the deaths of the following apostles?
3
What kind of movement or denomination in Christianity made being a Christian a personal/individual choice?