I think any Christian will agree that real-life miracles happened at the time of the Old and New Testament. I've also heard that modern day miracles are more common in developing countries than they are in western cultures. But in these places, verifiable evidence is usually much harder to come by.

What evidence exists for miracles that occurred after the Bible was written?

I'm interested in miracles on par with those performed in the Bible, especially the New Testament--changing water into wine, healing of the obviously and terminally ill, feeding of the 5,000, someone being raised from the dead, walking on water, etc.

I'm not interested in stories of the healing of a fever, or finding $20 "just in time", etc. These may well be miracles, but they're easily debatable, so I'm more interested in obvious miracles.

I see miracles all the time. there's a secret though: "Without faith it is impossible to please God, for those who come to God must believe that HE is, and that He is a rewarder of those who diligently seek Him." - Hebrews 11:6. Allot of people seem to think that faith is just believing God exists, and aren't quit sure that He will actually reward them for seeking Him, they think things like He'll only reward you if it's His will at the time. But having faith is defined as believing God will reward you for seeking Him.

Some of the miracles I have personally seen:

The mother of one of my classmates has seen a small pot of spaghetti multiplied to feed many hundreds of people on several occasions in Africa, when they didn't have enough to feed the people they were ministering to.

People who travel to 3rd world countries do tend to see more miracles than they do in the states mainly because people tend to be more hungry for supernatural activity there. There is usually a lot of blatant demonic activity in those countries so people are used to the supernatural. In the west there is hardly any demonic activity comparatively because the enemies strategy is to make people think he doesn't exist. and there are many churches in the west that claim God stopped doing miracles because we have the Bible, so we don't need them anymore. They think this is faith, just believing what the bible said happened and not needing any proof. Miracles aren't about needing proof, Miracles are about God demonstrating His extravagant love. That's why when Jesus was walking around doing mighty works, he didn't do them for the pharisees. The pharisees were questioning Jesus identity as the Son of God, when they said show us a sign, Jesus had been showing signs all along by healing people, but the pharisees where asking him to prove He was God. So Jesus didn't indulge there unbelief. I see it all the time, God will allow someone demonstrating unbelief to be completely blind to something that really can't be argued with. So in closing, To me this is all about Hebrews 11:6. Faith is not just believing what God said, without any tangible proof(but that is a requirement), it's believing that God will reward you for seeking Him, if you don't meet both requirements, it's not pleasing to him. That doesn’t mean your damned for it, it just means your not fully trusting Him.

"Evidence" is a difficult word to work with in this context. It implies scientific evidence, which requires independent reproducibility and verifiability, and if you had that, it wouldn't really be a miracle.

However, you mentioned feeding the 5000, and that reminds me of something I read several years ago. A preacher's wife wrote about an experience that she had one time. Her family lived on a mountain, near a ski resort. It was Thanksgiving when a huge snowstorm rolled in and stranded a bunch of people on the mountain. They understood it as their Christian duty to take in people who couldn't get home and give them shelter for the night.

They had a Thanksgiving day feast prepared, and they shared their food freely. But they had only made enough for their own small family. Nonetheless, all the refugees (she said it was a few dozen, if I recall correctly) ate their fill and there was somehow enough for everyone.

These sorts of things still happen today, but not in the sort of patterns that leave easily-examinable "evidence". Rather, the Lord gives us what we need when we truly need it.

The Miracle of the Sun at Fatima in Portugal is a good example. The Sun danced around and plummeted toward earth in front of 70,000 people.

Benjamin Dehkurdi broke his neck falling from a trampoline on May 23, 2005. On the way to the hospital, as Benjamin's father followed behind the ambulance to Langley Memorial Hospital in British Columbia, he phoned their pastor and they prayed together. When the extent of Benjamin's injuries was discovered he was transferred to Vancouver's Children's Hospital.

A photograph of the May 23rd x-ray showing what is known as a "Jefferson Fracture" is shown below. 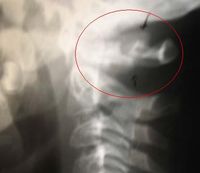 The following day, May 24th, a CT scan was taken. In contrast to the previous day, it showed no break or fracture. Benjamin was discharged from the hospital with a normal spine, as indicated by the medical report. 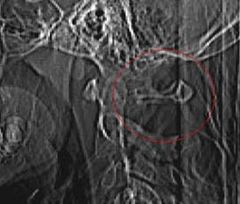 William David Upshaw was born on October 15, 1866, near Atlanta, Georgia. He served in Congress during the late 1910's and throughout the 1920's, and ran for the office of the President for the Prohibition Party in 1932. 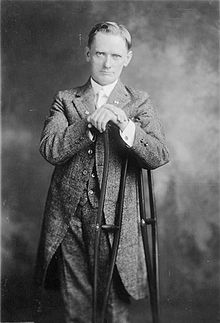 When he was 18 years old he fell onto the crosspiece of a wagon frame and fractured his spine. He spent 7 years in bed, and was a cripple until the age of 66, when he could stand for only minutes at a time. At the age of 66 he was miraculously healed in a healing campaign and was able to walk perfectly for the rest of his life.

Shortly before his death at age 86, William Upshaw published his testimony in a tract which he sent to every Senator and member of the House of Representatives, as well as President Truman, Winston Churchill, King George, and Joseph Stalin.

The abortive Communist attempt to make the gates of Hell prevail against the Orthodox Church in Eastern Europe bled many martyrs and tortured many confessors, and subsequently many miracles have turned up. The books on Father Arseny follow an exemplary zek, and the miraculous comes to the fore every now and then. For instance, Fr. Arseny and a friend survived a night in deadly cold weather through a miraculous divine liturgy. The still incorrupt relics of saints also may constitute miracles for you, as well as the Holy Fire at Christ's Tomb. There was a recent saint in Alaska---not formally venerated yet, but the locals regard it as only a matter of time before Matushka Olga will be formally canonized. At least one person has had dreams of Mat. Olga treating her for illness, having never known of her beforehand. The real miracle in each of these stories, however, is the transformative power God manifested in them for bringing others closer to God, and their own personal holiness as well. For instance, if I remember correctly, Mat. Olga bore twelve children, and never rose her voice. Think about that. That is scary holy. Also, Fr. Dan Skvir of the Chapel of the Transfiguration at Princeton is married to (I think) the granddaughter of a miracle-worker. A blind woman came to Paschal liturgy, and upon communion regained her sight.

Of course God has seen fit to bless those outside the Orthodox Church with miracles. Princeton Faith & Action (the Princeton branch of Christian Union) has borne witness to miracles. Ask Mike Vincent about the time he fasted and saw a vision of light. Also ask the Knapkes about their visit to Fiji, and the healed land, specifically the river anomaly. Mike Vincent also has miracle stories originating from a Christian summer camp somewhere in California, I think.

I've also wondered about this. I feel like Miracles somewhat defy the idea of evidence, as Miracles seem to cease to be Miraculous if once you can completely explain how they happened.

As far as I know, most witnesses of miracles will document what they've seen, and give a witness of it if it's happened. This was similar to how Miracles were proven in during Christ's ministry. You either believed it or you didn't.

... In the mouth of two or three witnesses shall every word be established. 2 Corinthians 13:1 KJV

I think of this quote applying not only to the word of God, but the word of the testimony of others. Multiple witnesses are usually the best thing we've got. It works the same way in the scientific world. You publish some findings, and you have some witnesses of those findings being true. With the scientific evidence you can repeat the process, and get the same results.

Miracles are a little different, as you aren't going to have the same results just doing the same things. Miracles have a lot to do with our own Faith in miracles. The conditions to make a Miracle happen follow a different system of laws than the more easily verifiable scientific laws of Chemistry, Biology, and Physics.

In the cases of people coming back to life or being healed, I suppose someone could take a measure of the condition of the person before and after, and come up with some way to prove that it was the same person. In those cases it's difficult to explain what happened because mankind still knows so little about how/why the human body really works (It's far more complex then the microchips we create that contain billions of transistors).

I really think if you're searching for evidence, but don't believe you'll find it, you may find it, but not realize it's evidence. If you truly believe in miracles, and have faith in Christ, you'll probably be a witness of them, but being a witness is evidence for you, not usually for anyone else.

How about living testimony Benny Prasad?

He was in wrong medication for Asthma from young age, because of which his 60 % lung and immune system damaged. Medically he cannot achieve whatever he has achieved.

World record holder for the fastest person to Travel to 245 nations in 6 years, 6 months , great musician and inventor of Bentar

Not the answer you're looking for? Browse other questions tagged miracles or ask your own question.

9
Are there any documented instances of anyone moving a mountain in faith?
14
Effectiveness of prayers of intercession
6
How to define an independent interference by God?
4
What are some situations documented outside of the Bible in which God intervened in human affairs?