What is a faithful translation for "the son of perdition" in John 17:12?

In John 17, Jesus prays and says of his disciples,

12 While I was with them, I was keeping them in Your name which You have given me; and I guarded them and not one of them perished but the son of perdition, so that the Scripture would be fulfilled.

That was the New American Standard Bible. The phrase there is a literal translation from the Greek, "ὁ υἱὸς τῆς ἀπωλείας"; "the son of X" is an idiom for "one who personifies the nature of X", and "ἀπωλείας" (Strong 684) can mean "perdition", "loss", "destruction", "ruin", and so on.

Translations differ in how they render this reference to Judas (though they often have a footnote saying that "son of perdition" is the word-for-word equivalent). Examples:

It seems to me that there are differences in how much agency is assigned to Judas here. If he is "doomed to destruction" or "destined to be lost" then he is being painted as a victim of fate. If he is "the one who chose to be lost" or "the son of perdition/destruction", then he could be a more active participant in his own downfall. The "son of perdition/destruction" seems like an obvious translation, but it's not clear to me whether (in Greek or English) it should connote that he is a destroyer, or the one who is destroyed, or both.

Do these English translations faithfully express the meaning of "son of perdition" in Greek? Related to that, is there any real doctrinal difference between the phrases above? 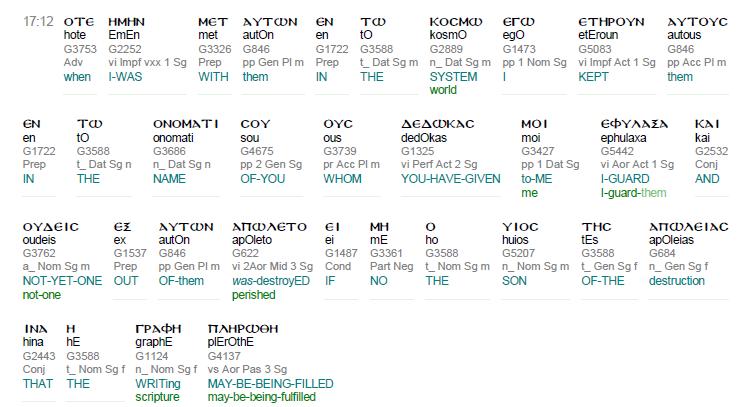 "houis"
The Strongs number for this is G5207. Looking at the Vines entry, this definitely means "son". This can mean both "male offspring" or, more generically, "descendant".

The literal translation of this phrase would be "son of destruction" or "son of ruin". The choice of using the word "perdition" is acceptable in the old form of the word ("utter destruction"), however it has taken on the connotation of "eternal damnation" and so it's no longer an appropriate translation, in my opinion.

If we look at what Jesus is saying here, he's saying that he saved and protected all of his disciples except for Judas. He refers to Judas as the "son of perdition" saying that he was the only one who he did not protect.

If we look at this in light of Luke, we find this verse:

Luke 22:3 (NIV)
Then Satan entered Judas, called Iscariot, one of the Twelve.

Here, we see that Satan entered Judas. After that point (in John 17), Jesus calls Judas the "son of destruction". What he's referring to here is clearly that Judas was of Satan and not of God.

The problem with looking at things too closely is that we often lose sight of the bigger picture. The question being asked was, essentially, was Judas a product of circunstances or did he play an active role in betraying Jesus. If we read further in Luke we see this passage:

Luke 22:4-6 (NIV) Emphasis added
4 And Judas went to the chief priests and the officers of the temple guard and discussed with them how he might betray Jesus. 5 They were delighted and agreed to give him money. 6 He consented, and watched for an opportunity to hand Jesus over to them when no crowd was present.

Clearly, there was plotting involved, a conscious effort to betray Jesus, and a choice that Judas made. While, yes, he was a "son of destruction" this was due to his actions and his choices.

Jesus allowed Judas to be tempted--he withdrew his protection from Judas so that Satan could enter into his heart--and Judas chose to turn away from God and from Jesus.

Jesus was protecting the apostles from being tempted by Satan. With Judas, he withdrew that protection so that Satan could enter into his heart and tempt him. With that temptation, Judas was allowed to choose to betray Jesus--which he did.

Judas intentionally plotted against Jesus and consented to the betrayal. Therefore was fully guilty of the betrayal.

The main doctrinal difference between the various interpretations is the one already mentioned: the question of free will. I think some perspective on the matter can be found in Luke:

1 Then said he unto the disciples, It is impossible but that offences will come: but woe unto him, through whom they come!

(See also Matthew 18: 7.) This is a warning: even though it's inevitable that "offenses" will happen, do not be the offender! It was necessary that one of the Apostles would become a Son of Perdition and betray Jesus, and it's likely that the Pharisees would have accepted (and even tried to solicit) help from several of the members of their hated rival's inner circle, but Judas was the one who accepted the job.

Given that, it looks like the closest translation into plain English is the one given by the Jerusalem Bible.

Not the answer you're looking for? Browse other questions tagged translation gospel-of-john judas-iscariot .

15
Is there any evidence for the claim that the Catholic church suppressed translation of Scripture?
4
Was Pilate also the father of the son who was healed by Jesus in John 4?
19
What support is there for the Jehovah’s Witness translation of John 1:1?
2
How do Bible scholars reconcile the differences between Greek and Aramaic in John 21:15-17?
7
Is there an Arabic translation of the Book of Mormon?
1
What is the translation methodology for the Nueva Versión Internacional (NVI)?
8
The Mormon Church teaches that Joseph Smith saw God the Father and His Son. How do you reconcile this when the Bible says the Father cannot be seen?