Do JW teach that Luke 23:43 was corrupted? On what basis?

If I recall correctly, in a past conversation with some Jehovah Witnesses, to prove that there is no life after death, I gathered from them that these words of the LORD on the cross in Luke 23:43 (RSVCE):

were at a certain time corrupted and originally, the promise of the LORD read as below:

Meaning that the good thief would be with the LORD not that Good Friday, but sometime in the future, perhaps at the resurrection of the just.

If it is true the JW teach and witness to this, what is the basis of their claim that the current rendering of the LORD's words is a corruption?

As one who formerly (in ignorance) used to promote the same argument (not being a Jehovah's Witness, but somewhat associated with the Arian theology), the argument is not that the Greek text was corrupted, but rather, that the comma in the English translation should be placed after "today" rather than before it. They are able to make this argument because the original Greek manuscripts, and those for centuries thereafter, lacked any sort of punctuation as well as miniscular letters. For example, the Codex Sinaiticus is dated to the 4th century A.D. The following is the Greek text of Luke 23:43 therein: 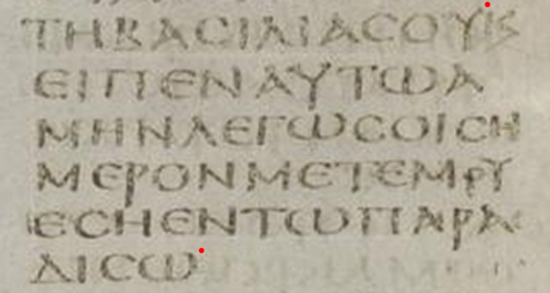 As you can see, there are no miniscular letters and, more importantly, no punctuation.

The notion that the Lord Jesus Christ did not go to Paradise (whether it be a place in heaven or in a compartment of Hades) that same day via his soul is important to Jehovah's Witnesses who believe in "soul sleep" or "mortalism." Succinctly stated, they assert that man does not have an [immortal] soul that continues to exist after the death of the body. Rather, man is a soul,(1) and as the dead are said to sleep upon their death, then the soul (man himself) also sleeps.

Death Compared With Sleep. There is evidence that people sleep in cycles. Each cycle is made up of a deep sleep followed by a lighter sleep. During periods of deep sleep it is very difficult to awaken a person. He is completely unaware of his surroundings and the things that may be occurring about him. There is no conscious activity. Similarly, the dead are “conscious of nothing at all.” (Ec 9:5, 10; Ps 146:4) Therefore death, whether that of a man or of an animal, is like sleep. (Ps 13:3; Joh 11:11-14; Ac 7:60; 1Co 7:39; 15:51; 1Th 4:13) The psalmist wrote: “From your rebuke, O God of Jacob, both the charioteer and the horse have fallen fast asleep.” (Ps 76:6; compare Isa 43:17.) Were it not for God’s purpose to awaken persons from the sleep of death, they would never wake up.

Therefore, since the soul of Jesus, i.e. himself, was dead and buried three days and nights in the grave, the Lord Jesus Christ could not have went anywhere during the interim, including Paradise. If this be the case, they reason, the comma could not logically be placed before the word "today" in the English translation. Furthermore, they assert that those modern Greek texts which place the comma between σοι and σήμερον are simply the result of scribal bias.

To summarize, Jehovah's Witnesses base their assertion on the fact that the original Greek manuscripts lacked punctuation and the placement of the comma by some scribes or translators after the Greek word σήμερον or English word "today" is simply a result of the scribe or translator's bias. Because man is a soul, and man sleeps upon his death, then the soul of our Lord Jesus Christ could not have went anywhere while he was dead for those three days and nights in the grave. This is the summary of their argument.

As you did not request a refutation thereof, I have not included one. But, in the event you edit your original question and request one, I would have no problem including one.

(1) They emphasize Gen. 2:7 for support of this assertion, which states that man became a [living] soul and not that man has a soul.

In addition to the answer of H3br3wHamm3r81, I found something interesting searching in their Watchtower Online Library :

It's a portion of their book 'Reasoning', about Paradise, commentating the verse of Luke 23:43. Here is the interesting part of this article :

When will the evildoer be in Paradise?

The Emphasised Bible translated by J. B. Rotherham agrees with the punctuation in the New World Translation. In a footnote on Luke 23:43, German Bible translator L. Reinhardt says: “The punctuation presently used [by most translators] in this verse is undoubtedly false and contradictory to the entire way of thinking of Christ and the evildoer. . . . [Christ] certainly did not understand paradise to be a subdivision of the realm of the dead, but rather the restoration of a paradise on earth.”

When would Jesus ‘get into his kingdom’ and fulfill his Father’s purpose to make the earth a paradise? The book of Revelation, written about 63 years after the statements recorded at Luke 23:42, 43 were made, indicates that these events were still in the future. (See pages 95-98, under “Dates,” also the main heading “Last Days.”)

18
Why were both criminals that were crucified with Jesus abusing him in Mark, and not in Luke?
3
What do the verses in Luke 5:20-25 teach us?
5
How do soul sleep adherents explain Lk 23:43?
6
On what basis was Jesus’ death sufficient for redemption according Non-Trinitarians who maintain that Jesus was not eternal God as God the Father is?
4
Why do Jehovah's Witnesses make the Old Testament forms of address to God ("Jehovah" and "Father") more important than "Abba?"
7
Why do Jehovah’s Witnesses cite William Barclay as to the identity of the speaker in Revelation 22:13 knowing he believed it is Jesus?