Has the Vatican issued clarification for pictures which appear to show Pope St John Paul II kissing the Qur'an?

In comments which I have come across on the internet, this picture is thought to be very scandalous as it appears to show Pope St John Paul II kissing the Qur'an. 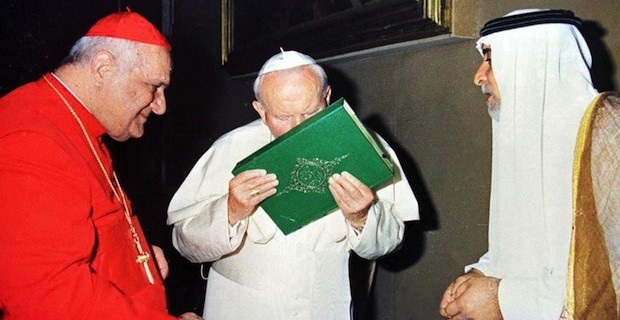 Have the Vatican issued a document to clarify the story behind the picture or explain his actions?

The book that the pope appears to be kissing looks like no Qur'an I have ever seen. The symbol on the cover is enough like that on the cover of my own copy of the Qur'an (no I am not a Muslim), but does not seem to be identifiably Islamic. The problem with identity is that the 'book' looks more like a binder or outer cover - when you zoom in, it seems to be enclosed on both edges, whereas a Qur'an is not normally presented in this way. It may be that Pope St. John Paul II was simply following traditional Arabic custom by kissing a gift presented to him, whatever was held in that binder. Nevertheless at least one website claims authenticity for the event:

The question becomes one of whether it is appropriate for the pope to show respect for members of another religion and for its holy book. The Second Vatican Council issued, in 1965, Pastoral Constitution On The Church In The Modern World. Part I, chapter II (28) states:

Respect and love ought to be extended also to those who think or act differently than we do in social, political and even religious matters. In fact, the more deeply we come to understand their ways of thinking through such courtesy and love, the more easily will we be able to enter into dialogue with them. [My emphasis]

Either way, it appears the Vatican has not seen it necessary to post an explanation of the photograph. I think we should give the pope the benefit of the doubt and believe that he acted with propriety and sensitivity to the feelings of the Catholic community he leads.

This is something I argue every few months.

Motive is the first attribute required for any validity in the accusation.

We can't tell John Paul's action or motive by the picture.

But we do know what John Paul's characteristic response to Islam. So that actually is greater than assumption by appearance in a photo.

When John Paul visited Islamic countries, and refused to agree to things to appease Islam.

These are things they said they required for his visit to enter their sacred places. John Paul went in wearing his cross, and refusing to visit and honor their sacred graves.

He refused their requirements. And that was a huge statement!

So John Paul has a baseline characteristic of himself. A guilty assumption doesn't overcome the man as he really was in all fairness.

People perceive an appearance of something is greater evidence than othee evidence such as a track record that is characteristic of the person stand.

Love believes the best. To make guilt by appearances is an injustice towards the accused.

🤷🏽‍♀️ Even if John Paul did kiss a Quran, we'd need proof that his motive was that of worship and submission to the Quran as he is widely being accused of.

Why aren't we simply assuming the best of John Paul in kissing an enemy, in the heart wrenching anguish he publically showed for persecuted Christians in Islamic nations?

So why not we judge him in light of what he has shown himself to be in this long running papacy, with alleviating human suffering as his constant papal focus, as he displayed by working with Reagan against Communism, and he won in a big way?

I think it might be a strike against us to diminish great reward by a stain of presumption.

How many "appearances of evil" can we all be judged for?

How many times have we done or said something with a good intention and motive, but turned out it wasn't the best public display of our intention??

I get that it wasn't John Paul's brightest public moment, but if you have such a standard of judgment then you need to apply that to yourself, and everyone you openly approve.

Maybe God allows things like this to test our judgments. And expose our measures.

John Paul was a Pope who worked hard like Trump. Trump makes a lot of public errors in judgment. Yet he kind of walks on water.

We excuse missteps by weighing them against good ones.

Judge matters according to the nature and quality of a person versus a moment of a person.

The more someone does, the more opportunities there are to criticize them.

Again let's be mindful of this, John Paul has a track record that shows his stand regarding Islam.

So, I have to give John Paul the benefit of doubt in the accusation because his character witness says to.

Isaiah 29:21 That make a man an offender for a word, and lay a snare for him that reproveth in the gate, and turn aside the just for a thing of nought.

Isaiah 65:5 Which say, Stand by thyself, come not near to me; for I am holier than thou. These are a smoke in my nose, a fire that burneth all the day. .

This Catholic World News article is the closest I've seen to an "official" pronouncement regarding his kissing the Koran:

5
Do Catholics really believe in contemporary miracles?
6
How novel is John Paul II's theology of the family as "ecclesia domestica"?
12
The meaning of "The Other" in the writings by pope John Paul II
0
What and where are the evidences for the Catholic Church's Apostolic Succession?
8
Does Pope Francis' rewording on the subject of capital punishment in the Catechism trump those of Pope John Paul II's encyclical Evangelium vitae?
5
What is the meaning behind this coin of Pope St. John Paul II?
3
Are there any individuals who are claiming to be the pope that are not Pope Francis?
3
What encyclical upheld God's sovereignty over the regularity of natural laws?