In Catholic Church History, when, why and by whom did the four living creatures become associated with the four evangelists?

In the Catholic Church history, when, why, and by whom did the four living creatures become associated with the four evangelists? 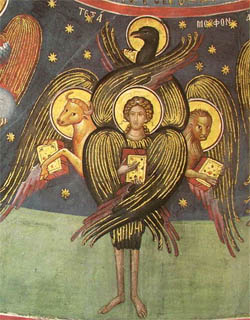 And what is the reasoning behind this association:

The second century church father Irenaeus was probably the first.

Against Heresies: Book III Chapter XI-Proofs in Continuation, Extracted from St. John's Gospel. The Gospels are Four in Number, Neither More Nor Less. Mystic Reasons for This.

Cherubim represented the seasons in other Ancient Near Eastern symbolism.

From this passage is derived the familiar symbolism of the four Evangelists; Mark seated on a lion, Luke on a steer, Matthew on a man, and John on an eagle.16

Here is the reasoning of Victorinus in his commentary on the Apocalypse. I think he is the first to match the order you give.

“And round about the throne were four living creatures.”] The four living creatures are the four Gospels.
7–10. “The first living creature was like to a lion, and the second was like to a calf, and the third had a face like to a man, and the fourth was like to a flying eagle; and they had six wings, and round about and within they were full of eyes; and they had no rest, saying, Holy, holy, holy, Lord Omnipotent. And the four and twenty elders, falling down before the throne, adored God.”] The four and twenty elders are the twenty-four books of the prophets and of the law, which give testimonies of the judgment. Moreover, also, they are the twenty-four fathers—twelve apostles and twelve patriarchs. And in that the living creatures are different in appearance, this is the reason: the living creature like to a lion designates Mark, in whom is heard the voice of the lion roaring in the desert. And in the figure of a man, Matthew strives to declare to us the genealogy of Mary, from whom Christ took flesh. Therefore, in enumerating from Abraham to David, and thence to Joseph, he spoke of Him as if of a man: therefore his announcement sets forth the image of a man. Luke, in narrating the priesthood of Zacharias as he offers a sacrifice for the people, and the angel that appears to him with respect of the priesthood, and the victim in the same description bore the likeness of a calf. John the evangelist, like to an eagle hastening on uplifted wings to greater heights, argues about the Word of God. Mark, therefore, as an evangelist thus beginning, “The beginning of the Gospel of Jesus Christ, as it is written in Isaiah the prophet;”[Mark i. 3. ] The voice of one crying in the wilderness,” [Isa. xl. 3. ] —has the effigy of a lion. And Matthew, “The book of the generation of Jesus Christ, the son of David, the son of Abraham:” [ Matt. i. 1. ] this is the form of a man. But Luke said, “There was a priest, by name Zachariah, of the course of Abia, and his wife was of the daughters of Aaron:” [ Luke i. 5. ] this is the likeness of a calf. But John, when he begins, “In the beginning was the Word, and the Word was with God, and the Word was God,” [ John i. 1. ] sets forth the likeness of a flying eagle. Moreover, not only do the evangelists express their four similitudes in their respective openings of the Gospels, but also the Word itself of God the Father Omnipotent, which is His Son our Lord Jesus Christ, bears the same likeness in the time of His advent. When He preaches to us, He is, as it were, a lion and a lion’s whelp. And when for man’s salvation He was made man to overcome death, and to set all men free, and that He offered Himself a victim to the Father on our behalf, He was called a calf. And that He overcame death and ascended into the heavens, extending His wings and protecting His people, He was named a flying eagle. Therefore these announcements, although they are four, yet are one, because it proceeded from one mouth. Even as the river in paradise, although it is one, was divided into four heads. Moreover, that for the announcement of the New Testament those living creatures had eyes within and without, shows the spiritual providence which both looks into the secrets of the heart, and beholds the things which are coming after that are within and without.

The Catholic Encyclopedia article "Symbolism" says claims they were prominent in "the art of the early Middle Ages":

For the Evangelists there have been used from very early times certain conventional emblems — a winged man or an angel for St. Matthew, a winged lion for St. Mark, a winged calf for St. Luke, and an eagle for St. John. All these are taken from the description of the heavenly liturgy in Apocalypse 4 and 5 must have been suggested by the vision of Ezechiel (Ezekiel 1:10). In the art of the early Middle Ages these emblems play a very prominent part.

5
The four living creatures and twenty-four elders in Revelation?
11
When did Peter become the first Pope, according to Roman Catholic doctrine?
7
When and why did the Catholic Church first start issuing annulments?
7
When and why did the Catholic Church stop the Crusades?
6
According to Catholic Church tradition, where, when, how and by whom did the devotion of the Stations of the Cross begin?
11
How did the four living creatures become associated with the Gospel writers?
2
According to the Catholic Church, did Jesus fulfil the prophesy of Isaiah by being buried in a tomb hewn in rock?
18
What is the origin of the idea that Matthew, Mark, and Luke didn't mention Lazarus in order to protect him?
0
Why do the Evangelists Matthew, Mark and John not give narrative account of the Ascension?
4
When was the "Evangelist" title first applied to the Gospel authors?