Jesus said no one had gone into heaven except the Son of Man, but what about Elijah?

I've found two verses which seem to be contradictory, so I'm hoping someone can explain how they can be reconciled.

No one has ever gone into heaven except the one who came from heaven--the Son of Man. (John 3:13, NIV)

As they were walking along and talking together, suddenly a chariot of fire and horses of fire appeared and separated the two of them, and Elijah went up to heaven in a whirlwind. (2 Kings 2:11, NIV)

Jesus was well-versed in the Old Testament, so why would he say what he did in John 3:13?

Is it possible that this was just a nasty tornado and Elijah was just not to be found (or elaborate metaphor for a "whirlwind" of an attack, ripping up dust like fire, from enemies and he was killed or kidnapped and killed)?

Note that the NLT adds "and returned":

No one has ever gone to heaven and returned. But the Son of Man has come down from heaven. (John 3:13, NLT)

But I don't know warranted this addition is, as no other translations have it.

which may be translated as,

13 And no one ascended into heaven except he who descended out of heaven, the Son of man who is in heaven.

There are some who believe that Jesus is speaking in John 3:13. Others believe that the author of the fourth gospel (who many assume to be a certain “John”) is speaking. However, identifying the speaker is not essential for the purpose of this discourse. Rather, we shall focus on the issue of the Lord Jesus Christ being the only one to ascend to heaven.

Those familiar with the Old Testament know that both Elijah the prophet and Enoch ascended to heaven before dying. Yet, John 3:13 states that no man ascended to heaven but the Son of Man, the Lord Jesus Christ. How, then, do we reconcile this supposed contradiction?

The Lord Jesus Christ ascended (ἀνέβη) to heaven and descended (κατέβη) out of heaven under his own power and volition. On the other hand, individuals such as Enoch and Elijah were taken or brought up to heaven by God.

24 And Enoch walked with God, and he was not, for God took him.

Enoch, being a man, could not and did not ascend under his own power and volition. Rather, God took him into heaven.

1 And it came to pass, when Yahveh caused Elijah to ascend to heaven in a whirlwind, that Elijah and Elisha went from Gilgal.

The infinitive הַעֲלוֹת (haʿalot) is conjugated in binyan Hifʿil, and thus means “to cause to ascend (go up).”

The Hebrew text literally states that Yahveh caused Elijah to ascend to heaven, or in more polished English, Yahveh brought/ took Elijah up into heaven. Like Enoch, Elijah could not and did not ascend under his own power and volition.

Thus we see that in both cases of Elijah and Enoch, these individuals were taken up into heaven by God and not under their own power or volition. On the contrary, the Lord Jesus Christ descended2 from heaven (upon his incarnation) and then later ascended to heaven (after his resurrection) under his own power and volition.

1 p. 631
2 Furthermore, no mere man has ever descended from heaven. This is conclusive evidence of the supernatural nature (i.e., deity) of the Lord Jesus Christ.

You don't need to worry about the NLT translation adding "and returned" toward the beginning of John 3:13. To help show this, I will include a literal word for word translation of each Greek word into English. This is not a literal translation of the entire sentence, which might involve restructuring it, this is taking the Greek text and translating each individual Greek word into English words without restructuring the sentence. This comes from The Kingdom Interlinear Translation of the Greek Scriptures. It also shows the Greek words just below the English ones. It is a very accurate translation when you want that type of translation. It has even been known to be the book a professor, Jason BeDuhn, used (uses?) for his classes. So all the students in the class used that book since he considered it the most accurate of its' type. He is an expert of Koine Greek. Of course that doesn't completely prove anything, and I don't agree with all of his beliefs about translation, but it does add to the case of this being a trustworthy translation.

The 1998, February 1 issue of The Watchtower quotes Dr. Jason BeDuhn (he is not one of Jehovah's Witnesses) as saying about that translation "..it is the best interlinear New Testament available.. (its') English rendering is accurate and consistent to an extreme that forces the reader to come to terms with the linguistic, cultural, and conceptual gaps between the Greek-speaking world and our own." 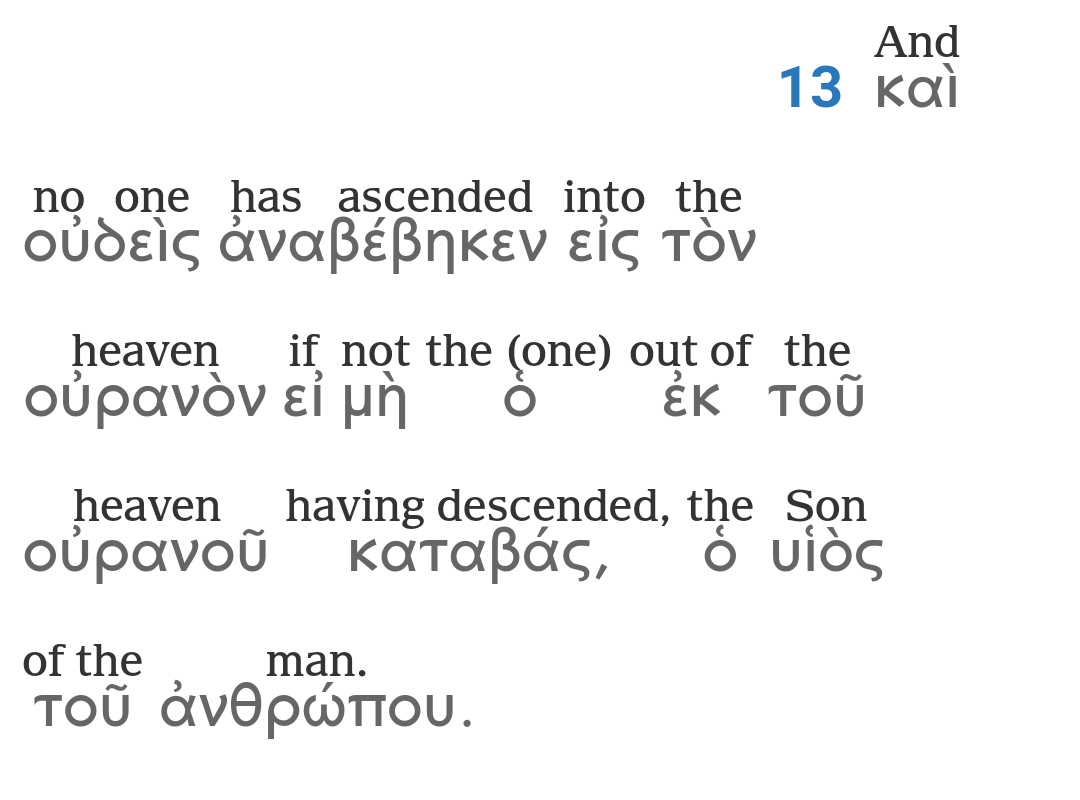 As you can see, it only talks about descending from heaven in reference to Jesus having come from there, and not as part of the opening statement about how no one else has ascended to heaven.

The Bible contains expressions of various meaning that can be translated as "heaven" or "heavens". Here is some detailed information on the topic of Heaven. In the account about Elijah, the heavens meant the atmospheric heavens in which windstorms occur, not the spiritual heavens. Jesus own words show this, as he clearly stated that no one had ascended to heaven. Acts 2:34 even indicates that David did not go to heaven. The primary hope held out in the Scriptures for the majority of God fearing people, is not one of heavenly life as an angel, but of everlasting life on the earth as humans, after it is cleaned of all wickedness and corruption. See What Is the Good News?, What Is the Resurrection? for more details on this.

Moving now to Enoch and Elijah, I will answer according to Catholic doctrine.

It is de fide that no human soul, much less a whole human person, enjoyed the Beatific Vision before Jesus died on the cross (with the exception of Jesus Himself, Who enjoyed it in his soul from the moment of his conception).

Therefore, at the time when Jesus spoke to Nicodemus, no whole human person or disembodied human soul had ascended to heaven (1), either by being taken up into heaven by God or by their own power or volition. Only "the only begotten God, the One Who Is in the bosom of the Father" (Jn 1:18) from all eternity, "Who descended from heaven" (Jn 3:13) when He assumed a human nature, was in heaven, both as God and, in his soul enjoying the Beatific Vision, as man.

Not the answer you're looking for? Browse other questions tagged heaven gospel-of-john textual-discrepancies elijah 2-kings or ask your own question.

2
Why is the Gospel of John said to present Jesus distinctively as "the Son of God"?
3
What would the Jews of Jesus' time have known about heaven?
5
In what way is the Son of God "one with the Father"?
0
The word "ascended" and what does it mean "No one has ascended into heaven" in John 3:13?
7
If only those who died after Jesus death are among the ones that go to heaven, how do JWs view the ascension of Elijah?
4
What was the concept of heaven people had before the death of Jesus?
3
As a young Jew what would Jesus have been taught about heaven and hell?
2
Has any Christian (group) attempted to compile a list of personages, which are Biblically stated to be (eventually) in heaven?