What is the decree that Pope Gregory IX issued in 1231?

I came across this in an article about the inquisition:

In 1231, Pope Gregory IX published a decree which called for life imprisonment with salutary penance for the heretic who had confessed and repented and capital punishment for those who persisted. The secular authorities were to carry out the execution.
The Inquisition - The Galileo Project

I've searched in a number of places and the closest I've gotten is Parens scientiarum, which is referenced in the Wikipedia article on Pope Gregory IX, but the short description on Wikipedia doesn't sound like the same thing and I cannot find the text of this incipit. Searching for the text of the above quote shows that many people are copying from a single source, but I cannot find that either.

It may be incorrect information. Pope Gregory had other bulls (assuming this referenced "decree" is a bull). It might be Ille humani generis of 1232 or Licet ad capiendos of 1233, but I cannot find anything on those either.

I want to read the text of this "decree". So that is my question: What is this "decree" and where can I read its original text (in English)?

I believe that I have the text you need, more or less at any rate.

In February, 1231 ... the pope enacted a law for Rome that heretics condemned by an ecclesiastical court should be delivered to the secular power to receive their "due punishment". This "due punishment" was death by fire for the obstinate and imprisonment for life for the penitent.

I've added the emphasis to demonstrate that the pope did not intend this to be the case universally, but simply as a law for the area controlled by the diocese of Rome.

After some research, I've found the original text in Latin. The passage in question begins with the phrase "Excommunicamus et anathematizamus" and ends with "irritum et inane". 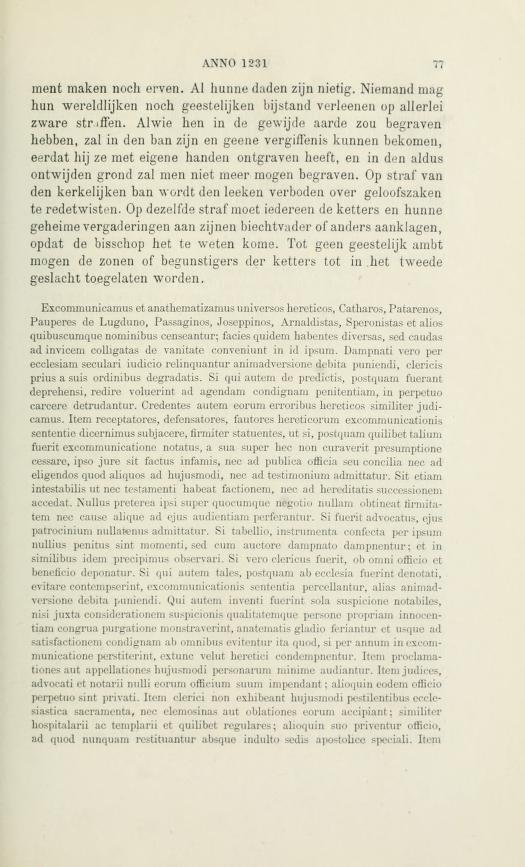 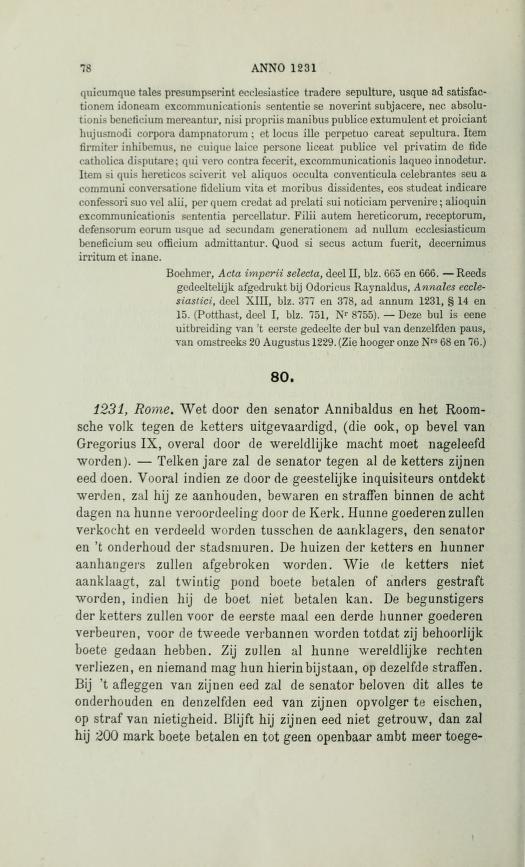 Here is my (own) translation of the document, to the extent that my Latin allows it:

We excommunicate and anathematize all heretics, Cathars, Patarenes, Poor Ones of Lyons, Passagines, Joseppines, Arnaldists, Speronists and others by whatever name they are known1; indeed their appearances are different, but they agree in the fact of their falsity, with their tails tied to each other. (?) Those who are condemned by the church, indeed, ought to be left to secular law and punished with the punishment they owe; clerics should first of all be removed from their orders. If however those from the aforesaid [groups], after they were detected, wish to return to fulfill a suitable penance, they should be cast into prison forever (?). We pass judgment on those believing in heretics or their errors similarly.

In the same way, we have recognized those who conceal, defend, or honor heretics as subject to the sentence of excommunication, holding firm, so that if anyone at all has been marked out by excommunication, he will not exercise care over anyone in his stubborn errors. By the law itself may he become disreputable; nor may he be admitted to public offices, nor to councils, nor to choosing anyone for such things, nor as a witness in court. Indeed let him be intestate, so that he may not have the right of making a will, nor may he accede to hereditary succession. None of these people may receive any power for any business reason at all; nor may any be permitted legal hearing of any cause whatsoever. If [the heretic] has been a lawyer, he absolutely may not be admitted to his clients. If a scribe, his completed documents are by that fact [the fact of his excommunication] made of no legal weight, but are condemned as their author is condemned; and in similar circumstances we command the same sort of thing to be observed. And further, if [the heretic] has been in clerical orders, he is to be removed from every office and benefice. If however any of these sorts of people, after they have been pointed out by the church, do not fear to avoid [that is, perhaps, "do not fear to avoid such a sentence" - but the Latin is not clear to me here], let them be struck down by sentence of excommunication, and of punishment with other penalties, as appropriate.

On the other hand, those who are found to be infamous only on suspicion (unless following consideration of the suspicion as well as the quality of the person, they demonstrate their innocence by a fitting penance), shall be struck with the sword of anathema, and are to be shunned by all until they make appropriate satisfaction. This shall continue until, if they have persisted in their excommunication for a year, from then on they are to be condemned [as] heretics. Thus, legal declarations and appeals of this sort of person are not to be heard.

In the same way, none of them may exercise the office of judges, advocates, and notaries; let them be deprived of any other such position perpetually. Again, do not offer the Church's sacraments to pests of this sort, nor may they accept alms and offerings; similarly with hospitallers and templars and members of a religious chapter: let them be deprived of their official status of any sort, to which they can never be restored except by special permission of the Apostolic See [i.e. the Pope]. As well, whoever presumes to hand over [the bodies of] such people for a Church burial, until they acknowledge that they lie under an appropriate penalty of the sentence of excommunication, [the sense of this is unclear] they shall not merit the benefit of absolution, unless they publicly dig the grave with their own hands, and throw in the bodies of these sorts of condemned people. And that place shall forever lack a burial. [I.e. no one else shall ever be buried there.]

Furthermore, we strongly set down as a rule, that it is not permitted to debate the Catholic faith with any lay person at all, either publicly or privately; and whoever does otherwise, let him be held in the chains of excommunication.

Next: if someone who knows heretics, or any others who hold secret meetings, or who are at variance with the common practice of the faithful in life or in habits, let him take care to point [these people] out to his confessor or to someone else, through whom he can be reasonably sure that [the matter] will be brought to the notice of the bishop; otherwise let him be punished with the sentence of excommunication.

Now the descendants of heretics, or those who shield or defend them, may not be admitted to ecclesiastical office until the second generation [i.e. the children may not hold such offices, but the grandchildren may].

Whatever is enacted to the contrary, we declare null and void.

1These are names of various heresies which were apparently prevalent in Rome in the early 13th century.

Not the answer you're looking for? Browse other questions tagged history or ask your own question.

2
Is it true the term 'pontifex maximus' was the name of the high priest of the Roman Cult of Emperor Worship, before being adopted by the Pope?
14
What is the purpose and basis for the special garments issued to temple-going Mormons?
11
Why did the conclave elect Pope Stephen I, when he died prior to taking office?
7
Did the pope choose sides between the Allies and the Axis in World War 2?
13
What is the nature of the theory for Pope Joan and the evidence that substantiates it?
2
What is the case against Gore Vidal's view that St. Paul "invented Christianity"?
4
What are the duties of a Pope? Can a pope be "good" or "bad" in this perspective?
2
How did Pope Urban II justify the first Crusade?