When and why were stained glass windows first incorporated into the design of a Christian place of worship?

Many Christian churches incorporate stained glass windows into their design. 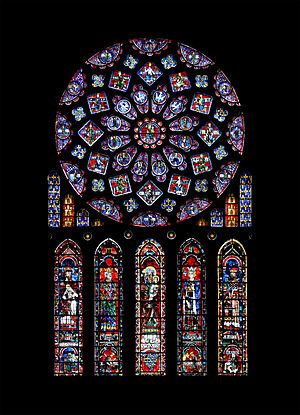 Some members have noted that the use of stained glass windows in architectural design pre-dates Christianity. That being said, I'm more concerned with their incorporation into Christian architecture, which I assume would have been done first by Orthodox Christianity or Roman Catholicism.

Stained glass windows come enlight any window, any house, so it's naturally that Christians use them for churches.

First Christian churches had not stained glass windows... It's only at the beginning of roman art that we see stained glass in the churches. And it's really simple stained glass (like stained glass we can find in cisterciens convent) Then, when Gothic flamboyant art appears, we see appear wonderful and extraordinary stained glass (Sainte Chapelle or Chartres Cathedral for instance)

It's indeed at Gothic art period (XIII-XIV century) that the technic of stained glass is the higher. Glassmakers had very high technic, which has unfortunately almost entirely disappeared today.

So, why stained glass windows in churches? Because it enlights the church, and contribute to make it more beautiful.

Architecturally, Gothic churches required large trusses in order to support the ceiling. This would make the buildings very dark. That said, the spaces between the trusses could be turned into windows in order to lighten the area.

Since the 400s, Mosaics had already been used both as art and as teaching tools. (See Ravenna for some of the best!) Combining the need for light with the established tradition of mosaics would have been a natural technological progression.

I am not sure that the comment about Gothic churches is correct. The ceilings of Gothic churches were usually ribbed vaults, above which there may have been trusses to create planar surfaces to support roof tiles. Ceilings did not usually incorporate windows or skylights, unless they were domes or squinches. Windows were formed in vertical elements such as walls and drums.

Whereas walls in the earlier Romanesque architecture were massive in order to confer adequate structural stability by counteracting the lateral thrust of the rounded arch roof vault by gravity alone, and therefore could not accommodate large window openings which would entail a significant loss in weight, the invention of the column, buttress and infill wall construction in Gothic architecture meant that the weight of the wall was no longer a constraint, and a window could be made as large as could be accommodated between primary structural members

In some countries windows this large would have let too much light and heat into the interior, where a dark ambience was considered more holy and conducive to prayer. Therefore stained glass windows would have a been a good technical solution to the problem of producing large windows that didn't let in too much light. Given the availability of the technology, it would have been but a small step for the creativity of man to come up with the idea of using stained glass of different colours to create religious images of such beauty that they could express and reinforce the congregation's love and awe for their faith, while depicting important Bible personages and scenes for their edification.

Stained glass windows have some things in common with mosaics, but are composed of much larger elements and need to satisfy structural requirements like adequate wind resistance. So although prototypes probably go back into the mists of antiquity, the art and technology of stained glass windows reached its apogee in the era of Gothic architecture.

In answer to the specific questions, Gothic architecture was developed in lands where at the time there were no denominations of Christianity apart from Catholicism. The main centres of the development were France, England, and German-speaking lands. Following the Protestant Reformation there may have been greater usage in lands were Gothic architecture was preferred, namely in northern Europe, where Protestantism had to a large extent displaced Catholicism. As far as I know, there is no obligation to incorporate stained glass windows in church architecture. Stained glass windows are a decorative and artistic choice. There may be some Protestant sects that eschew stained glass windows on the basis that they are figurative representations like paintings and sculptures deemed to be contrary to a literal interpretation of the commandment about graven images.

Share
Improve this answer
edited Jan 2 '15 at 14:13
answered Jan 2 '15 at 13:59
user17534user17534
Add a comment  |
Like any library, Christianity Stack Exchange offers great information, but does not offer personalized advice, and does not take the place of seeking such advice from your pastor, priest, or other trustworthy counselor.

4
Does Stained Glass art hold any special meaning for Catholics?

16
What are indulgences and when and why were they used?
8
When and where did the Catholic tradition of first communion at 7 years old start?
7
When and why did the Catholic Church first start issuing annulments?
4
Why did the early Christian church stop building and worshiping in temples?
7
When and why did the Catholic Church stop the Crusades?
4
Did Lot's daughters rape Lot?
3
Why the differences between the Maundy Thursday Mandatum and the Eucharist?
4
Did Chesterton ever explain why he did not formally become a Catholic until long after he had starting thinking and writing for Catholics?
1
Who were the recepients of Christian monumental sculptures in the early middle ages (10th and 11th century)?