Are Roman Catholics required at any time to bow down to statues or images?

If so, is it considered a sin not to?

Ignoring these without a grave reason and on purpose is considered to be Sin (provided other conditions are met). Note that these are just customs, no one is going to accuse a lay person if they don't follow these things; In-fact if you don't do this because you don't believe in what church teaches, then you have greater problems than worrying about these actions. But if you do believe, then as Card. Arinze says,

"If you believe that Christ is our God and He is present (in the Blessed Sacrament) why don't you kneel? Why don't you crawl? Why not show? Show respect."

Other than this there is no obligation on the part of Catholics to kiss or bow down to anything else (including persons).

Basically, it is an act of personal interior pious devotion.

However this ”no” needs a little more clarity to be understood. Even amongst Catholics there is a great amount of ignorance about this subject, simply due to the fact that many wholesome traditions have been lost or misunderstood since Vatican II.

Let me say something about both of these gestures.

There are three kinds of bows. (I hope all these distinctions aren't confusing. In fact, they're rather useful).

For guests who aren't accustomed to monastic ceremonial, it's a very impressive thing to see all the monks in choir practically disappear into the choir stalls as they all make a profound bow for every doxology. Another instance for this kind of bow - as I mentioned - is whenever we pass in front of the altar, as a way of saluting Our Lord, for the altar always represents Christ.

Try it next time you pass in front of the altar (that is, if the Blessed Sacrament is not there). Bend right in two, all the way down. Slowly, reverently. It is the Lord Himself you are greeting.

I was taught that in order to do a profound bow, one must cross your arms and be able to touch each knee with the opposite hand.

In traditional monasteries such as Fontgombault Abbey, the monks reverence statues of saints, Our Lady and Our Lord with a profound bow. This is an act of devotion which is not in any sense of the word a sin if it were not done.

One can see the diverse usages of bows at Fontgombault in this video. The Gregorian Chant is that of the monks of the same Abbey.

One must make a distinction when bowing and/or genuflecting towards the Blessed Sacrament in lieu of statues. For Catholics, the Blessed Sacrament or Holy Eucharist is in fact the Body and Blood of Our Lord Jesus Christ in the fullness of the Blessed Trinity and as such must reverence the Sacred Host as such: either with a genuflection or a profound bow. God is present amongst us in the Eucharist and not to reverence the Host with some form of external signs of devotion is being neglectful towards the Sacred. Not to do so, would be a sin if done intentionally and out a lack of respect. Even more, it is further not permitted to receive the Blessed Sacrament in the state of mortal sin. To do so, is also committing an additional mortal sin, more grievous than the one committed before.

Let us remember the words of St. Paul:

26For as often as you eat this bread and drink this cup, you proclaim the Lord’s death until He comes. 27Therefore, whoever eats the bread or drinks the cup of the Lord in an unworthy manner will be guilty of sinning against the body and blood of the Lord. 28Each one must examine himself before he eats of the bread and drinks of the cup. - 1 Corinthians 11:27

Back to statues. At the Vatican, there is a statues of St. Peter. The faithful, have had the tradition over the centuries to to either kiss the feet of the statue so much that the toes have been worn away. It is totally only a tradition to do so and is not a sin to forgo such a pious traditions. Many pilgrims simply do not touch or kiss this statue of St. Peter at the Vatican. I know, for I had the privilege of visiting the basilica some years ago. 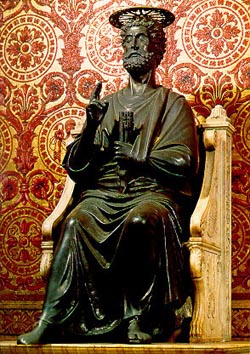 On this ancient bronze statue, St. Peter has his right toes worn down by centuries of pilgrims who traditionally touch the foot.

This ancient statue of St. Peter, portrayed as he gives a blessing and preaches, while holding the keys to the kingdom of heaven is famous throughout the world. Some scholars have attributed it to Arnolfo di Cambio (1245-1302), but others believe that it is a V century casting.

Pilgrims who come to the Basilica traditionally touch and kiss its foot, so that it is literally worn thin. In the Middle Ages pilgrims who reached Rome, touched and kissed the foot of the statue and prayed to St. Peter asking that he be merciful and open the gates of heaven for them if they died during the pilgrimage. - Statue of St. Peter

Catholics bowing to, touching or kissing statues, images or icons of Our Lord, Our Lady or the saints are done so out of pure devotion and is not a sin if not done.

Pope John Paul II in his Directory on Popular Piety and the Liturgy: Principles and Guidelines has this to say about such gestures:

It would be sinful for Catholics to handle such items in an irreverent manner or in an act of vandalism.

On Good Friday, all priests and faithful are encouraged to kiss the Crucifix during the liturgy of the Passion of Our Lord. The symbolism is extremely intense as symbolic gesture of love towards Jesus and the his redemptive actions on the Cross for our salvation. Again some only touch the crucifix, while other simply do not participate in this gesture.

The following articles may be of interest:

The Story of Our Lady of a Happy Death: Notre Dame du Bien Mourir

Unless one is familiar with the Catholic religion, one will find it odd, if not downright sacriligious, to bow down to bread and wine (inanimate objects per the OP).

From the Catechism of the Catholic Church paragraph 1378:

1378 Worship of the Eucharist. In the liturgy of the Mass we express our faith in the real presence of Christ under the species of bread and wine by, among other ways, genuflecting or bowing deeply as a sign of adoration of the Lord. "The Catholic Church has always offered and still offers to the sacrament of the Eucharist the cult of adoration, not only during Mass, but also outside of it, reserving the consecrated hosts with the utmost care, exposing them to the solemn veneration of the faithful, and carrying them in procession."

So yes, there are times when Catholics are required to bow to inanimate objects. To not do so, given what they believe (that the bread/wine has been transubstantiated into Christ) would be a sin.

3
Is there a dogmatic or theological (yet not dogmatic) justification for kneeling before a statue/icon of the Virgin Mary?

16
What is the Catholic position on Exodus 20:4?
6
Do they use icons in the Roman Catholic Church?
2
Are those that enter into a marriage that is later annulled required to do any penance?
6
Why do Catholics bow for icons of the Virgin Mary?
10
Has the prohibition against construction and veneration of statues and images been abrogated?
4
Is there a difference of substance between the veneration of Mary, and the worship of God?
2
Is the Dog-Headed icon of Saint Christopher canon in the Orthodox Church?