What is "spirit" in Holy Spirit?

Jesus taught the woman of Samaria that "God is spirit".

The answer to the Penny Catechism Q17. What is God? is God is the supreme Spirit, who alone exists of himself, and is infinite in all perfections.

As the Third Person of the Blessed Trinity, the Holy Spirit is God and consubstantial with the Father and the Son.

A diagram as one below is sometimes used to explain the mystery of the Blessed Trinity. 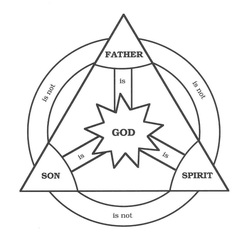 This is where it gets confusing for me. If each of the persons is God, then from the foregoing we can say

The Holy Spirit is the supreme Spirit.

Catholic perspective preferred but any others welcome from Christians who believe in the Blessed Trinity.

What is “spirit” in Holy Spirit?

primarily denotes the wind" (akin to pneo, "to breathe, blow"); also "breath;" then, especially "the spirit," which, like the wind, is invisible, immaterial and powerful.

What can be confusing is that the word "spirit" can be used in different ways.

God is called a spirit to differentiate him from the material world.

There is a person in the Godhead that is called the Holy Spirit because the work he does is similar to receiving a breath of inspiration. Both Jesus and God send forth the Spirit.

John 14:16-17 And I will pray the Father, and he shall give you another Comforter, that he may abide with you for ever; Even the Spirit of truth; whom the world cannot receive, because it seeth him not, neither knoweth him: but ye know him; for he dwelleth with you, and shall be in you.

John 16:13 Howbeit when he, the Spirit of truth, is come, he will guide you into all truth: for he shall not speak of himself; but whatsoever he shall hear, that shall he speak: and he will shew you things to come.

John 20:22 And when he had said this, he breathed on them, and saith unto them, Receive ye the Holy Ghost:

There is a function of the Holy Spirit as one by whom new life is imparted.

John 6:63 It is the spirit that quickeneth; the flesh profiteth nothing: the words that I speak unto you, they are spirit, and they are life.

Normally I do not even attempt to answer if there Catholic are LDS questions since I know so very little about either, however the problem of understanding that God is a spirit and accurately what it is. Seems to plague all the denominations.

Therefore; I have decided that I will undertake to try to help clarify the concept and characteristics of the spirit. As you so accurately stated God is. And in order to worship. We must worship him in spirit. But actually what is a spirit?

So let's look at Genesis and see if we can determine what is meant by in the likeness of God.

All Scripture is quoted from the new King James translation

Genesis 2:7 And the LORD God formed man of the dust of the ground, and breathed into his nostrils the breath of life; and man became a living being.

So God created man in his own image, and that certainly does not mean his the physical image. Since man and woman are very physically different, and that does not even take into account the difference between and a child and an elderly person.

And this may be the most miraculous part of God's image; in that he has now given man not only the ability to create eternal life, but he has also given him the responsibility for creating life in order to continue man's dominion over the animals. And even more amazingly that life which God gave man the ability to create is life eternal.

Genesis 2:7 And the LORD God formed man of the dust of the ground, and breathed into his nostrils the breath of life; and man became a living being.

In accordance with this Scripture God breathed from his own self, the breath of life. Since we are talking about being in the image of God, God is eternal and being eternal soul also must his breath be eternal. And the next part says that man became a living being. (Other translations say man became a living soul.)

So what does becoming a living being actually mean?

Without going into a lot of detail what that actually means is that man has three parts; a body, a spirit, and a soul.

There is one very great differences between man and God, in that God is discarnate (stripped of flesh). The most difficult problem that man has with understanding God, is that very point. When God created man he tied his spirit to a physical body, but God exists outside of the physical realm. The best way I can think of and to illustrate this is that God is like the air surrounding the Earth.

Perhaps this excerpt; which I copied from a website, but cannot tell you now which one it was, will help you to understand.

In a general sense, discarnate spirits are able to travel throughout the universe, and they do so by use of their will, or thought. they can travel at the speed of thought, or they may choose to do so at a speed in which they are aware of the space they are traversing. Matter does not obstruct the spirits' movement. They are able to pass through air, earth, water, fire, any man-made material, etc.

Man is constrained by the physical world. However; God is not because God created the material world, and so the dimension in which God exists is not the physical or material realm.

The human mind is not even capable of distinguishing between the temporal and the eternal. The material world is entirely temporal and that it must eventually pass away. The soul of man, the Angels, and the kingdom of God are eternal. Since man is unable to distinguish between the temporal and eternal how would he ever understand the Godhead which is infinite? What is meant by God being infinite is that God has no beginning and no end, this is the concept which man does not understand even though he may believe that he does.

The concept of the Trinity is the that the Godhead consist of three individual, and co-equal entities existing as one infinite being. Those three co–equal entities; we call for lack of better terms, the father, the son, and the holy spirit.

In each of these entities have, for lack of a better word, differing functions as part of the holy Trinity.

Since your question was directly concerning the Holy Spirit, the following website should be of interest to you. It has a much better explanation of the characteristics of the Holy Spirit than I can put into words.

St.Kolbe has a direct answer to your question.

When St.Bernadette asked, "Who are you?"

Mary introduce Herself not simply as the Mother of Jesus Christ, that St.Bernatte could easily relate to, but She answered, "I Am the Immaculate Conception". St.Kolbe, was puzzled, as if, Mary was possessed, by a "Divine Spirit".

In scriptures, the closest description of "Created Immaculate Conception" being a "spirit" or "divine person", is written in the mysterious wordings of Proverbs:22. There is a Spirit that gave birth to a spirit.

The LORD possessed me in the beginning of his way, before his works of old.

And this "spirit" dwell and rested in Mary's heart, that was hewn by Seven Sorrows or Seven Pillars.

Wisdom hath builded her house; She hath hewn out her seven pillars:

Then the creator of all things commanded, and said to me: and he that made me, rested in my tabernacle,-Sirach24:12

And, the play of words, is hard to grasp, if one, doesn't see that the word "tabernacle" refers to the heart of Mary, the Seat of Wisdom.

And to add another important verse, with regard to wisdom pertaining to a spirit that was qanah or birthed in reference to Proverbs8:22.

For wisdom is more active than all active things; and reacheth everywhere, by reason of her purity. 25For she is a vapour of the power of God, and a certain pure emmanation of the glory of the Almighty God: and therefore no defiled thing cometh into her. 26For she is the brightness of eternal light, and the unspotted mirror of God's majesty, and the image of his goodness.-Wisdom7:24-26

And finally to connect this view, to Catholic teachings, the Catechism teaches that the Abba Father had prepared a place to dwell for His Begotten Son and for the Holy Spirit in Mary, the tabernacle of God.

"Post it later, i will look for the CCC teachings.)

2
If God is a Trinity, are Father and Son manifestations of Divinity without being spirits?
3
"Spirit"of God the Father, Son and the Holy Spirit?