What are the positions relative to each other in the Catholic church's clerical hierarchy?

I sometimes find myself lost in my own church's different levels of clergy and the Catholic church's seems even more complex? What different positions in the clergy exist within the Roman Catholic church and how do they relate to one another in the church's governing structure?

The Catholic Church has the Pope as its head. The basic structure underneath the Pope consists of a number of bishops, each of whom is assisted by a number of priests. Priests, in turn, are assisted by deacons (who are ordained, just as priests are, but who cannot "advance in the rankings" as priests can).

However, there are a number of variances from this, and a lot of details to go into. Are you sitting comfortably? Then I'll begin ...

To understand the Church's governing structure, keep in mind that the Catholic Church is divided up into what are called particular churches. Most of the particular churches govern a specific area (usually called a diocese or eparchy) and are aggregated into a number of what are called a sui iuris ("in its own right") churches; the largest of these is the Latin Church. The various particular churches are each overseen by a bishop. (Some of the heads of the sui iuris churches called the "Eastern Catholic Churches" are given the title Patriarch. For example, the head of the Syriac Catholic Church, who is a bishop, has the title Patriarch of Antioch. The rest of the heads of the particular churches making up the various Eastern Churches are generally called eparchs.) Bishops are appointed by the Pope, with the advice of a dicastery (a standing department in the Vatican) called the Congregation for Bishops; they are ordained priests who are consecrated as bishops either by the Pope himself or by other bishops.

There are some regions of the world which have a fair amount of Catholics, but not enough to bear organization into a diocese led by a bishop. The Pope may organize these into an apostolic prefecture or the slightly more advanced apostolic vicariate, led respectively by a prefect apostolic or the higher-ranking vicar apostolic, an experienced priest—but not a bishop—who is entrusted with the spiritual care of the Catholics in the area. The Eastern Catholic Church equivalent of a vicar apostolic is an exarch.

Since an individual bishop isn't able to minister directly to perhaps tens or hundreds of thousands of people in his church, the Church allows him to delegate certain functions to priests, who (usually) are assigned to local areas, known as parishes, within the particular church. Some of these priests have historically been rewarded for their work by being designated Monsignor by their bishop, a title which doesn't carry any particular increase in rank. Often, as well, priests are assisted in their work by deacons, either transitional deacons who are seminary students studying for the priesthood, or permanent deacons who are ordained to the Order of Deacons, but will not advance to the priesthood.

Since some geographical areas are inevitably more economically and politically important, or simply more highly populated, than others, the dioceses or eparchies—the "particular churches governing a specific area"—are often grouped together into relatively small groups called ecclesiastical provinces, often coincident with political divisions such as states or provinces. Generally, the diocese covering the most important region of an ecclesiastical province will be ranked as an archdiocese (or archeparchy), usually what's called a metropolitan archdiocese, and will be governed by an archbishop—generally also eligible to be called a metropolitan bishop. For example, within the U.S. state of New Jersey, there are five dioceses: the Diocese of Camden, the Diocese of Trenton, the Diocese of Metuchen, the Diocese of Paterson, and the Archdiocese of Newark (the largest of the four cities, and the closest to New York City). A metropolitan archbishop doesn't rank above a bishop, but does have certain types of responsibilities and oversight over the other bishops in the province, who may be known as suffragan bishops.

A chorbishop, as I only just now found out, is a rank just below bishop in some Eastern Churches; these men have many of the duties and powers of a bishop, but not all. They are therefore ordained priests as well, but not bishops.

Some bishops are chosen by the Pope to join the group of clergy responsible for the selection of future popes. These are called cardinals. There are three ranks of cardinals: cardinal deacon, cardinal priest, and cardinal bishop. The cardinal bishops are the most senior leaders in the Church after the Pope, and cardinals as a whole rank above bishops. (Not all cardinals actually can select the next pope; cardinals are in office for life, but cannot vote once they reach 80 years old.)

As well as all these (as if they weren't enough!), there are also various religious institutes. These are often governed by a superior (more or less a supreme leader), who may have any of a number of titles. The Augustinians call their superior the Prior General; the Jesuits, the Superior General. These are equivalent to bishops.

Many religious orders are governed locally, organized into abbeys, convents, or priories. They are subject directly to their leader, who is subject (more or less) only to the Pope, and is thus pretty much equivalent to a bishop. This local leader may be an abbot or abbess, a mother superior, or a prior.

There are even more titles that I haven't gone into, but they're generally reserved for specific individuals (such as the senior cardinal-priest in the College of Cardinals, who is known as the protopriest). I won't go into all of those; this post is long enough already.

You mention a few titles which are not (or are no longer) titles of clerical personnel:

Generally I am averse to having competing posts. This answer is to add clarity to @MattGutting' answer because editing it would render it too long.

This article Hierarchy | New Advent makes this very important distinction, that there is a twofold hierarchy in the Church, that of order and that of jurisdiction1.

The Council of Trent defined that the first three grades2 of the hierarchy of order, i.e. the episcopate, priesthood, and diaconate are of Divine Institution. 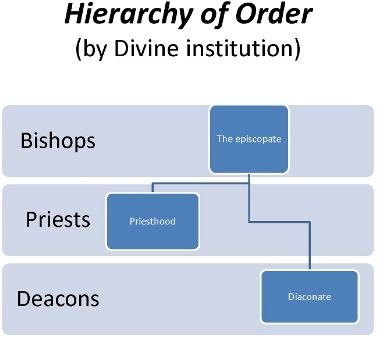 In the hierarchy of jurisdiction the papacy and the episcopate are of Divine origin; all the other grades are of ecclesiastical institution.

The composition of the hierarchy of jurisdiction in the (Western) Catholic Church by rank:

Please note that the above list gives a picture but is not exhaustive3 and also grades of ecclesiastical institution can come and go.

1. From the article: 'It is usual to distinguish a twofold hierarchy in the Church, that of order and that of jurisdiction, corresponding to the twofold means of sanctification, grace, which comes to us principally through the sacraments, and good works, which are the fruit of grace. The hierarchy of order exercises its power over the Real Body of Christ in the Eucharist; that of jurisdiction over His Mystical Body, the Church (Catech. Conc. Trid., pt. II, c. vii, n. 6).'
2. As if it was not already confusing, the hierarchy of order has grades of ecclesiastical institution such as subdeacon, acolyte, exorcist, lector, and porter
3. E.g. Prelates (not mentioned in article), rector, legates, Vicars Apostolic, etc.