How did the Virgin Mary's title “Mirror of Justice”, used in some Catholic prayers, originate?

The Catholic prayer often known as the Litany of Loreto1 contains a number of descriptive titles of Mary, the mother of God—for example, "Mirror of Justice", "Seat of Wisdom", "Star of the Sea". Some of these titles are mentioned in a Wikipedia article entitled "Titles of Mary".

Neither of the linked Wikipedia articles, however, gives much historical information about the origin of the titles. What history has been collected about their origin (presumably prior to their incorporation into the Litany)? In particular I'm interested in the title "Mirror of Justice", as that doesn't immediately seem applicable to Mary in the way that (for example) "Refuge of Sinners" does.

Introductory History of the Litany of Loreto

The Litany of the Blessed Virgin--also called the Litany of Loreto--is one of the many Marian litanies, or praises of Mary, composed during the Middle Ages. The place of honor it now holds, in the life of the Church, is due its faithful use at the shrine of the Holy House at Loreto, which, according to tradition, was the small cottage-like home where the Holy Family had lived and which was miraculously transported by angels, in 1291, from the Holy Land to its present location in Loreto. It was definitely recommended by Pope Clement VII and approved by Sixtus V in 1587, and all other Marian litanies were suppressed, at least for public use. - Source: The History of the Litany of Loreto.

The Blessed Virgin Mary, Mother of the Church, teaches her children obedience to the Church’s discipline. [...]

One of the titles by which we address Our Blessed Mother in the Litany of Loreto is Mirror of Justice, Speculum Iustitiae. Simply put, the title reminds us that we see in Mary the image of how to live in obedience to God’s law and so grow in the likeness of Christ, that is, grow in the pure and selfless love of God and of our neighbor. It should not surprise us that, when the faithful have a strong devotion to the Blessed Virgin Mary, they are also strong in their obedience to Christ and to those who act in His person as Head and Shepherd of the flock in every time and place, namely, the Holy Father and the Bishops in communion with him, together with the priests, their co-workers. - Source: Obedience to the Magisterium and the Responsibility of Bishop toward the Laity | Cardinal Burke | Marian Catechist Apostolate.

History of the Symbol of Mary Mirror of Justice (Speculum justitiaé)

Its origin [of the Litany] is believed to be a medieval rimed litany (see Paris manuscript Nat. lat. 5267, fol., 80r) influenced by Eastern Marian devotion, in particular by the famous Hymnos Akathistos. Contrasting with the older Litany of All Saints, the Loreto Litanies are purely ad- or invocational litanies. As can be observed, for example, in the so called Officia Mariana, many more Marian litanies were and are in use but destined for private devotion.

This mentions when the litany originated and under what influence.

The article continues to explain the structure of the litany and under 4. Symbols of Mary it says:

We then have thirteen symbolic advocations, mostly taken from the Old Testament and applied to Mary which highlight her virtues and her eminent role in salvation history: 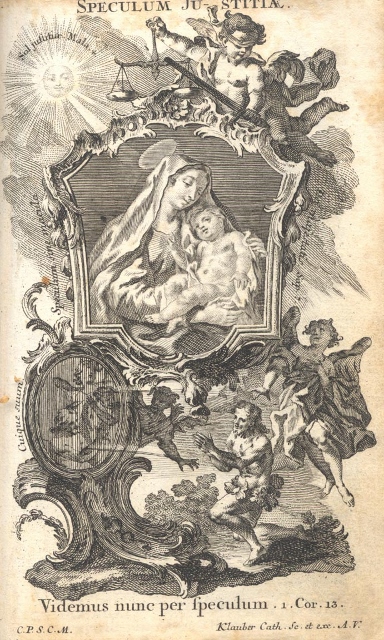 The various symbolic meanings of the mirror highlight: (1) purity of the soul, (2) self-knowledge and moral integrity, as well as (3) its ability to reflect reality. Mary's soul is holy and pure. She reflects the Sun of Justice, meaning God's perfection and holiness. She is the mirror without blemish of God's majesty (Wisdom 7:26). The Sun of Justice is reflected in the image of Mother and Child. The angel with balance and sword, usually a symbol of justice, signifies God's perfection. There is a second and oval mirror whose surface is tainted and marred. In it, three shadowy silhouettes can be barely perceived, featuring Adam or sinful humanity between Good and Evil, that is Satan, beckoning and tempting, and the guardian angel watching over his protégé. This mirror does not reflect light and perfection but darkness and sin, or at least the blurred human vision of God and eternity.

Thus Paul reminds us that "at present we see indistinctly as in a mirror, but then face to face" (1 Corinthians 13:12).

Not the answer you're looking for? Browse other questions tagged catholicism history virgin-mary origin mariology or ask your own question.

15
How did the practice of soliciting the prayers of dead saints originate?
7
Where did the Petrine title of “First Among Equals” originate?
2
When & where did the word “Christian” originate?
10
Is “Mary Queen of the Universe” a recognized title for the Virgin Mary in Catholicism?
8
When did the idea of a scriptural “canon” originate?
6
How far advanced was the Virgin Mary's Pregnancy when she returned to Nazareth?
0
Did the myth of the holy grail originate from Catholicism?
4
According to the Catholic Church, was Mary's Magnificat a spontaneous utterance?
1
How do Protestants explain Zechariah 12:10-14, used by Roman Catholics to prove Mary's perpetual virginity?