How was Lucifer created? [closed]

Was Lucifer created by God or was he already there in the beginning like God? I don't think the Bible really explains any of this.

Through modern revelation in the Church of Jesus Christ of Latter-Day Saints, we know that Satan, also called the adversary or the devil, is the enemy of all righteousness and of those who seek to follow God. He is a spirit son of God who was once an angel “in authority in the presence of God”.

But in the premortal Council in Heaven, Lucifer, as Satan was then called, rebelled against God. Since that time, he has sought to destroy the children of God on the earth and to make them miserable.

Prior to his rebellion, Lucifer was not unlike the other angels in heaven, he would have been created as they were:

"For by him were all things created, that are in heaven, and that are in earth, visible and invisible, whether they be thrones, or dominions, or principalities, or powers: all things were created by him, and for him:" (1 Colossians 1:16)

In the words of Jesus:

Mark 12:24 And Jesus answering said unto them, Do ye not therefore err, because ye know not the scriptures, neither the power of God?

In the following verses you will find that the Angels are in Heaven and that all things in Heaven were created by God.

Mark 12:25 For when they shall rise from the dead, they neither marry, nor are given in marriage; but are as the angels which are in heaven.

Mark 13:32 But of that day and that hour knoweth no man, no, not the angels which are in heaven, neither the Son, but the Father.

Colossians 1:16 and 17 For by him were all things created, that are in heaven, and that are in earth, visible and invisible, whether they be thrones, or dominions, or principalities, or powers: all things were created by him, and for him: 17 And he is before all things, and by him all things consist.

Revelation 4:11 Thou art worthy, O Lord, to receive glory and honour and power: for thou hast created all things, and for thy pleasure they are and were created.

So the Bible does say that the angels were created by God, and not only that but they were created for his pleasure. As was all else. Sometimes we have do some hearty research in order understand that God is omniscient, and also Omnipotent, and to find just where some answers to our questions are in the Bible.

Even though some answers are harder to discern than others I assure you they are all there, and that's where this site is such a boon to people. Christians have all learned different lessons through circumstance in life and it is that peculiar knowledge that we try to share on this site.

To attempt to answer this question, we need to look at the history of names and titles.

First and foremost, the name Lucifer exists once in the the Bible and only in the King James Version.

How art thou fallen from heaven, O Lucifer, son of the morning! how art thou cut down to the ground, which didst weaken the nations!

Looking at the Hebrew version we find the word הילל hêylêl means "shining" or in the sense of brightness - which is usually associated with Seraphim (more about them later). Furthermore the same word can be found in other translations of the bible and was referring to the morning star. As seen in:

How you have fallen from heaven, morning star, son of the dawn! You have been cast down to the earth, you who once laid low the nations!

It is quite popular to believe that Isaiah is talking about King of Babylon - Nebuchadnezzar and not Satan.

This whole section (vv. 4b-21) is directed to the king of Babylon, who is clearly depicted as a human ruler. Other kings of the earth address him in vv. 9ff., he is called "the man" in v. 16, and, according to vv. 19-20, he possesses a physical body. Nevertheless the language of vv. 12-15 has led some to see a dual referent in the taunt song. These verses, which appear to be spoken by other pagan kings to a pagan king (cf. vv. 9-11), contain several titles and motifs that resemble those of Canaanite mythology, including references to Helel son of Shachar, the stars of El, the mountain of assembly, the recesses of Zaphon, and the divine title Most High. Apparently these verses allude to a mythological story about a minor god (Helel son of Shachar) who tried to take over Zaphon, the mountain of the gods. His attempted coup failed and he was hurled down to the underworld. The king of Babylon is taunted for having similar unrealized delusions of grandeur. Some Christians have seen an allusion to the fall of Satan here, but this seems contextually unwarranted.

However orthodox/mainstream Christianity has attributed the name Lucifer to Satan.

Therefore, I could stop here and say that Lucifer was created in the imagination of man who incorrectly associated the name to Satan. The association is more than likely due to (or at least solidified by) Paradise Lost, an epic poem by the 17th-century English poet John Milton (1608–1674). There is NO Biblical support for the association between Lucifer and Satan.

Digging into your question a bit, let's "assume" that you intended to ask, "How was Satan created?"

Satan comes from Judaism; "Satan" is from the Hebrew word for "adversary." Satan was existed in the traditions of Judaism as the heavenly prosecutor in what Christians call the Old Testament long before the incarnation of the logos aka the birth of Jesus.

One day the angels came to present themselves before the Lord, and Satan also came with them.

Satan's origins are hinted at here:

Through your widespread trade you were filled with violence, and you sinned. So I drove you in disgrace from the mount of God, and I expelled you, guardian cherub, from among the fiery stones.

Therefore, this begs the question... "When were the cherubim created?" For further information regarding the hierarchy of angelic beings please read this. And for FYI, "cherub" exists 26 times in the KJV of the Bible. That's 26 more times than the name 'Lucifer" in the KJV.

When were the cherubim created?

I do not know, the bible is not clear on this. However it does suggest the power that they have in Isiah:

Lord Almighty, the God of Israel, enthroned between the cherubim, you alone are God over all the kingdoms of the earth. You have made heaven and earth.

Here is a popular depiction of the order from Matthaeus (Matthäus) Merian the elder (1593-1650). 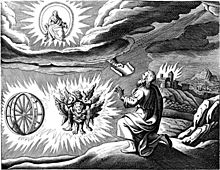 I will do some more research and append to this answer, please check back...

Not the answer you're looking for? Browse other questions tagged creation satan or ask your own question.

29
What is the Biblical basis for saying Lucifer is an angel?
10
What are the differences between cherubim and seraphim?

9
What is the origin of the account of Lucifer found in Milton's Paradise Lost?
0
Was Satan/Lucifer the angel of music before his fall?
0
How is it possible that the angels were on hand to witness the earth being created?
1
How do those who believe that Jesus is a created being understand the verses which say everything that was created was created by him?