Why is Mary Magdalene the patron saint of hairdressers?

Why is Mary Magdalene the patron saint of hairdressers and when was the first time she was assigned this role?

To answer the "when" question, the exact date is unknown (patron saint assignments were not decided by official decree, but rather were adopted by people over time), but the association dates back to at least the Middle Ages.

As alluded to by previous answers, there are two theories on "why" question.

Because of this association, Mary was usually depicted as having long hair in medieval art. Naturally, a woman always depicted with long, flowing hair is a good choice for hairdressers to adopt as a patron saint. 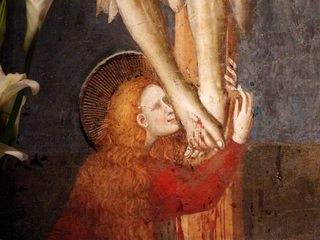 A medieval legend reinforces the idea that her hair had become to be seen as her key trait. In the legend, Mary, Martha, and Lazarus bring the Gospel to France. After spreading the Gospel, Mary retires to a cave to pursue a contemplative, solitary life. Over time, her clothes wear out but miraculous her hair grows to cover her entire body, preserving her modesty. 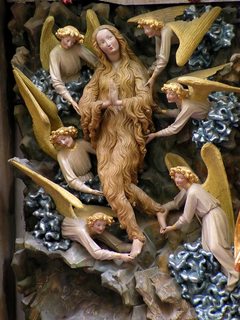 Mary, covered in hair, being lifted up by angels

An alternate theory is that Mary Magdelene's actual profession was that of a hairdresser, or at least that she was associated with the profession from a very early date. There are two references in the Talmud to a Miriam megaddelah nashaia (Mary, the plaiter of women’s hair). While it is debated whether this Miriam (Mary) is actually the same person as Mary Magdelene, it does raise the interesting possibility that "Magdelena" does not refer to a place name, Magdala, as traditionally thought, but rather a profession, megaddelah. Since surnames weren't in use yet in the first century, people were often given nicknames to distinguish them from others with the same name. Such nicknames could refer to a place of origin, but could also refer to a profession (among other things), so the theory is at least plausible.

Certainly it would a funny coincidence if Mary's nickname just happened to resemble a word she later came associated with for completely unrelated reasons.

The book Flower, the Story of the Nativity (p126-27), by Wayne E. Stahre, includes an interesting footnote in reference to this:

Mary Magdalene is the patron saint of hairdressers. The Talmud refers to a "medadela neshaya," which apparently means "women's hairdresser." The word "megadela"or "mgadla" has a phonetic connection to the name "Magdalene," and so Mary Magdalene may have thus been connected to hairdressers by the third century, when the Talmud was begun.

More analysis on this is available on oztorah.com, which also considers this connection a possibility but also suggests that Magdalene may refer to geography, not profession.

Whence she was called Magdalene, doth not so plainly appear; whether from Magdala, a town on the lake of Gennesaret, or from the word which signifies a plaiting or curling of the hair, a thing usual with harlots.

Dates more specific than this ("third century" in the first quote) may be difficult to come by, but another possibility is that the connection became more common once Pope Gregory I connected Mary Magdalene to the anonymous sinner who anointed Jesus' feet with oil and then wiped them with her hair (see Luke 7:36-38 and Luke 8:1-3). The homily (XXXIII) in which he did this was delivered around AD 591.

Why is Mary Magdalene the patron saint of hairdressers and when was the first time she was assigned this role?

Historically speaking we do not know when St. Mary-Magdelene became the patron saint of hairdressers. But it can be reasonably assumed that it came about during the Middle Ages.

As to why St. Mary-Magdelene is the patron saint of hairdressers is a little more complicated to answer.

Wikipedia tells us that she is the patron saint of the following trades, people and locations or dioceses:

It is extremely rare for Rome to declare someone the patron saint of a partial trade. Patron saints would thus be named as such as those of the particular trade and some historical or pious link to the profession in question. St. Mary-Magdelene is no exception.

There seems to be three possible reasons for this. She possibly was an actual hairdresser. Because she had anointed Our Lord’s feet and washed them with her hair. Or however it may simply may have been due to her beauty and long hair as well as living in a locality where hairstyles were quite fashionable.

There is a fourth possibility and it is my person favourite: all three of the above together.

I do not desire to repeat the the excellent information given in the answers of ThaddeusB and Nathaniel so I will simply try to add a little more light on this subject.

“Three Saints,” said our Lord to St. Bridget of Sweden, “have been more pleasing to me than all others: Mary my mother, John the Baptist, and Mary Magdalene.” The Fathers tell us that Magdelene is a type of the Gentile Church called from the depth of sin to perfect holiness; and indeed, better than any other, she personifies both the wanderings and the love of the human race, espoused by the Word of God. Like the most illustrious characters of the law of grace, she has her antitype in past ages. Let us follow the history of this great penitent as traced by unanimous tradition: Magdalene’s glory will not be thereby diminished. - Who is Saint Mary Magdalene?

Jesus and Saint Mary Magdalene were real people. They are compelling historical figures whose lives intertwined in the most significant historical drama ever. Each person evokes intense interest because of the way they lived their lives, and the influence they had on their times, and our times. It is not surprising there is speculation about the details of the relationship between Jesus of Nazareth and Mary of Magdala, as she is more properly known (and as I will refer to her from now on).

What follows is an attempt to bring Mary of Magdala to life, using the Gospels, tradition, visions of credible Christian mystics, and other sources (listed at the end of article).

Magdala was a wealthy fishing village on the western shores of the Sea of Galilee. A town of only 3,000 inhabitants, Magdala’s wealth came from the fish caught there, which were then dried, salted, and exported. Fish as food had no kosher restrictions, so it was a popular commodity. According to the Talmud, Magdala was so wealthy its tributes to Jerusalem were conveyed by wagons. 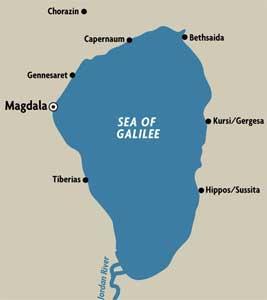 For Jews the word ‘Magdala’ denoted a woman with loosed or plaited hair – in plain words, a harlot. Magdala the town had a reputation as lurid as its name. According to the Talmud, Magdala was destroyed by the Romans for its perversity (the Jewish War may have had something to do with it too). One thousand years later medieval writers interpreted ‘Magdala’ as ‘tower’ (from the Hebrew migdal). There were towers in Magdala that were spared by the Romans when they razed the town. One of the towers was the home of Mary of Magdala (or the Magdalene, as she is more commonly known).

It is more likely that the Magdalene was a courtesan than a street prostitute. She was born into wealth, property, and influence. Given what we know about her parents and siblings, Mary was almost surely intelligent and talented. All legends about her agree on one other point – she was very beautiful. Blessed Sister Emmerich described her as:

“taller and more beautiful than the other women…robust, but yet graceful. She had very beautiful, tapering fingers, a small, delicate foot, a wealth of beautiful long hair, and there was something imposing in all her movements…”

In short, she was a young woman accustomed to privilege, who from an early age was exposed to all that was good and refined in life. It is doubtful Mary ever traveled in common circles.

She may have even adorned Herod’s court in Tiberias (named after the reigning Roman emperor), only three miles away from Magdala. Herod built the city Roman style, with a stadium, baths, temples to the gods, theaters, and aqueducts. Since Tiberias was more Roman than Jewish, and since a Jewish cemetery was desecrated during its construction, Herod had trouble populating his new city. Pious Jews considered Tiberias a monstrosity of impurity (they had a point). Herod eventually offered free land, which lured to Tiberias criminals and others for whom purity was not a preoccupation. - Jesus and Mary Magdalene

Given the social status of our beloved saint it is quite possible that she may have been a hairdresser, but historically this is not possible to ascertain. We know she was a very beautiful woman and that she did in fact anoint Our Lord’s feet. Thus I believe that it is the combination of all three elements that made people to adopt St. Mary-Magdelene as the patron saint of hairdressers. 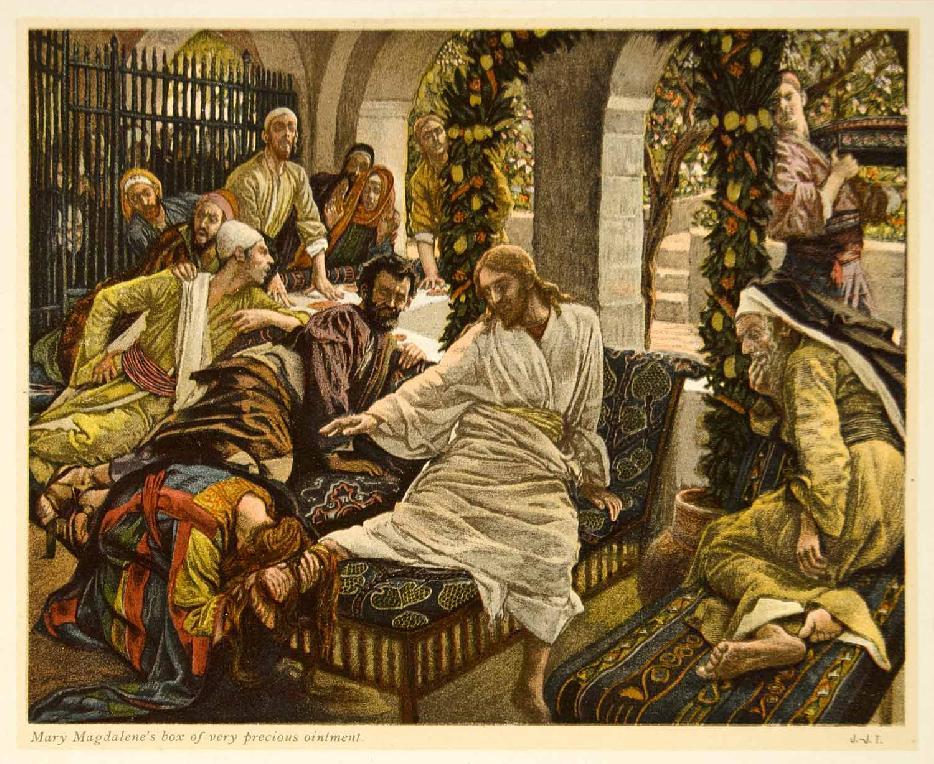 One final note on the person of St. Mary-Magdelene. She so loved the Lord that at his Crucifixion she nearly went mad.

The Blessed Virgin endured all this torture with Jesus. She was pale as a corpse, and low moans of agony sounded from her lips. The Pharisees were mocking and jesting at the side of the low wall by which she was standing, therefore John led her to the other holy women at a still greater distance from the circle. Magdalen was like one out of her mind. She tore her face with her fingernails, till her eyes and cheeks were covered with blood. - Life of Jesus Christ by Anne Catherine Emmerich

Not the answer you're looking for? Browse other questions tagged catholicism patron-saints mary-magdalene .