How does the mainstream Christian view of the physical body differ from that presented in The Gospel of Thomas?

What is the value of the physical body in mainstream Christianity? Sometimes it seems to be very negative and to encourage one to concentrate primarily or even almost solely on the spiritual realm.

Other times looking after the body with Biblical references to it as a temple for the holy spirit and the like.

What is the mainstream Christian view of the physical body?

Specifically, I'd like to compare and contrast the understanding of the body as found in the Gospel of Thomas with Nicene Christianity. Are the two incompatible?

Mainstream Christianity views the body as the temple of Christ. The tool with which God uses to do good on the Earth He created.

18 Flee immorality. Every other sin that a man commits is outside the body, but the immoral man sins against his own body. 19 Or do you not know that your body is a temple of the Holy Spirit who is in you, whom you have from God, and that you are not your own? 20 For you have been bought with a price: therefore glorify God in your body.

God told us that He lives within us, doing His works through the Holy Spirit which has come down upon us.

The Holy Spirit decending on His followers...

Jesus sends the Holy Spirit in the form of fiery tongues on His Apostles and disciples. 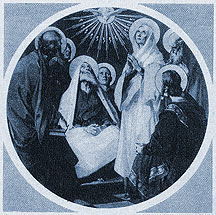 The Roman Catholic Church (a main part of Nicene Christianity) does not regard the body as inherently evil, but rather, prone to distractions and temptations. It is with the Spirit that one must cleanse his mind and try to do what Jesus would have done. Since He was without sin, the ultimate goal in our faith is to be examples of Our Savior.

This is not only the belief of the Catholic Church, but of nearly all Nicene Christianity denominations. It happens to be very clear in one of the oldest Christian churches, and is acted upon regularly in the Catholic Faith.

With little faith, the body is extremely harmful to the soul. Therefore, we as Catholics do Penance and examine our conscience for faults.

In contrast to Gnosticism...

Gnosticism believes that all matter itself is evil of its own nature.

This shows that there is a great dualism between Gnosticism and Nicene Christianity.

[Gnosticism believes] Duality of spirit and body: Spirit is of divine origin and good; the body is inherently earthly and evil. Gnostics were hostile to the physical world, to matter and the human body.

Here's an entry on the New Advent Catholic Encyclopedia discussing what Gnosticism is (http://www.newadvent.org/cathen/06592a.htm) One can see that the prevailing argument negatively labels it in relation to mainstream Christianity.

In contrast to the 'Gospel of Thomas'...

One person's interpretation of the 'Gospel of Thomas' from Misericordia University (http://users.misericordia.edu/davies/thomas/faq.htm):

Is the Gospel of Thomas Gnostic?

It all depends on what you mean by Gnostic. If you mean by Gnostic the belief that people have a divine capacity within themselves and that they can come to understand that the Kingdom of God is already upon the earth if they can come to perceive the world that way then Thomas is Gnostic. But if you mean by Gnostic the religion upon which the Nag Hammadi texts are based, a religion that differentiates the god of this world (who is the Jewish god) from a higher more abstract God, a religion that regards this world as the creation of a series of evil archons/powers who wish to keep the human soul trapped in an evil physical body then no, Thomas is not Gnostic. This differentiation is very important, because some scholars reason that if Thomas is Gnostic (in the first sense) then it is Gnostic (in the second sense) and, as they believe, Gnosticism (in the second sense) is a second or third century heresy, they conclude that the Gospel of Thomas is heretical, late in date, and without very much historical value in regard to Jesus of Nazareth.

While this quote may be heavily biased, it brings to light somewhat of a split within Gnosticism that is believed by many Gnostic people even though no documentation is given to support it. This separation of 'modern' Gnosticism is the distancing from heretical teachings that have been nearly universal in Gnostic beliefs (probably in order to gain acceptance).

To clear up the Catholic Church's perspective on the Gospel of Thomas, you might read these two questions 1 2 on http://www.catholic.com/

Nicene Christians believe that the body must be used in a way that is directed by, and pleasing to God Almighty. God sent His Son to redeem us from our faults, and sent His Holy Spirit to watch over us from within. Gnosticism is not Christianity and is entirely contrary to Nicene Christianity in this respect. We must only pray that He may give us the strength to ratify our actions.

Not the answer you're looking for? Browse other questions tagged nature-of-man human-body gospel-of-thomas .

18
Why is the Gospel of Thomas considered heretical by Nicene Christians?

13
How similar was the resurrected body of Jesus to his physical human body?
11
What is the basis for saying that the Gospel of Thomas was accepted as scripture by early Christians?